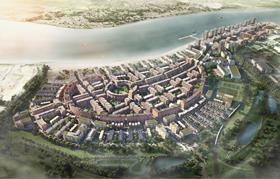 Balfour Beatty, Carillion and Volker Fitzpatrick have all been shortlisted for the job. Transport for London (TfL) said construction could start late next year if a Transport and Works Act Order is approved by the transport secretary.

The scheme will see the Overground line between Gospel Oak and Barking extended by 4.5km to Barking Riverside.

But despite developer Barking Riverside Ltd – a reformed JV between the Greater London Authority and housing association L&Q after housebuilder Bellway sold its 51% stake – receiving planning permission for 10,800 homes, only 1,200 can be built until improved public transport access is provided.

The east London suburb is one of the most isolated in the capital and suffers from a lack of transport infrastructure, with the A13 currently the only link in and out of the area.

And according to reports, healthcare facilities will only be open in Barking Riverside once 10,000 people live there.

Jonathan Fox, TfL’s director of London rail, said the Overground extension would be “key to regenerating this part of east London” and added that the scheme will “help Barking Riverside to grow and develop.”

If the extension is approved, train services are expected to begin in 2021.