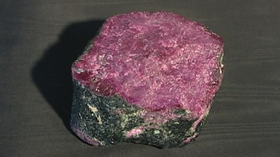 The Gem of Tanzania

Two former directors of Wrekin Construction have been banned from acting as directors after using a ruby to inflate the troubled company’s accounts.

The Insolvency Service has banned David Unwin and Nicholas Ibbotson after the 2kg ‘Gem of Tanzania’ was bought by Unwin in 2006 and listed by his company Tamar Group as worth £300,000, before being transferred to Shropshire-based civil engineer Wrekin in 2007 with a worth of £11m.

Unwin is now banned for ten years, while Ibbotson is banned for seven years.Their bans follow a ban made against a third director Peter Greenwood in 2011.

The bans prevent the three from being involved directly or indirectly in the promotion, formation or management of a company for the duration of their bans.

The Insolvency Service found that, in the weeks prior to the company falling into administration, Unwin had acknowledged in meetings with former auditors that there were “uncertainties” over the gem’s value.

The valuation was supposedly carried out in Italy four months prior to the transfer to Wrekin, but Unwin gave differing accounts of how he obtained the report during investigations.

Ibbotson was also aware of the uncertainties, but told Wrekin’s new auditors that £11m was a genuine market value.

The ruby enabled Wrekin to make it seem like it had a surplus of £6.3m, when it was actually insolvent.

In the lead up to the company’s collapse, Unwin also made substantial payments to other companies controlled by him.

Wrekin sold a substantial amount of machinery in the transfer to Equatrek, which Unwin then bought back from Equatrek at £749,000 more than the sale price.

Pabitar Powar, head of the authorisations team at the Insolvency Service, said: “The purchase of an uncut ruby gemstone by Wrekin was extraordinary and questionable.

“It is clear that the gemstone was included in the accounts to portray Wrekin’s financial position as a sound one, whereas its true position was the exact opposite.

“Transferring funds to connected companies for no financial gain at a time when Wrekin was insolvent and under severe financial pressure clearly put the creditors at increased risk.

“Furthermore, a business deal which involved the creation of a sham invoice ought to have set alarm bells ringing for the directors and made them question the appropriateness of the whole deal in the first place.

“Directors who recklessly present misleading information in this way damage the confidence of companies to do business with each other and undermine the business environment.

“These bans are a warning to other directors who might act recklessly and without due regard to the interests of creditors, that the Insolvency Service will investigate and remove them from the business environment.”