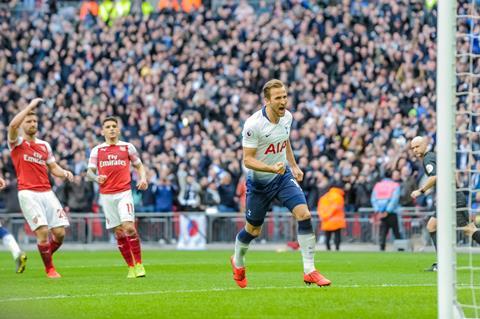 Harry Kane scored Tottenham’s equaliser in a 1-1 draw against Arsenal at Wembley stadium last Saturday. The club has not yet said where its remaining league and Champions League games will be played

Uefa has again held out the possibility Spurs might be able to play a Champions League match at its new ground this season – provided Mace finishes it in time.

The club progressed to the last eight of the competition on Tuesday night after a 4-0 aggregate win over German side Borussia Dortmund.

Asked whether Spurs would be allowed to play its quarter final at its new ground, Uefa told Building it remains “in close contact with Tottenham Hotspur to assess the possibility of the club hosting UEFA competition matches in their new stadium this season”.

Home and away quarter final ties will be played across 9/10 and 16/17 April, with Spurs finding out their opponents and the order of the ties next Friday.

In order for the stadium to be granted a safety certificate ahead of opening, two test events must be held at the new ground – although no events have yet been publicly confirmed by either the club or local council, Haringey.

Tottenham’s last game at its temporary Wembley home was on Saturday against north London rivals Arsenal but it has yet to say where its remaining league and Champions League games will be played.

In an update to fans last month, the club said remedial works on the safety systems had still not finished forcing the Arsenal game to be switched to Wembley.

But it added these “are near completion and we shall then move forward to the final stages of testing the fire detection and alarm system and its integration with the other safety systems.

More than 12,000 alarms have had to be checked and last month over 1,000 workers were still on site carrying out work.

Homeward bound – who might Spurs’ first opponents at new ground now be?

Tottenham’s Champions League quarter final first leg match against Manchester City is also to be played at the new ground, along with a semi final home leg should the club prevail against the current Premier League champions.

The club was due to open the stadium against Liverpool on 15 September last year, but a series of delays meant that Tottenham has played 20 fixtures away from White Hart Lane.

It will now play its final five Premier League home matches - against Crystal Palace, Huddersfield Town, Brighton and Hove Albion and Everton - at the new ground.