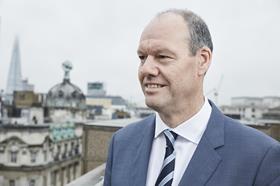 Mace has broken its silence over its problems on Tottenham Hotspur’s late-running stadium with the firm blaming faulty wiring for the ground busting its opening deadline.

The news came as the pair met yesterday (Tuesday) morning to set out a new opening timetable after the club last week blamed “safety critical issues” for the delay.

And he said pictures showing an incomplete stadium, which have been published since news of the delay broke, were misleading. “Many of the outstanding external elements of the build are cosmetic and are not required for the stadium to open for the first football game.”

Spurs, which has been forced to go back to using Wembley stadium, its temporary home for the whole of last season, is not expected to unveil a new timetable for when the 62,000 seat ground will open until next week at the earliest.

Reynolds (pictured) added: “Follow up meetings continue to take place with trade contractors where the situation and planned timetable are being reviewed to rectify and re-test. We shall then be in a better position to outline the revised timetable for opening.”

Reynolds revealed that it only began work on the stadium’s cable net roof less than a year ago and it has still not been finished. “[A cable net roof] requires all of the structure to be completed in order to begin…The roof was always scheduled as one of the last activities and is now due to be substantially complete at the end of August.”

Mace only took over the whole site last May, the day after Spurs played its last game at its historic White Hart Lane ground against Manchester United in the middle of that month.

This gave Mace just over 15 months to complete the ground with this phase of the job given over to building a 17,000-seat South stand and the erection of the roof.

Asked whether the August deadline had ever been achievable, Reynolds would only say: “We’ve always worked hard to achieve the quickest possible programme for the project. Mace and Tottenham have achieved a huge amount to date.”

Thousands of workers are still on the site with Reynolds saying that the project reached a peak workforce of 3,800 last month.

Reynolds, who revealed that he has visited the site every week since Mace took control of the old stadium last year, said the firm is carrying out the job under a construction management contract after first being appointed as construction advisor in late 2015.

He said it was the “most appropriate way to deliver the stadium” and added: “The details of our contract are confidential but are not different from an industry standard construction management contract.” This has seen Mace manage the stadium’s contractors and Reynolds added: “As such their contracts are directly held with Tottenham Hotspur.” 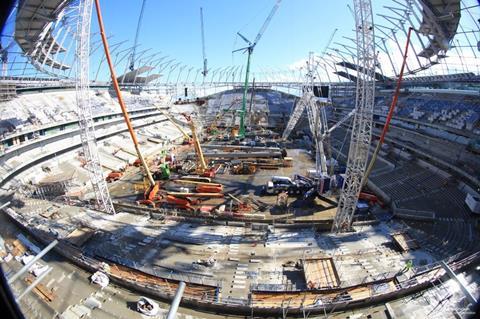 How the stadium looked at the beginning of May…

Reynolds declined to say how much the stadium was costing but the scheme is widely believed to have more than doubled from its estimated £400m original cost. But Reynolds said: “The figures quoted have included other works aside from the stadium itself.”

Spurs has had to cancel two test events at its ground, which will be the biggest club venue in the capital, that were due to be held this coming bank holiday Monday, as well as a game on Saturday week.

The stadium was supposed to open in time to host its inaugural Premier League game against Liverpool on 15 September but the has club admitted its game against reigning Premier League champions Manchester City at the end of October is also in doubt. An NFL game between Seattle Seahawks and Oakland Raiders scheduled for 14 October has also had to be switched to Wembley. 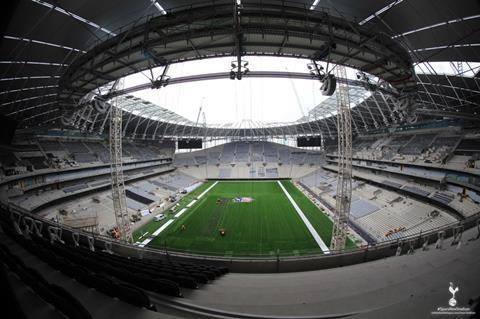 …and how it looked in the middle of June