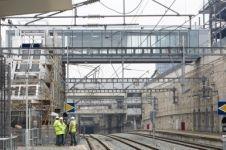 More than 1,000 UK firms have so far won contracts from the Olympic Delivery Authority (ODA), according to new figures released today.

The total value of contracts awarded for building the venues and infrastructure for the 2012 London Olympics exceeds £5bn, with 98% of suppliers based in the UK. Over two-thirds of the 1,036 firms awarded work are small and medium-sized firms, where company size is known.

Work on site at Olympic park this summer

While more than one-quarter of suppliers are based in one of the five host London boroughs, firms across the UK have shared in the benefits, with 46% based outside London, including in Scotland and Northern Ireland

ODA chairman John Armitt said: “Thousands of companies across the UK are already winning gold from London 2012. Businesses of all sizes and from every sector are working together to deliver the largest project this country has seen for generations and are reaping the benefits of millions of pounds worth of work.

“For example, a Scottish company has won a contract to build the basketball structure and a Northern Irish company is constructing the main pedestrian bridge within the Olympic park.

“There are still golden opportunities up for grabs through the UK-wide supply chains, so companies should sign up to CompeteFor to be part of a unique opportunity to showcase UK plc to the world.”