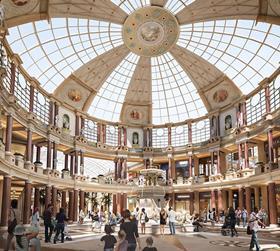 Turnover has fallen away at Vinci Construction’s UK business as the firm moves to become more selective in the jobs it takes on.

In a quarterly update for the three months to 30 September, the French construction conglomerate reported that revenue across its global construction business had dipped by 0.7% to €10.1bn (£8.9bn) compared to like-for-like income for the same period last year,

In the update, Vinci said: “Revenue grew in central Europe, Asia and Oceania but declined in Africa, the UK and business areas related to the oil and gas industry.”

The firm said orders fell by 6% due to “a more selective approach to taking on new business”.

In the summer, the UK business, which has been hit by ongoing problems with a tram scheme in Nottingham, won a £52m deal to revamp the Trafford Centre’s Barton Square (pictured) for shopping centre specialist Intu.

In its last set of results, Vinci UK ramped up its profitability thanks in part to a “major contribution” from the sale of land on the site of the New Covent Garden Market scheme at Nine Elms in London.

Vinci is due to publish its group financial results for the year to Decemeber 2018 on 6 February next year.