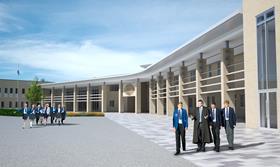 King’s School in Macclesfield, where fees are £13,000 a year, is spread across three sites which will be condensed into one area with the construction of a 350-room building.

The school has funded the scheme by selling two Macclesfield sites to house builders.

Vinci is joined on the job by Pick Everard, providing design and engineering services, with completion expected in May 2020.

Other former pupils include Curtis’s bandmate Stephen Morris, who later went on to help found New Order after the singer’s death in 1980, and former England rugby union captain Steve Smith.