Whitehall cuts construction costs by up to 7%

Government departments have already made construction cost savings of as much as 7% according to official figures published today, as the government launches the next phase of its construction strategy.

It is the first time that progress has been published since the policy to reduce construction costs by 15-20% by 2014/15 was outlined in the summer of last year.

The government has today also published the identity of public projects to be used to pilot new forms of procurement (see box).

This shows that the Department of health’s procure 21 programme, the school building programme run by Partnerships for Schools, and the Ministry of Justice are on course to make savings of 6%, 7% and 7% respectively by the end of the 2011/12 financial year compared with the cost of construction in 2009/10.

Construction work undertaken by the Highways Agency and the Environment Agency is so far predicted to achieve smaller savings, of 1% and 3.8% respectively.

Other departments are expected to follow, with Morrell saying that the communities department and Ministry of Defence will publish their trajectories in the second quarter of this year.

Morrell said the progress showed that Cabinet Office minister Francis Maude was committed to driving through the reforms proposed in the June 2011 Construction Strategy. He said: “I just think we are at one of those great points of change, if government holds its nerve on what is a long term programme.” 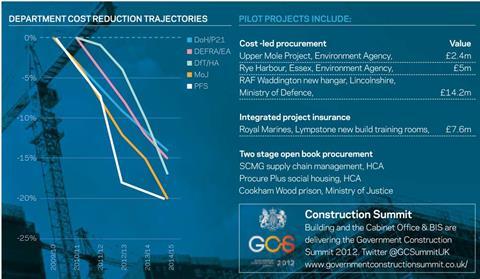