Willmott Dixon is eyeing the chance to take over a £21m upgrade of the Brighton Dome after original fit-out contractor R Durtnell & Sons went under earlier this week.

The Kent-based builder, which traces its roots back to 1591, was appointed to the job nearly two and a half years ago.

In a statement posted on its website on Wednesday, client Brighton and Hove city council said: “Over the coming days we’ll be exploring practical options for continuing and completing these essential restoration works as soon as possible.”

It is the first phase of a three-phase scheme to overhaul Brighton’s Royal Pavilion estate which includes the pavilion itself and the city’s museum and art gallery.

The dome, which was built 200 years ago and is used as a music and entertainment venue, is grade I-listed while the theatre is listed at grade II. Work on the dome involves adding extra seating, creating a new viewing gallery, building new rehearsal space and restoring hidden heritage features.

The firm said it had been faced with cash flow issues during the period, which had required an addition £1.5m being pumped into the business after the year end. 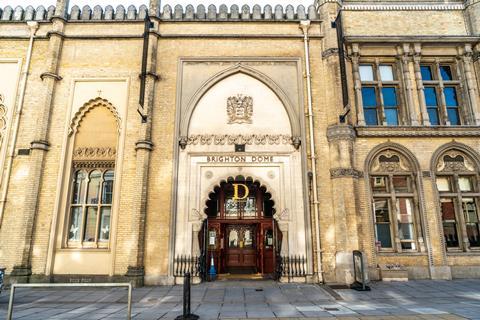