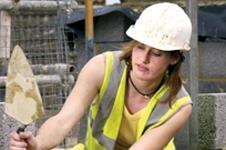 Women in the construction industry have triumphed at an awards ceremony for young professionals.
Despite women making up only 9% of the industry’s workforce, three out of the four winners at the Duke of Gloucester’s Young Achievers Awards held at the RIBA last night at the RIBA (14 March) were female.
The awards had four categories: architecture, engineering, surveying and project management. There were female winners in three of the categories, and the overall winner, an engineer from Kier, was female too.
Winners each receive a unique package of support through the Construction Youth Trust and development opportunities through a one year mentoring programme.

Now in its second year, the scheme particularly recognises young people who have overcome barriers to get to where they are, and judges read applications from young people who had shown “exceptional resilience and determination”.