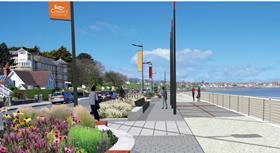 VolkerStevin has begun work to redevelop the existing promenade of Colwyn Bay in north Wales.

The contractor has started on site after winning a contract for phase two of the Colwyn Bay Promenade Enhancement project, which will see 1km of the promenade between Victoria Pier and the eastern section of the Cayley Embankment redeveloped.

It follows on from phase one of the project, which saw the construction of an £8m watersports centre and the creation of a permanent beach as part of the coastal defence works.

VolkerStevin had previously worked on phase one but lost out to Galliford Try on some parts of the scheme, according to construction data company Barbour ABI.

Phase two of the project will involve widening, realigning and raising a section of the existing promenade, upgrading car parks, new landscaping and building a new seaside café and a play area.

The project is expected to be completed by next summer. Mott MacDonald is also working on the scheme as consulting engineer.