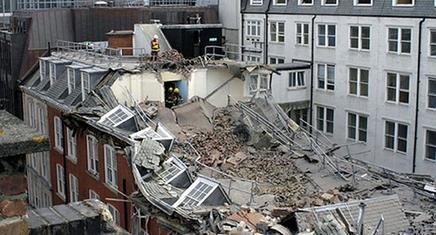 Builder claims £300,000 from property owners after collapsed building trapped him for 10 hours

A builder who lost his leg when a building collapsed in central London has launched a legal battle for £300,000 compensation.

Romanian-born Grigore Vraja, 22, was trapped for 10 hours in the wreckage of a business centre, then occupied by a prominent Labour politician, after the top two floors of the five-storey building collapsed on him in June 2007.

Fifty fire fighters and a crane were involved in the attempt to free Vraja. His leg was later amputated at the hip. Another person was also injured in the incident and taken to hospital.

The collapse, which took place on Dean Farrar Street in London, made national headlines, as the building was at the time home to the office of communities secretary Hazel Blears, who was then running for the role of deputy Labour leader. Neither the minister nor her staff were hurt.

Vraja had been working on illegal renovation works at the time of the incident for a wage of £50 a day. He is now suing property owners Bashir Nathoo and Shirazali Boghuni for more than £300,000.

Solicitor Paul McNeil, who is representing Vraja on behalf of Field Fisher Waterhouse, said neither planning permission nor building control had been approved before work to convert the building into a hotel was carried out. He said: “There were so many mistakes, right from the start.”

According to the solicitor, the defendants have admitted liability and paid an “undisclosed sum” to Vraja, but the builder is now seeking an additional £300,000 in damages. The final amount will be decided in a trial in late 2009.

McNeil added: “Mr Vraja is absolutely devastated at the loss of his leg. He is still a young man – this accident has affected his work and life beyond belief.”

Following the incident, the Health and Safety Executive (HSE) served a prohibition notice, banning Nathoo and Boghuni, who are hotel developers, from carrying out work at any of their 15 hotels. It has since been lifted. An investigation into the incident by the HSE is continuing.