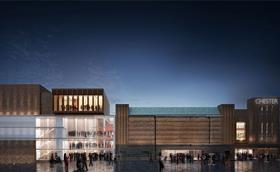 WYG has appointed Anne Clements as planning director in London.

She joins the consultant from Countryside Properties and was previously planning director at Quintain, where she worked on the Wembley Park regeneration scheme.

WYG, which worked on Bennetts Associates’ Chester Storyhouse (pictured), a theatre, cinema and library complex due to be opened by the Queen and Meghan Markle on Thursday, said Clements had “a wealth of experience delivering high density, residential-led, mixed use development projects”.

Paula Carney, WYG’s head of planning for London, said Clement’s track record and experience made her a “valuable addition” to the London planning team.

Further afield, WYG has launched an operation in Amsterdam to ‘mitigate’ any potentially damaging fall-out from Brexit.