Zaha Hadid Architects has won an international competition to design an airport in Mumbai, its first major project on the Indian subcontinent.

The practice was selected after a “challenging and intensive 12-week fast-track design competition among the best international architecture firms”. 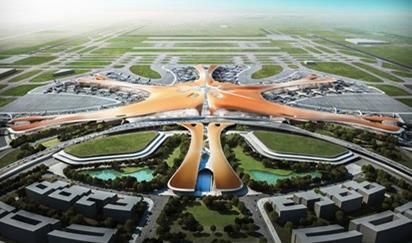 The shortlist was drawn up by GVK, operator of Mumbai’s existing Chhatrapati Shivaji International Airport which is fast approaching capacity. It would not name the other four contenders.

The new Navi Mumbai International Airport will eventually be able to handle more than 60 million passengers a year.

It will be built in phases on 1,160ha in Navi Mumbai, a new town across Mumbai Harbour from the city. A planned Mumbai Trans Harbour Link will connect the airport to the city and rail links to the rest of the country.

ZHA, which is also designing the £9bn Daxing airport in Beijing (pictured), has been appointed to design terminal one and the air traffic control tower as well as landside access. The project is due to be completed by December 2019.