Housing secretary Robert Jenrick has given the green light to two towers designed by Zaha Hadid Architects for a site on the Vauxhall gyratory in south London months after they were called in by Jenrick’s predecessor.

James Brokenshire wanted a second look at the £600m plan at Vauxhall Cross Island last spring amid concerns over the buildings’ height.

But Jenrick has now given the green light to the proposal by developer Great Marlborough Estates which involves building a brace of towers, one of 52 storeys and a second running to 42 storeys.

The pair will be linked by a 10-storey podium with the smaller north tower including close to 260 apartments while the 52-storey south tower features a 618-room hotel. A bus station built in 2005 and designed by Arup will be demolished to make way for the scheme which has had its start date delayed by the coronavirus pandemic.

The towers – one 185m tall and the other 151m – breach Lambeth council’s local plan which restricts heights in the location to 150m despite identifying it as a suitable spot for towers.

Approving the scheme, Jenrick said he took into account inspector John Braithwaite’s view that the quality of the architecture was “undeniable” and the scheme “outstanding” in townscape terms, as well as the number of homes that would be provided and improvements to the public realm.

A letter from his department added: “He agrees with the inspector that, while there is a technical conflict with the height limit, a number of other buildings taller than 150m have been either built or approved in this area, and that taken as a whole the proposal complies with the [local plan].”

KPF’s 56-storey One Nine Elms project, which is being built by Multiplex nearby, will be slightly taller than the Hadid scheme. That scheme had been due to complete this spring.

Hadid’s scheme replaces two previous proposals for roughly the same 0.57ha site by Squire & Partners dating back to 2005 and 2010. The first of these foundered on the affordable housing issue while the second went to public inquiry and was approved by then secretary of state Eric Pickles in 2012. 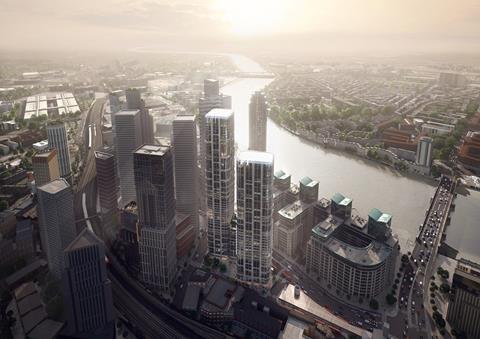 How the towers will look when completed