Plagued by spiralling delays and ballooning costs, the extension to the world’s most popular modern art museum should finally open this summer 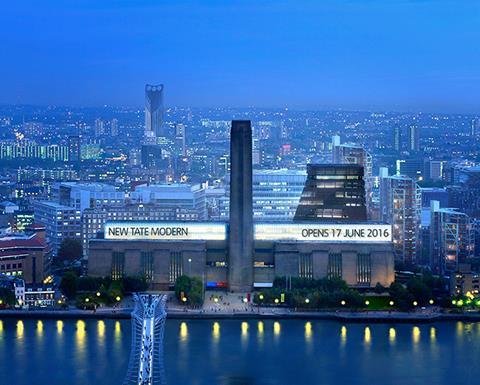 2016 is set to be the year that several long-delayed projects finally complete, and others will hopefully get off the ground. Building’s look at some of the highlights to come in the year ahead continues with the Tate Modern extension.

Should all go to plan, on 17 June this year, the world’s most popular modern art museum will increase in size by 70% when its much delayed extension opens. Like many 2016 openings, the 10-storey ziggurat structure perched behind Giles Gilbert Scott’s iconic former power station has been plagued with spiralling delays and cost overruns. Costs have ballooned by £45m to £260m and the original opening date had been timed to precede the London Olympics in February 2012. Much of the delay has been said to centre on “teething problems” connected with the complexity of its brickwork, an intricate lattice screen of full-size bespoke bricks sitting on a steel corbel frame and laid on multiple inclined angles. When the project completes the Tate will benefit from an additional 20,000m² of gallery space. Brick appears to be a consistent material response to London vernacular style for architects Herzog and de Meuron who, after completing the initial gallery conversion in 2000, are returning to the site of perhaps their defining early commission. Their proposals for the new Chelsea football ground also feature contorted brickwork forms and will also receive a planning decision this year.