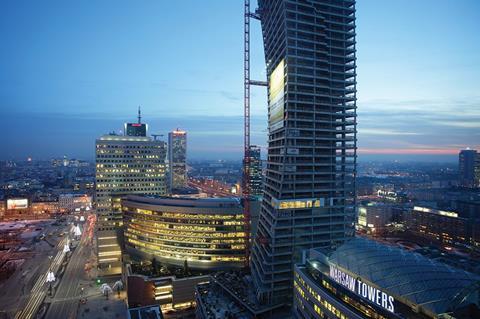 Goodness knows, the last five years have been difficult for the European construction industry. First the financial crisis gave the residential market a good kicking. Then the resulting global economic crisis put its boot into the rest of the private sector. And finally the debt crisis in the eurozone led to huge contraction in public sector construction. To a greater or lesser extent, these problems are still with us.

However, Europe is such a vast economic area - the world’s single biggest market - that such sweeping statements disguise interesting differences. According to data from Euroconstruct, which gathers information and produces forecasts on the construction market in 19 European countries, eastern European construction economies have fared much better since the downturn, relatively speaking, largely off the back of major EU investment in infrastructure.

However, the recent failure to agree an EU budget is, potentially, a significant fly in the ointment. So, what opportunities remain in the East? And what pitfalls await UK construction firms looking to win business in the likes of Poland, Hungary and the Czech Republic? 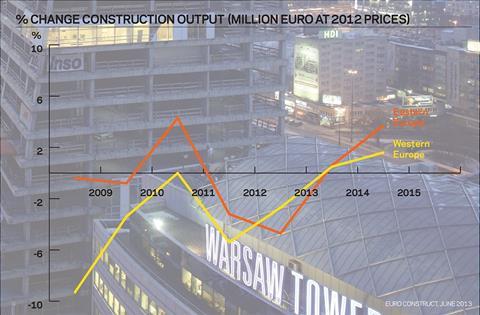 Generally speaking, construction output in the East suffered far less than the West at the outset of the economic troubles in 2009 and 2010, is forecast to suffer greater proportional falls in output this year and is expected to return to significantly higher levels of growth by 2015. In short, the pain has been later to arrive, less keenly felt and for less time in eastern Europe than in the West. For instance, while construction output contracted by 9.3% in western Europe in 2009, in eastern Europe the equivalent figure was just 0.4%. And while output in the West is forecast to increase by 1.6% in 2015, in the East it is predicted to grow by 3.7%.

In part, this is due to the high levels of investment in infrastructure in eastern European countries, the vast majority of which has come from EU funding aimed at bringing transport, energy and utilities infrastructure up to the standard enjoyed by the West. Since their accession to the EU, huge amounts of European money have been allocated to bringing infrastructure in the east up to scratch following decades of under-investment during the communist era.

For instance, Poland alone received €68.7bn (£58.5bn) in EU structural and cohesion funding for the 2007-2013 budget period. And, while construction output in eastern Europe, at €74bn (£63bn) in 2012, is less than a tenth of that in western Europe, this only serves to make this funding more important. Much still needs to be done: despite the billions ploughed into infrastructure projects since Poland joined the EU in 2004, the country’s road density remains just 5% of the UK’s.

The problem is that it is currently unclear exactly how much federal investment will be available from next year as the EU’s budget for 2014-20 has yet to be settled and is at this stage seriously behind schedule. While accepting an overall budget for the period of €960bn (£816bn), MEPs voting in March this year rejected the structure and components of the budget proposed by the European council. It is hoped that a deal will be passed by the European parliament next week, but the result of the vote is far from certain. 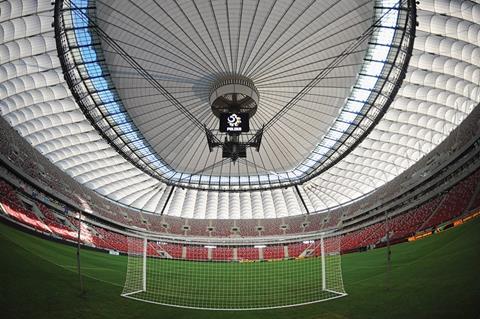 To describe the situation as nail-biting is something of an understatement. To take the Polish example again, in 2011 construction output came in at around £34bn, of which 60% was made up of investment in transport, energy and utilities projects, the vast majority coming from various EU funds. “The EU budget is the most important issue for Poland,” says Magda Skalska-Burgess, market intelligence analyst at consultant EC Harris. “A lot of construction work that has been going on there for some time now is entirely due to European money. It’s very important. A lot of projects either go or don’t go as a result of it.”

However, according to Iain Leyden, country manager for Poland at consultant Turner & Townsend, the Polish government still has funds to distribute allocated to the country from the current EU budget, which should provide something of a buffer. That said, as with most EU funding programmes, the money is time limited and, if it isn’t spent soon, risks being clawed back by Brussels.

“They’re rushing to get it out before time runs out,” he says. “The next tranche of the budget hasn’t been settled yet, but the government still has access to funding that was allocated in the last four or five years. It seems there is a push on the infrastructure and rail work at the moment.”

However, putting the travails of the EU budget to one side, it is clear that in some countries in the East, economic development has continued apace, with the logical knock-on effects for private sector-led construction. For instance, Robert Kaminski, head of architect Broadway Malyan’s Warsaw office, says that retail projects continue to provide the firm with a lot of work. “Retail is still going,” he says. “In the past, retail schemes were mainly concentrated around the big cities, but now they’re moving to smaller places with different formats.”

The office side in particular is still booming - there’s a large uptake every year and development is ongoing, especially in Warsaw

Kaminski adds that commercial property is also still alive and well in Poland. “There are a lot of workplace projects, with office projects in the big cities. Warsaw is the location for headquarters, but there’s work in Gdańsk and Krakow and elsewhere.” Leyden agrees. “There’s still a lot of development work going on in retail, offices and industrial,” he says. “The office side in particular is still booming - there’s a large uptake every year and development is ongoing, especially in Warsaw.”

That said, there are still challenges, with increased competition for contracts due to a reduction in overall workload cited as the most common. “Our income went down significantly and our margins are close to zero,” says Kamil Bado, country manager for the Slovak Republic at consultant Gleeds. “But we’re still keeping our staff and trying to be the number one in the construction management market, which we currently are. There are a lot of local competitors, but they’re a lot smaller than us and the international competition is disappearing because of the tough market.”

Leyden agrees that making a decent margin is difficult in the current climate. “It’s a clients’ market,” he says. “They’re squeezing consultants in terms of fees. It can be quite difficult to gauge where your fee level should be. The Polish market doesn’t have the same sort of regulation for project managers or QSs [that we have in the UK]. It’s more likely that engineers or architects are involved in those types of roles.”

It is also clear that there are significant variations in market performances between countries. While market sentiment in Poland and Hungary, for instance, remains bullish, elsewhere it is clear that conditions are less favourable. At Gleeds in Slovakia, Bado describes a market that, while being far from moribund, remains hard-going.
“We’re doing a lot of big residential projects, as well as retail, but the market is tough,” he says. “There are a lot of plans for future development, but they are on hold because the market is quite pessimistic at the moment - it all depends on the wider European market.”

While they are hardly emerging markets, it is clear that many eastern European countries do offer opportunities in areas that are pretty mature in the UK, but that are only starting to emerge there. 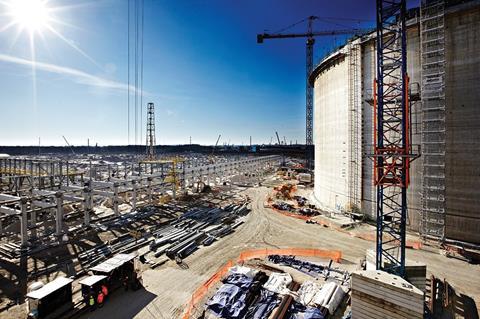 At Broadway Malyan in Poland, Kaminski believes that new sectors are emerging: “Student accommodation is a completely new area in Poland,” he says. And masterplanning is becoming a new topic as well. Clients are increasingly aware of the rise in value of the land if they prepare a masterplan, which wasn’t the case in the past. With a high number of firms adept at masterplanning, this is clearly a growth opportunity for UK architects and consultancies.

Then there is the prospect of increasing private investment in the energy sector.

While discussions are ongoing on issues such as taxation and the cost of concessions, the discovery of major shale gas reserves under Poland has been attracting attention from large international companies. “We’re making inroads into the oil and gas sector for shale gas that’s coming online,” says Leyden. “Most major players in the industry are in Poland at the moment and expect to be here for a lot longer - we’re aligning ourselves with them.”

So, opportunities in the former eastern bloc are mixed. Eastern European countries were to an extent cushioned through the worst of the downturn by the huge amount of previously allocated federal infrastructure investment - a ready-made stimulus package that required no negotiation or additional borrowing - and by 2015, construction output growth is expected to significantly outstrip that of the west.

However, until the vexed issue of the 2014-20 budget is settled, UK firms would do well to think long and hard before investing too heavily in the EU’s eastern reaches.