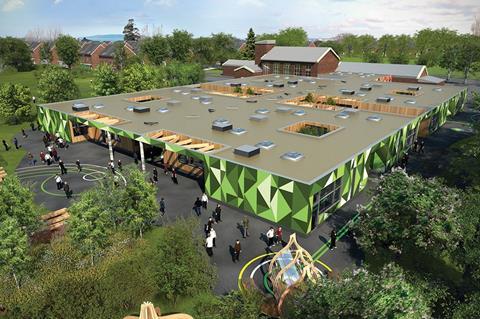 When the Building Schools for the Future programme was scrapped in 2010, many people assumed that that was more or less the end of school building in England. On the contrary, while there is certainly less money floating around the education sector, there is arguably more innovation, if not necessarily in design then certainly in construction and procurement.

Last year, standardised schools took centre stage, prompted by 2011’s James Review, which recommended the adoption of standardised design and specifications in order to lower construction costs and improve efficiency. Perhaps unsurprisingly considering its mass production aspirations, it was contractors rather than architects who led the way, with companies such as Wilmott Dixon, Wates and Laing O’Rourke producing competing standardised school models for the education market.

But now, a year later the worm has turned (a little) and one contractor has devised yet another variation of another conventional school construction method that is equally likely to strike terror into architectural minds: modular construction. Of course modular construction is nothing new but Lime Tree Primary School in Greater Manchester represents a unique application of the concept to a school building.

The £3.8m school is due to complete next month and it charts new waters in two ways. Designed as a joint venture between Laing O’Rourke and Atkins, Lime Tree is the first
to be built from a new modular assembly system devised by Laing O’Rourke plant hire company Select.

Select was initially established as a supply chain partner to build temporary site huts and plant accommodation on Laing O’Rourke construction sites. But as Helen Boardman, Laing O’Rourke project manager, puts it, they soon asked themselves “why we couldn’t build the actual buildings as quickly and efficiently as their temporary ancillary accommodation?” The results at Lime Tree school are clear, an astounding 400m² of floor area was being built per day.

The second reason why Lime Tree is currently unique is the fact that this modular assembly system, essentially a variation on the standardised school model, has been applied to a highly specialised school format that in turn generated a highly customised, bespoke design response. Lime Tree School is a forest school. 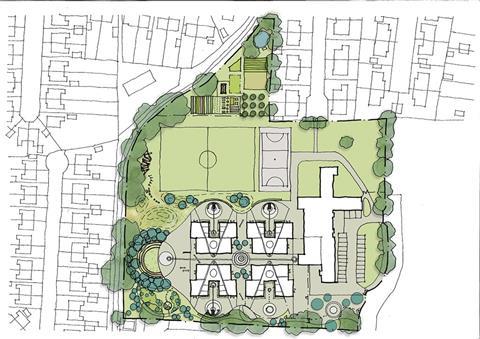 These are state schools that operate the National Curriculum but prioritise outdoor learning and direct engagement with nature and landscape.

It is also a designated National Support School, which means it provides a leadership role supporting other schools and receives visiting educational delegations from as far afield as China.

Despite the modular construction and the common perception that standardisation imposes uniformity, the design concept has been able to respond to the school’s unique role in a very direct and visible way. Moreover, Simon Reid, Atkins project architect, not only maintains that the modular construction process helped “generate the initial concept diagram right from the start of the project” but that it set parameters that “protected the concept and ensured that it has been maintained from the start of the process to the end.”

Lime Tree Primary school is a 420-pupil, two-form entry primary school on large suburban site surrounded on several sides by a copse of mature trees. The existing building is a primarily post-war, single-storey brick construction with minor extensions over the past decade. The new scheme sees most of the post-war building demolished but the hall and some administrative areas retained. These are directly connected to the new accommodation to form one continuous structure.

The building is composed as a series of four linked pavilions arranged on a cruciform plan, dissected by a broad, sheltered “avenue” and a large central courtyard. Three pavilions are identical; the fourth, containing the nursery, is slightly larger. The final component is the “link” building at one end of the avenue, which connects the new complex to the retained portion of the existing school.

Reid describes the design concept behind the school as that of a “journey through a forest”. This begins on the external walls with metal Trespa rainscreen cladding panels arranged in a triangular motif coloured in various shades of green to mimic (abstractly) the veins of a leaf. The panels assume an earthier colour as they get closer to the existing building.

Once within the school compound, the walls of the avenue and central courtyard are clad in vertical strips of cedar panelling to continue the nature theme. This is further emphasised by the fact that both these main circulation areas are covered by a rhythmic pattern of either sheltered, semi-enclosed or fully-open roofing, which provides the natural exposure that reflects the school’s unique syllabus. 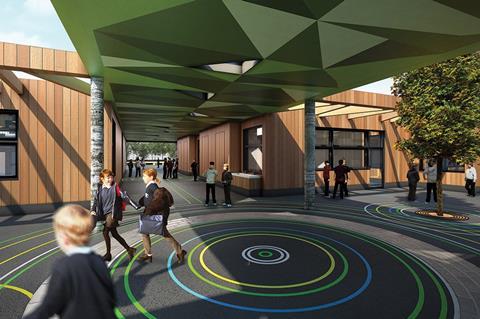 The pavilions are dissected by a central avenue and courtyard

While the central avenue is primarily enclosed, regularly placed skylights admit natural daylight. It is also conceived as a “forest canopy” with the triangular Trespa cladding visible outside applied to its soffit. Semi-enclosed areas are covered by a cedar diagrid trellis that resumes the triangular theme. The final key components are the semi-enclosed internal courtyards at the centre of each pavilion. These can be cultivated as gardens or and provide break-out or outdoor learning space shared by and accessible from the classrooms arranged around it.

Each pavilion contains four classrooms and two toilets and is constructed from 13 prefabricated, flat-roofed, single-storey, steel modular units measuring about 10m x 3m. They each offer an internal ceiling height of 3m. A total of 57 modules have been constructed on the school.

The modules arrive on site as an integrated structural unit containing floor, roof and perimeter base cladding onto which the final fascia - which can range from metal to timber or brick-slips - can be applied. The modules’ frame comprises square, hollow section posts at each corner, which contain welded angles through which bolted screws fix each module to the next.

The floor consists of a steel grillage made up of a 300mm deep perimeter cold form channel with steel box section cross members supporting the insulated timber floor deck.
The module can rest on either pad or piled foundation supports at each corner and at intermediate points along its perimeter.

Once inside the pavilion, the modular assembly is imperceptible. Floor layout within the superstructure frame can be completely flexible, as evidenced by the triangular stud
wall layout applied to the lobby at the centre of each pavilion.

Boardman is unequivocal about the benefits of the system. “Speed, less disruption, lower preliminaries, less time on site and it also forces design decisions to be made early and stuck to.” The 20-week construction programme at Lime Tree would certainly appear to bear out her conclusions: 10-12 modules were constructed per day, which constitutes around 400m² of accommodation. Boardman recalls headteacher Simon Beswick’s surprise when he was informed that his initial plans to have the new school finished by October 2014 could be brought forward by an entire year using the Select system. 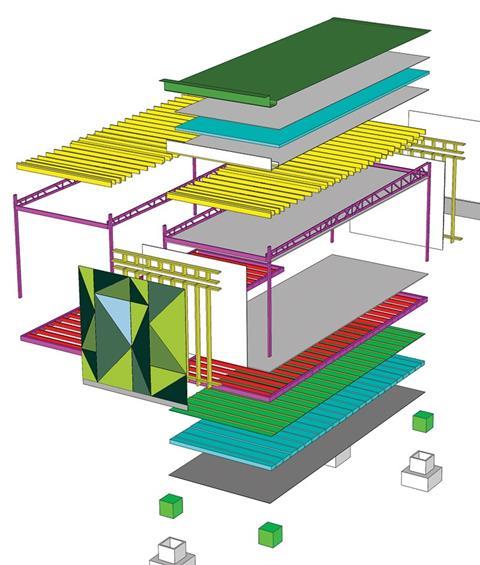 Exploded diagram showing how the Select system fits together

For Reid, it is the realisation of the design concept that stands out. “The design concept has been protected throughout the process because the standardisation of elements has actually kept the construction process in check. Yes, there are constraints imposed by a modular system such as the spans between columns and the fact that the modules have to fit onto the back of a lorry. But there are constraints imposed by frame buildings too. It’s a case of having a compact, simple wardrobe or kit of parts and then following the rules.”

Both admit that Lime Tree has been a learning process and that things might well be done differently on the next job of this kind. “We’d definitely have even more parts of the module prefabricated before it arrives on site” ponders Boardman, “there’s nothing to stop the modules arriving with everything from glazing to architraves already installed.”

And what of the constraints or limitations of the system? “The lightweight construction of the modules could be perceived as a limitation as these don’t include concrete which would add thermal mass,” explains Reid. “Phase change materials or a concrete floor added to the modules on-site could possibly address this. But pouring concrete would erode the benefits of off-site construction.”

For some, the idea of modular construction being applied to schools will be anathema. For them it will always smack of the cheap, monotonous aesthetics associated with the site huts and plant apparatus from which the Select system sprung.

But Lime Tree proves an important point. Cladding or design concept aside, it does show that the principle of bespoke, highly customised design can still be delivered on a standardised, modular product. Moreover, it can also be applied to a school with a unique and very specific educational mandate. This, combined with speed and efficiency of construction and utilisation of a co-ordinated supply chain, could well form a conceptually innovative solution for the post-BSF education sector.