Serpentine Pavilion: A snake in the grass 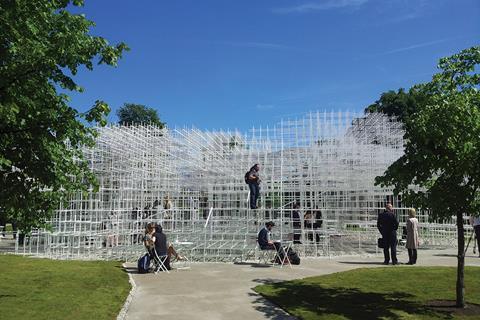 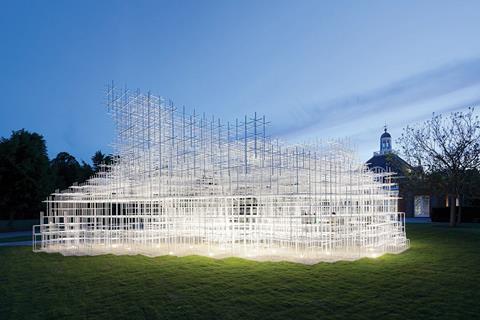 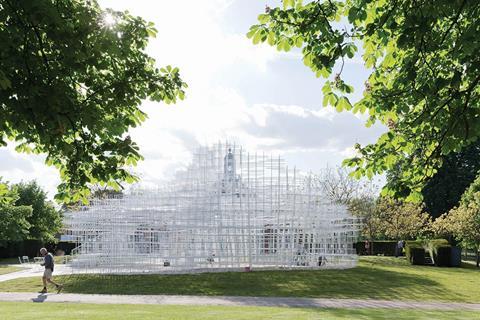 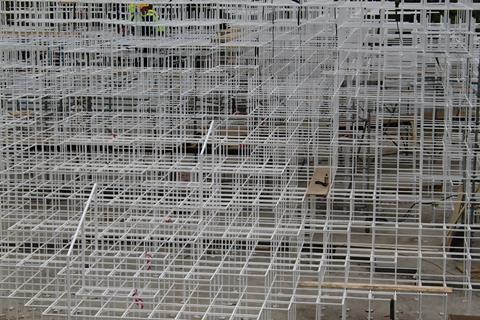 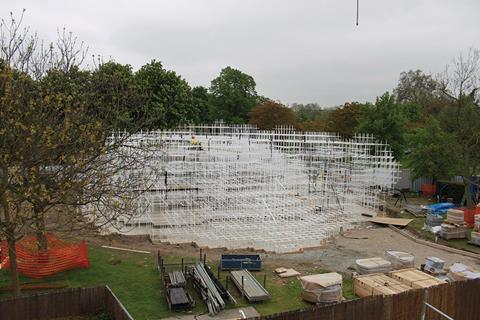 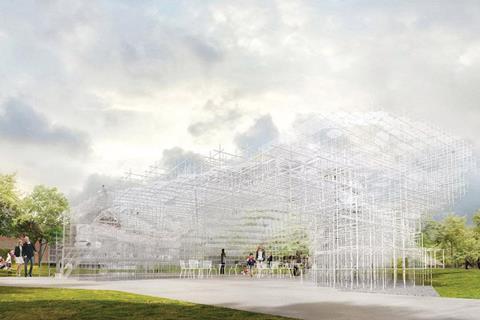 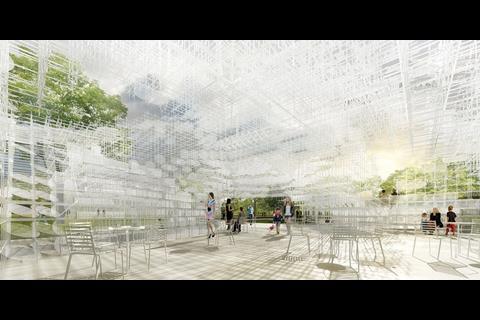 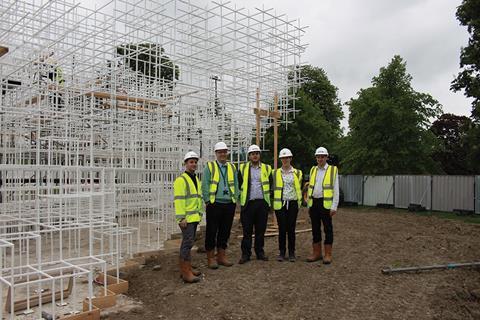 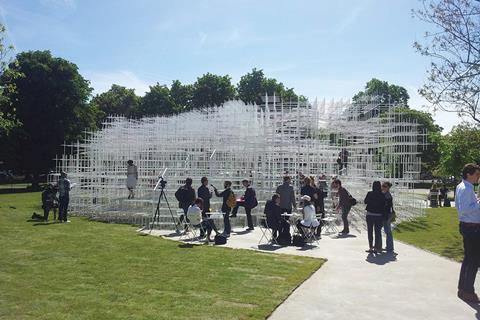 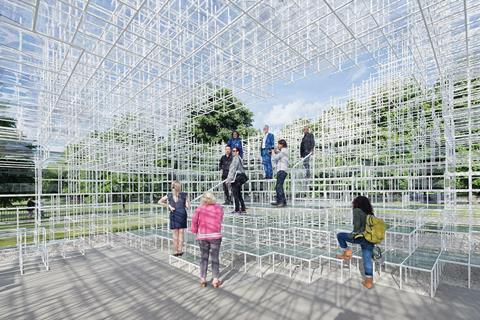 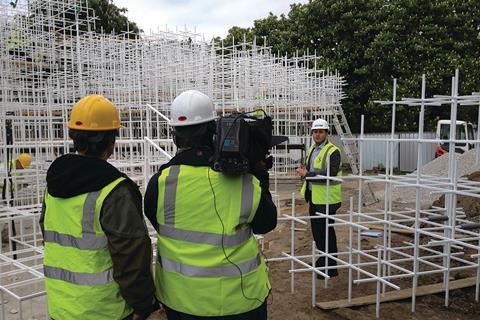 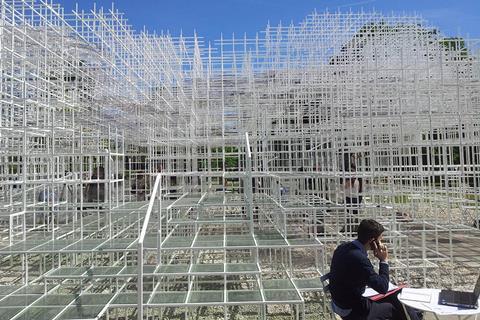 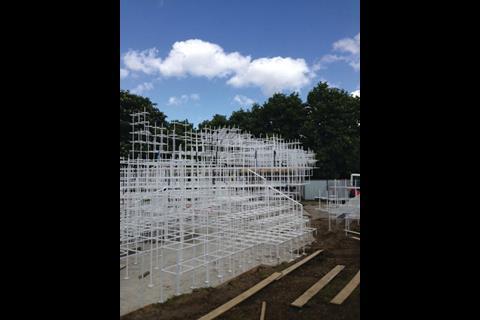 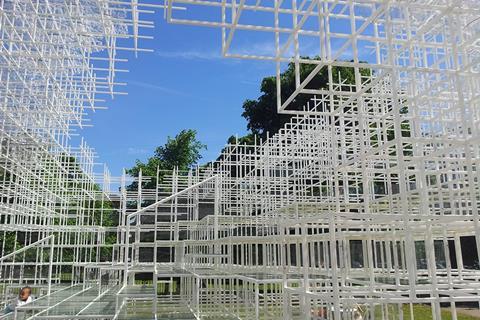 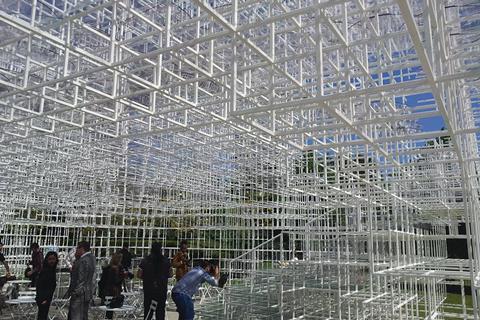 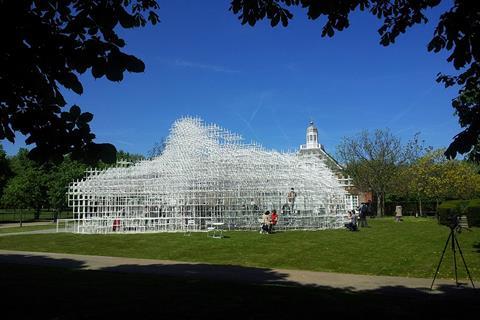 Sou Fujimoto’s Serpentine Pavilion is a geometric structure, but also organic and cloud-like. It’s an impressive deception. So how did the team pull it off?

This year’s Serpentine Pavilion is a structure of interesting contradictions. It is extraordinarily complex, with 38,000 elements connected by 11,000 joints, but somehow manages to look insubstantial and almost dreamlike. These elements are used to generate a rigidly geometric structure, yet the end result is organic in form. This makes it one of the more intriguing examples of this annual architecture-meets-sculpture commission.

It is the work of a rising star, the Japanese architect Sou Fujimoto. Much of Fujimoto’s work is characterised by a geometric, grid like quality and the pavilion is no exception. Fujimoto is fascinated by the apparent contradiction between the formal, ordered nature of a grid and soft, organic forms.

“The main point is not the grid itself which is strong, straight and ordered but the ambiguous soft experience that the grid creates.” 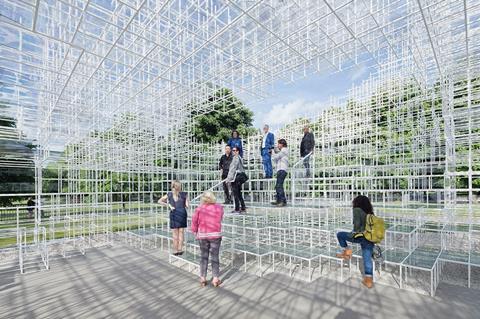 The pavilion is made up from a repetitive, intricate three-dimensional square grid formed from white-painted square section tubes just 20mm thick. This rigidly orthogonal structural solution has been used to create an organic shaped structure similar to the crown of a tree in plan and elevation. Two entrances lead to a stage surrounded by terraced seating formed from frosted glass resting on the structural grid. The sides and top of the structure are covered in transparent, polycarbonate discs which provide weather protection but manage to remain almost invisible.

Fujimoto’s pavilion marks a significant departure for the Serpentine Gallery. This is the first time since the commissions started in 2000 that Arup hasn’t provided the engineering expertise and general technical advice needed to realise each commission. This year the role has been taken on by rival Aecom, with chief executive of building engineering David Glover at the helm. This move is less surprising than it seems as Glover had worked on four earlier pavilions when he was a senior partner at Arup.

“There was a feeling at the Serpentine they wanted a change so they rang me up,” he explains. “We had a good team and it helped that I had worked on previous pavilions.”
Did Aecom encourage Fujimoto to produce a highly complex structure to show off its engineering prowess? Glover says not. “The vision always came from Sou,” he says.

“This wasn’t an Aecom-driven engineering structure.”

I wanted to create something between the architectural structure and the natural surroundings, a point where nature and the structure could meet

One of the biggest challenges has been realising the project within a very tight timescale. The pavilion is due to open on Saturday [8 June], which is three weeks earlier than usual. “This one has been very, very fast,” says Glover.

Work started at Christmas 2012 with three different designs on the table by mid-January. These were quickly whittled down to one concept, which had to be turned into a realisable form. Glover says the only way to design and build the pavilion in five months was to design in parallel with the manufacturing process.

He flew out to Tokyo to spend a weekend with Fujimoto and his team working out how to deliver the pavilion. The original concept had double the number of joints of the final version. “We had to boil this down without losing Sou’s concept,” explains Glover. Fujimoto’s modelling team were churning out balsa wood models as they worked on the concept with drawings being sent back to Ted Featonby, the project manager at delivery contractor Stage One, to see if they could be easily manufactured.

The eight-hour time difference between Japan and the UK turned out to be an advantage. Fujimoto could send 3D models to Glover at the end of their working day, Aecom could work on these, sending the model back to Japan ready for Fujimoto to continue work at the beginning of the next day.

The geometric structure is based around an 800mm 3D grid made from 20mm box tube. Fujimoto wanted a smaller section tube but there wasn’t anything that was capable of being laser-cut in the time available.

The grid is subdivided into 400mm section to accommodate seating and steps. Each node has up to six tubes, which are welded to create a smooth, seamless finish. “The connections had to be strong enough to satisfy building control and be capable of manufacturing and assembling the nodes within 30 minutes,” says Glover. The finished grid is painted white using a two-part epoxy paint.

Weather protection is provided by 11,000 polycarbonate discs - 800mm in diameter, these overlap like roof tiles and are angled slightly to create sufficient fall to drain water off the roof. Discs also line the sides of the structure for wind protection. “If it really buckets down these will give the same degree of protection as an umbrella,” says Glover. 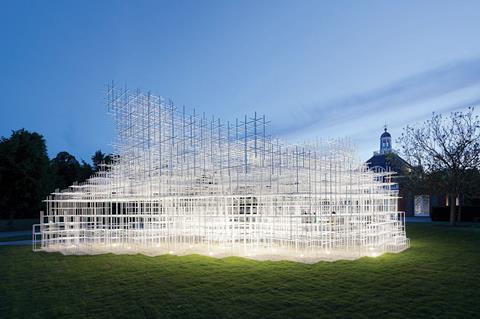 Finding a way of fixing the discs to the structure proved challenging. The clamp needed to be cheap and unobtrusive, and to allow the discs to tilt, as well as being quick to assemble on site by hand. The polycarbonate discs come as two semicircles with a notch cut out to enable them to be fixed to the tube. These are sandwiched between two much smaller semi circular discs which join the two polycarbonate elements together. The bottom small disc doubles up as an angled bracket which can be clamped to the tube. These connecting discs were initially quite large and needed to be reduced in size, a task achieved in the factory using laser-cut metal discs as prototypes. “They were literally manufacturing prototypes as we were standing there,” says Glover. 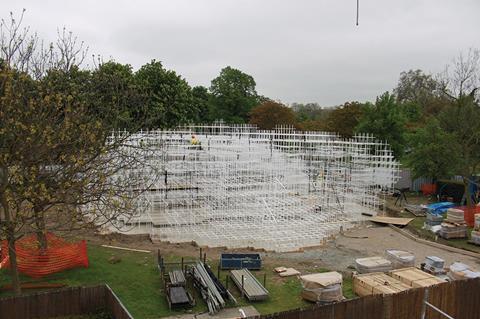 The pavilion is built on a concrete raft foundation. Gravel is placed under the structure and a coloured screed is used for pedestrian pathways through the structure. The structure was prefabricated in sections and brought to site on 17 lorries. These were joined together with larger steel tube sections that could be slipped over the tube and welded to it to create a joint that could be easily disassembled at the end of the summer. The polycarbonate discs were fixed over the structure and attached to the PVC backing disc with two bolts and fixed to the structure. Each disc is joined to its neighbours at the edge with a bolt to stop them flapping around in the wind.

The finished structure will be used to host lectures, meals and receptions including the usual round of industry drinks events. According to Glover, people will need to visit the pavilion to fully appreciate the transparent, delicate nature of the structure. It would be well worth the trip, as this is one of the more interesting Serpentine pavilions since the commission started. 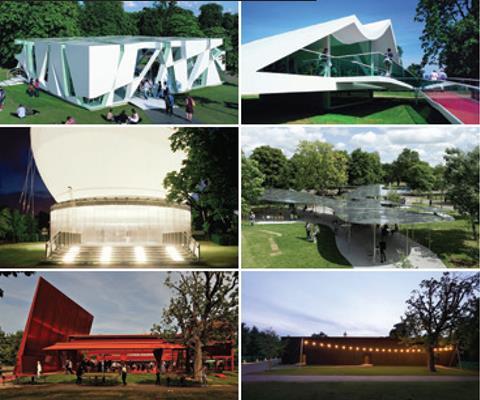