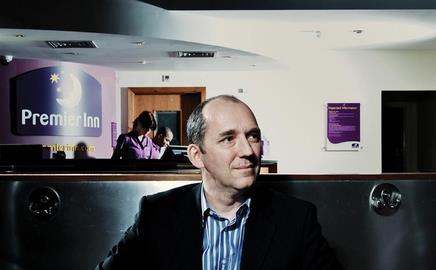 Alex Flach, the man in charge of building the Premier Inn budget hotels, says he wants to build, build, build – which should give some of you looking for work a good night’s sleep. Especially if you like purple

They lurk behind petrol stations and Little Chefs on motorways. They loom over roundabouts on city outskirts. There is always one poking out from behind a clump of trees near airports. With their

block-coloured facades and luminous signage, Premier Inns are hard to miss. Now they are going to become even harder to, as the chain’s owner, Whitbread, is planning a major expansion over the next five years.

This rapid growth won’t really get under way until 2011, as the hotel chain has cut its capital spending in half this year to conserve resources. Even so, it will deliver 2,000 rooms in the UK in 2009 and the same again in 2010.

And its not the only budget chain that is expanding. Its rival Travelodge announced a £77m expansion plan in March, which will involve building 12 new hotels before 2012.

“This market aims to deliver 70,000 rooms within five years,” says Alex Flach, Whitbread’s construction and maintenance director. “We see growth, our competitors see growth and even though there is a recession on, we’re not stopping.”

In tough times, more and more people are looking to stay at cheaper accommodation, it seems, which means this sector could continue to boom through the tough times.

Flach is sitting in one of the conference rooms in the company’s King’s Cross hotel. The walls, the chairs and even the stationery are purple. The monochrome theme is broken only by his maroon and white Costa coffee cup – the cafe chain is part of the Whitbread empire, along with Beefeater, Table Table and Brewers Fayre. The hotel business, however, accounts for 80% of turnover and, hence, a lot of Flach’s attention. Its construction programme, he says, is going strong. “We’re continuing to build, and we have a team looking for more land and opportunities to build,” he says. “You just wouldn’t do that if you didn’t have faith in the market.”

Whitbread has been using the downturn to snap up as much land as possible in preparation for an aggressive build programme when the market stabilises. “We have been really focused on landbanking,” Flach says. “The housing guys aren’t buying, the office guys aren’t buying so it’s a great time for budget hotels to snap up land.

“Our landbank stands at 3,000 rooms that we could turn on at any time. It’s just sitting there with planning approval and we have a whole pile more that will have approval in the next few years. There is a huge swath of construction work in the pipeline – we’re just waiting for the right market conditions.”

There will be opportunities to win work from the end of this year, and Flach needs a team of contractors, QSs, project managers and maintenance experts – not just here but in emerging markets such as India, where Whitbread is exploring opportunities.

The firm works with several contractors, architects and project managers, but is constantly reviewing its supply chain. And since the company has started to offer more turnkey projects – that is, those that are run entirely by the developer – there are also opportunities to win work through the developers themselves (see list, below).

Whitbread uses a range of contracts, including design and build, JCT and partnering. Firms wanting to win work with the group will need the right track record. “Experience in building student accommodation, apartments, prisons – that sort of multi-cellular construction where you are basically building a load of boxes, fitting them out and doing it all quickly and to a tight budget is what we are after,” Flach says.

He adds that it takes a certain type of firm to deliver what he wants. “We’re a demanding client,” he says. “Premier Inn is not for people who don’t like fast pace and rapid change.”

There is also, says Flach, a chance for refurbishment specialists to get involved. Premier Inn aims to refurbish each of its 40,000 rooms every three years – it even refits each shower curtain. “Customers complained that the straight curtains stuck to them,” he explains. “So we changed them to curved ones and had them all refitted. It cost pennies per curtain but even those figures had to be signed off by our chief executive. We’re a budget chain – costs are important!”

There is work for sustainability experts, too. A new hotel in Tamworth, which emits 80% less carbon than its other hotels, opened this year. The most successful energy-saving measures will be rolled out across the whole chain. “It will include greywater recovery – that is taking shower water, filtering it and using it to flush toilets – putting more insulation into timber frames and switching to LED lighting.”

The interview is capped off with a quick tour of the, well, showroom, according to the label emblazoned across the key. The room looks functional, comfortable and, above all, very purple. So does Flach himself stay at his Premier Inns when travelling? “Of course I do,” he says. “I really do think it’s a great family room for £50. Mind you, with the noise they make, I would rather my children were in a different room. Preferably even in a different hotel.” Well, at those prices, it could probably be arranged …