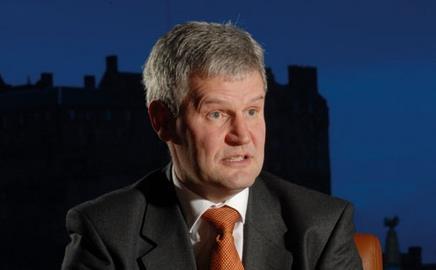 As head of joint ventures at HBOS, Bruce Anderson has been busy building up stakes in housebuilders, and now has his sights set on Crest Nicholson. But if he’s right that in a few years’ time there’ll be only three housebuilders left, he may have the chance to spend more time on the golf course.

Housebuilding is in such a state of flux that experts have taken to trying to predict the next company up for sale and the ones that will disappear altogether.

Bruce Anderson is one of the reasons for this guessing game. He is head of joint ventures in Halifax Bank of Scotland’s corporate division, which has built up stakes in eight housebuilders. At present, he is leading the team that is poised to take over Crest Nicholson for £713m. The consortium includes Sir Tom Hunter, who’s often cited as Scotland’s richest man.

Anderson’s phone is the first to ring when a housebuilder is put on the market. He is also one of the last people housebuilders want to hear from if they are not keen to sell. Anderson’s prognosis of the sector will make nervous reading for chief executives who want to retain their independence. “In a few years’ time there will be just three major housebuilders,” he says confidently.

Which ones? Anderson chuckles. “You know I’m not going to tell you that.” But whichever firms are left, Anderson is likely to have a stake in at least one of them. He shows all the signs of a seasoned deal-maker. After turning up late for this meeting with Building he apologises, dispenses with the small talk and says: “So, are we ready?” So many deals, so little time ...

To be fair, he is a busy man. Since 1998 when Anderson set up the joint ventures division, HBOS has acquired stakes in Countryside Properties, Fairview, Octagon Developments, Ashwell Homes, Banner Homes and Cala Group. “We got into property when nobody was interested but we liked it because it was backed by assets,” he says.

He has two projects presently under way in housebuilding, and Crest Nicholson is likely to be third. With all these stakes, it is not surprising that he speaks highly of housebuilding investments: “It’s an exciting time to be in the sector. Profits have been incredible and there are lots of opportunities.”

One of those opportunities was Wilson Bowden. It was a prey that unusually they failed to capture – Barratt’s £2.2bn offer was accepted by the board on Monday. It is believed that HBOS’ bidding partner, Hunter’s West Coast Capital, was worried it might end up paying over the odds.

Hunter is HBOS’ regular partner. Under the name of Castle Bidco, they teamed up to buy retirement homes specialist McCarthy & Stone in the sector’s biggest deal of 2006, and they are now, after two years of stalking, taking aim at Crest Nicholson. The housebuilder’s board has recommended the offer and the buyers are presently going through the due diligence process.

The relationship with Hunter is important to HBOS’ expansion plans. HBOS likes to share the risk – the parties tend to bid 50:50. And it has a cap on its investments, which is less of a problem for Hunter, who’s personal wealth is about £800m.

Anderson’s second deal, after Crest, is the sale of its 35% stake in Linden Homes. HBOS has been involved with the company for nearly six years and has been trying to sell it since September. Galliford Try announced this week that it was in talks with Linden. “It has taken longer than expected but it should come to a conclusion soon,” says Anderson.

A frequent criticism of private equity firms like HBOS is that they take a short-term view of acquisitions. But Anderson launches a robust defence of HBOS’ strategy, pointing out that Linden’s turnover has grown by more than 30% since HBOS bought its stake in the company: “Linden’s been a fantastic success story.”

He adds that HBOS cares about the long-term security of housebuilders, and accordingly looking for those with strong landbanks. Not that that seemed to apply to McCarthy & Stone – Anderson’s final deal is the prospective sale of HBOS’ 58% stake five months after it bought it, the better to pursue Crest Nicholson.

Anderson adds that HBOS also cares about the housebuilders’ management: “We give management an upside. What we look for is good management as we will not be involved in the day-to-day running of the business.”

That’s not to say that once HBOS buys its stake, it leaves the company to run itself. Rather, it takes 20-50% of the business, with the board retaining a share and the parties sharing the benefits.

But not all housebuilders want HBOS’ help – it is still perceived as a predator and Anderson admits that not all approaches are successful. He shrugs his shoulders: “We do enough deals in the sector.”

Throughout the interview, Anderson remains unfazed, even when pushed on the financial details of the business. But when he is asked about his love for golf, he gets a bit edgy. “Who have you been talking to?” he asks. Maybe golf is seen as passé? “Property guys don’t play golf anymore; everybody goes shooting these days,” he laments. But the next moment he’s rattling away about his passion and talking proudly of winning the 2005 RICS golf day, when he teamed up with Jason Dalby, the managing director of Rosemound Developments. Then, as if realising he is let his guard down, he

shoots me a look and says: “Not too much on the golf, okay?” Clearly, a man of Anderson’s abilities doesn’t like to think in terms of handicaps.

For more on HBOS and Crest Nicholson go to www.building.co.uk/archive