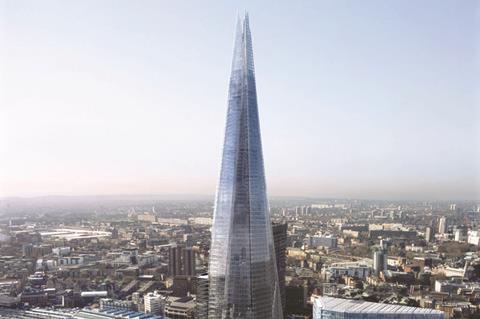 This is the Shard, London’s tallest building and already a bold new feature on the capital city’s skyline. The scheme is to be completed this year. Designed by Renzo Piano, this is a mixed-use 310 m (1,016 ft) vertical city of offices, restaurants, the five-star Shangri-La hotel, exclusive residential apartments and the capital’s highest viewing gallery offering 360° views.

As a London resident I have watched the Shard appear almost over night: the newest London icon to be conjured up. A year ago or so, it dawned on locals’ minds that this potential icon would change the international face of London. People started taking heated sides - loving or loathing the idea of the Shard. At the moment the skyscraper on every tourist board poster representing London’s identity is the Gherkin. But now the Shard (an equally catchy nickname) is about to be the next skyscraper in line, ready to challenge the sensitive subject of the city’s identity.

Its soaring elegant glass façade, streamlined, glinting in the sun (however little) does indeed capture the imagination. Is the building saying to the wistful onlooker: ‘The sky’s the limit in this city’? Or: ‘The limit is the sky, if you don’t have the funds, that is’? In such a tight economic climate it could easily go either way: an inspiration or a condemnation?

A few weeks ago I was lucky enough to be invited up to the sixteenth floor. The complex mixed-use program was explained: a truly a vertical city. Indeed an admirable ambition. And what is more it manages to straddle the vast transport interchange of London Bridge station. A nod has to go out to planners that were responsible for this piece of urban design. Nice touches from Renzo Piano, like his trademark winter gardens, which make it internally architecturally appealing. It’s too early to say whether it will succeed in its ambitious programmatic goals. But my question is, is it London or Dubai?

London has a seriously good story of architecture, producing some groundbreaking designs, and from the look of it, the Shard is the next chapter. This building brings something new to London with its bold design concept pushing the architecture forward throughout London.

This building is just so big in terms of physical presence and the idea behind the building; it really has marked the future of London, while it does not look too out of context at the moment the prospects it brings to London far out ways any other argument.

The design had to take into consideration that it is unrivalled in height in the UK. The slender form responds to this, creating a sleek design that contrasts heavily with the box-like structures in the Canada Square complex. With a variety of elongated triangular forms the design responds to multiple viewing angles. Each façade is faced in glass, split only by ‘fractures’ that define the shape of the fluid structure.

The design is a visual statement, aesthetically beautiful, an engineering triumph, a positive rejuvenation, but a cultural risk? The simple fact is the Shard is imposing. But then, how many landmark structures merely camouflage themselves in their surroundings? Reshaping the London skyline is the easy part, winning the hearts and minds of locals and tourists is a more challenging test.

Ben Williams is studying architecture at the Royal College of Art, Andrew Stout and James Fairweather are at Nottingham Trent University.