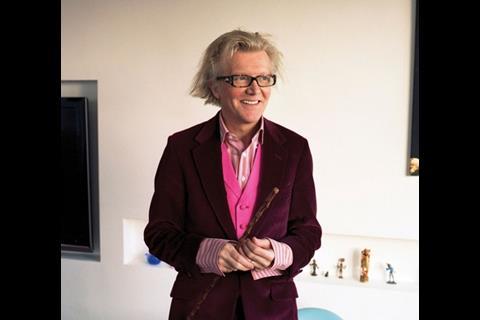 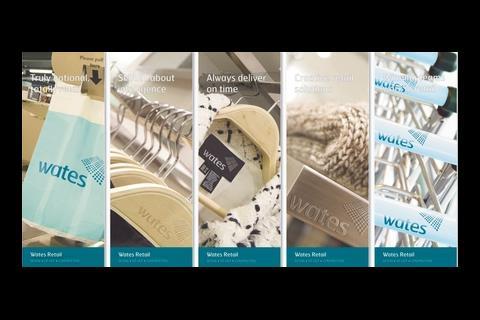 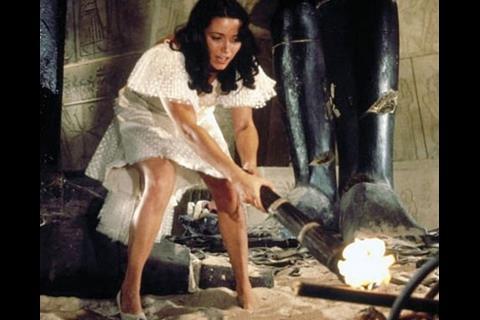 He’s worked with George Lucas, Cartier and Dior, but is a corporate rebrand from Steve Edge really what construction companies need to survive the recession? Well, Wates, Kier and Skanska seem to think so

At first, the east London warehouse apartment looks deserted. There is evidence of human life: a plateful of old crusts on the kitchen table, a saxophone lying abandoned on the floor next to an open jar of Nutella and a giant hobby horse standing in the corner of the room. But other than these and a few other oddities, the space is empty. That is until a shock of blond hair pops out from behind a wall: “Hello,” says design consultant Steve Edge, his eyes bright and eager through his black-rimmed glasses. He emerges – dressed in a hot pink three-piece suit accessorised with a cane – and trots across the floorboards for a double air kiss. “We should have some tea,” he says. “Kettle’s in the kitchen. Somewhere.”

If ever there was a typical designer’s home, this is it. And Edge is perfectly in keeping with its haphazard and downright bizarre ambience. The 49-year-old lives in blissfully happy disarray in the heart of Shoreditch with his wife, five children and pet rat, Rambo. Today, he flits in and out of the kitchen, answering his phone, trying to have two conversations at once and directing the tea-making operation. Keeping a track of his movements becomes a dizzying task.

Given all this artful chaos, you would be forgiven for thinking that this is not the ideal person to be trusting with your marketing budget – working with a design consultant can cost up to six-figure sums. But industry giants such as Kier, Skanska, Gleeds, Wates and ISG may know better. They have picked Edge as the only man for the job when it comes to rebranding and coming up with innovative ways to present tender documents. The question is, is a revamped corporate brand a vital tool for the tough times ahead – as Edge would have you believe – or is splashing out lots of money on an eccentric design consultant in such testing times just a little bit extravagant?

The making of Edge

Born in London’s East End, Edge suffered from dyslexia as a child. When he was just four, having spent several months making papier-maché giraffes at the back of the class, he was taken out of the education system to be taught at home. At 13, he got a part-time job at IPC Media, helping with the lick-and-stick layout process on the magazines, and it was here he found his talent. “As long as I had a bag of glitter, some magic markers and a pair of scissors I was happy,” he says. “Now I still get to use all of those things but I get paid. I am creative and the way I present myself reflects that. Some people look at me and think, ‘What is that? Is he gay? Is he weird? Is he mad?’ But once they get to know me they soon realise I know what I am talking about.”

And there’s a fairly glittering list of clients that agree with him on that – including Marks & Spencer, Dior, Cartier, Fortnum & Mason, the Annabel’s Group and some grand names from the construction industry. Working with contractors seems to have presented Edge with a slightly different set of challenges – he says that, before he came along, Wates Retail’s promotional literature tended towards the “hairy-arsed builder” approach.

Edge has since done a variety of projects with Wates (see box, overleaf), and David Stanley, the company’s business development director, has clearly been impressed: “Working with Steve is mad, inspiring, fun and exciting. But his creative talents are well balanced with a strong commercial sense. Never judge a book by the cover!”

Edge is now working with Kier, Skanska and Gleeds – which will reveal its Steve Edge-enhanced branding next month. Senior partner Richard Steer sings Edge’s praises: “All avenues lead to him for this kind of work. He is professional and gives the company look a bit of glamour.”

Some are sceptical that a corporate rebrand should be a priority, given the economic climate. “It’s a question of priorities, but any company that is having to make people redundant at the moment would have to think very carefully about spending money on updating its corporate image,” says Graham Watts, chief executive of the Construction Industry Council. “I know which I would invest in.”

But Edge has a comeback: “The worst thing you can do now is sit on your hands,” he says. “Competition becomes greater, there are fewer projects and more companies vying for them so you need to be stronger. I understand that companies are under pressure, especially in construction, and that your budget is your budget. But if you don’t think about the obvious avenues and spend your money on something different it could be very, very effective.”

His words reek of self-promotion. But then, these are tough times for everyone and he is after work as much as the next person. And nobody can deny that, as work gets sparser, securing projects and filling up order books will become harder, which is where Edge boasts he can help – he reckons that as a result of his work, the sales of a company called Lock (it used to supply Lord Nelson with hats, apparently) soared 70%, and ISG won a £50m project to fit out KPMG’s headquarters in May last year.

His secret, he says, is developing brands that are open to interpretation. “Information is fine,” he says. “But people forget it. They will remember something if they have to think about it, develop it in their own minds and put their own twist on it. That’s why I don’t overload brands.”

Edge realises he has let his fun persona slip and so quickly flashes a wide grin. But his tough side has snuck out, and thank goodness. He may try hard to keep it hidden but it provides important evidence of a business brain whirring away under all the laughs, zany outfits and flouncing. And any clients considering ploughing any of their precious budget into working with him will need to know there is more to this man than a bag of glitter, some magic markers and a pair of plastic scissors.

Steve Edge started working with Wates Retail 18 months ago. Since then he has designed retail research reports, the banners used on sites and offices, as well as projects to do with site presentation and handover documents.

“Wates Retail said they needed help with visual communication. I asked to see what they were sending out in their brochures – it was all the same hairy-arsed builders in fluorescent jackets digging holes in the mud.

“So we went away and thought about what the company was trying to say and came up with the idea of putting the logo in a retail environment – like on clothes labels and shopping trolley handles. It got the message across instantly and had never been done before. So it was memorable.”

Indiana Jones and the legend of steve edge’s legs

When Indiana Jones and the Raiders of the Lost Ark was being filmed in the early eighties, Edge was there helping George Lucas with the set design. And that’s not all. Both his pet monkey and his legs had roles in the film …

“My monkey, Snuff was in the movie. He was a star. There is also a famous bit when Indiana and his love interest, Marion, played by Karen Allen, are thrown into a snake pit in the middle of the desert. They have flaming torches to wave around and keep the snakes away, which slowly go out.

Karen was not prepared to get into that pit as there were real snakes in there and neither was her stunt double. So I ended up shaving my legs, putting on the white frock and climbing in instead. So when you see the clip of just legs, they are mine and Harrison’s.”

Original print headline: Just the man for an identity crisis