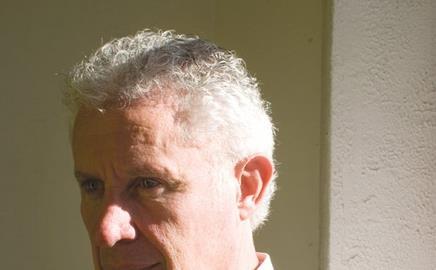 How did you get to this stage in your career?

This is only my second job. I could always draw and had my sights set on becoming an architect from my early teens, but I was a lousy A-level student and didn’t make the required grades, so I never qualified and pursued a career as an interior designer.

After college, I went to work for a museum design practice in Richmond, west London, called Robin Wade Design Associates. I joined ttsp six years later in 1982 and have been here ever since.

What does your job involve?

My day-to-day work should be working on the business, not in the business, so I maintain relationships with key clients or get involved in winning new business. But our comfort zone as designers and architects is to fall back on the nitty gritty of projects, so often I can’t spend as much time on that as I’d like.

It’s my fifth year as managing director, and I’ve been back to school a bit and learnt a better appreciation for the small signs that suggest whether we’re doing well or not. People at the firm need to feel they haven’t got someone like me on their case all the time. My role is to be a positive influence and encourage people to be in front of clients, but know that I’m there as a safety net – someone who can reassure and support them.

Tell us something about ttsp.

The practice was formed by Tom Saunders in 1961, but what differentiates us from several of our competitors is that we’ve had a succession of leaders from outside our founder’s family. There are no Saunders in the firm – there haven’t been since 1983.

The key to success in any business is that you shouldn’t be afraid of appointing people who are better than you are. I like working with people who surprise me and stimulate me. I can look at certain people here and say they’re a lot stronger than I was at their age.

What are the main trends in interiors at the moment?

Unfortunately, both occupiers and developers are feeling the pinch. There’s a lot of talk about different organisations moving from one office to another, but nothing has come to fruition. Everyone’s hoping there’s going to be an increase in the volume of work over the next two or three years. I can’t see it happening, and if there is any increase it’s going to be slow. We’re in pretty good shape, but I have no doubt we’ll find next year tough.

You've been with the company through at least one downturn. Are you seeing any similarities this time round?

Part of my role is networking and I talk to a lot of people every day about where we are. Someone I’ve known for years just told me today’s tough market is hardening all the time. I suspect contracting prices are going to become very difficult to judge, but it’s going to be a fantastic time for clients to purchase their construction projects, although they’d better be careful about what they’re getting for their money.

Contractors won’t just do a lot of work for nothing, so they will really be under pressure to deliver projects in as cost-effective a way as possible. Projects are bound to go in on lower margins.

I like the Eric Parry building on the corner of Wood Street and London Wall. It’s beautifully put together

How can firms prepare themselves for the hard times?

The role of the heads of businesses is incredibly important because they need to keep people as positive as possible to hold things together. One of the key things to do in a recessive market is to work harder on PR. If you weren’t diligent about it before, then you need to smarten up your act.

Which of the projects that you’ve worked on are you particularly proud of?

Recently, we completed a large refurbishment at Adelaide House on London Bridge for legal practice Berwin Leighton Paisner. It was a hugely challenging two-year project that involved creating new space and refurbishing a 1926-listed building, while there were about 500 lawyers continuing to work in the building.

It was a very high value, complex construction and the client wanted some significant and unique interior spaces for their clients and visitors, which I think we did wonderfully well.

What about the low points of your career?

My career disappointments have all been about not winning a job I’ve been chasing. I still get a huge buzz from the chase for new business.

Having repeat business customers is fantastic too. There’s comfort in knowing they value your work. But winning new work from people you’ve not dealt with before requires a different set of skills and is a damn sight harder, but ultimately very rewarding.

Which buildings inspire you?

There’s a beautiful little art nouveau church in Brentwood, Essex, where I live, which I’m fond of. Of the newer architecture in London, I really like the Eric Parry building on the corner of Wood Street and London Wall. I think that’s beautifully put together, particularly the public spaces and the entrance.

I think London should have significant and changing architecture. The City of London is at the forefront of commerce globally, and it should change and have great dramatic buildings – preferably designed by a variety of architects, though not by the same ones.

What do you enjoy doing when you’re not working?

I love playing my guitars, and I go to see a lot of live music in London – the smaller the venue the better. I like the 100 Club on Oxford Street – it’s really gritty and has real character. But I spoiled myself recently and went to see Bruce Springsteen on both nights at the Emirates stadium.

Although I don’t draw very often, when I knuckle down to it I get a great amount of satisfaction out of that, and I enjoy golf too.