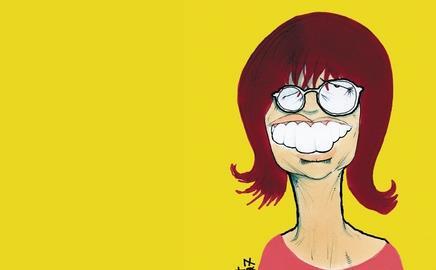 Janet Street-Porter is renowned for having an opinion on absolutely everything and it seems the construction industry is no exception.

Prince Charles ought to watch his back – Janet Street-Porter is on the warpath and she’s not taking prisoners. The problem, it seems, is that they have directly opposing views on the built environment.

“He is the single most detrimental person when it comes to getting the built environment looking exciting and appropriate,” she huffs, pushing her sunglasses on top of her auburn hair.

She slams her orange juice on the table: “It can’t be right to build a fake fucking village that looks like Disneyland.”

Street-Porter, journalist, broadcaster star of I’m a Celebrity Get Me Out of Here! and general woman-about-town, is a person the UK loves to hate. A tainted national treasure.

But whether or not you agree with her views on Prince Charles, this is the side of Street-Porter the construction and architectural communities should be glad exists. She is a passionate advocate of the built environment and especially good design. As a founding patron of Architecture Week, which starts today, and through her columns in the Independent, she has raised the profile of the construction industry, albeit not always in a positive way. Many argue she is the lone female voice in the mainstream media to do so.

Street-Porter can be just as scary in real life as on the TV or in print. Despite being late and mistaking me for the waitress, she is, on the whole, friendly, polite and composed. That is, until she starts on her pet hates, such as Prince Charles or David Adjaye (more on him later). Her distinctive voice rises a pitch and I’m sure I notice a couple of fellow diners duck under their tables to take cover.

Not only does Street-Porter loathe Charles’ Poundbury project in Dorset, but she hates the fact that he waded in on a planning dispute in Clerkenwell, where she has lived for the past few decades. In 2004, Charles tried to halt the demolition of the historic Smithfield’s meat market buildings to make way for an office development.

“Now I’m not keen on another slab of office on Farringdon Road,” she insists, “but Charles has got nothing to do with the area – as far as I know he’s never even fucking visited it.”

Street-Porter, star of the TV show The F-Word, is known for cursing like a trooper. But this is only the second time that she swears during the entire interview. Clearly, the prince brings it out of her.

Born to a working-class family in Fulham, west London, the then Janet Bull despised her parents and her poor surroundings. From an early age, she would lock herself in her bedroom, obsessively collect images of buildings and create collages out of them.

She says she chose to study architecture because nobody from her school had ever studied it before. The fact that not many women studied it was a bonus. When she rocked up at the Architecture Association in 1965, there were 95 men and just five women in her year. Street-Porter, who would go on to have four husbands and several more notches on the bedpost, was delighted.

“I remember going into the Architectural Association the first day and thinking, oh, thank God!” she recalls. She pauses and grins: “It’s like getting off the bus at the right stop, and there are a lot of people like you. I was just so relieved.”

Street-Porter spent two years at the AA, where she met and married her first husband, Tim Street-Porter. She had cooked up a plan to spend her third year in New York, but had to take a year out to apply for bursaries. While she was waiting, she took a detour on to Fleet Steet.

“I did intend to go back but, at the end of that year, I was on the Daily Mail as deputy fashion editor and after three months they offered me a newspaper column. I was only 21 so I thought, there’s no point.”

It was at the AA that she met Piers Gough, the founder of CZWG Architects. The two sat next to each other in class on the first day and have remained close friends. Some 20 years later, Gough designed a highly acclaimed house for her in Clerkenwell.

“Janet couldn’t help but get all the attention,” he recalls. “She was a phenomenon – extremely exciting and hip. All the boys were totally in awe of her.”

Street-Porter insists she doesn’t hang out with the design crowd in Clerkenwell, but admits she has picked up a few famous architect pals along the way. One of these is Frank Gehry, the Canadian architect.

“Janet and Frank go way back,” Gough says. “I think they met through her first husband, Tim, who’s an architectural photographer.”

It was at a dinner in Gehry’s honour that she met another famously opinionated and successful woman, Zaha Hadid. The architect offered her a lift home in her limo, but unfortunately the resulting conversation has been lost to history.

In 2004, Street-Porter’s strongly-worded column in favour of flattening old buildings spawned the Channel 4 programme Demolition, in which the public voted for the ones they wanted to bulldoze. It was won by the Cumbernauld shopping centre in Scotland. She presented the show with George Ferguson, the former RIBA president, who had been lecturing on the same subject. The column drew plenty of support, she says, and Will Alsop was among those who wrote to her to offer his backing.

“I hold strong opinions about conservation and that awful series Restoration, which I can’t abide,” she says. “Why save a building that is pointless? I can’t get exercised about saving workhouses or old swimming pools and turning them into craft centres or coffee bars. It seems quite obscene.” She pauses, fiddles with her sunglasses and looks away. “It pains me to say it,” she adds, “but the public will always raise money to save some mansion in the country which was some posh bloke’s house 300 or 400 years ago. I think it’s because it’s easy and comfortable, but unless we build more modern, iconic buildings, we’re going to have a city like a theme park.”

Street-Porter is not so fanatical when it comes to demolishing inner-city buildings and terraced houses in Liverpool and Manchester. The government is ripping these down as part of the housing market renewal programme, which it sees as the only way to boost housing demand in northern England.

“If the neighbourhood works well and the housing just needs refurbishing and there’s tradition and a sense of community, why uproot it? What’s the point? Build around it,” she says. “Now Ruth Kelly [the communities secretary] is determined to bulldoze this section of Liverpool, which seems insane.”

She pins the blame on John Prescott, the outgoing deputy prime minister. “He is a nightmare,” she says with a roll of her eyes. “Most of the government is really ignorant about architecture, isn’t it?”

But the housing renewal areas are not her only gripe with the government’s urban strategy. Like many others, Street-Porter is convinced the Thames Gateway and the other growth areas are destined to be a disaster.

“It’s not really been thought through, has it?” she asks, like a teacher chastising a naughty child. “I said so at the beginning.

“It’s no good just giving people shopping malls – they have to have great architecture. If you look at Ashford, they have a bypass full of retail boxes. Its centre has suffered even though it has an international station.”

What has also suffered is her relationship with the architect of her new Clerkenwell house, David Adjaye. The two fell out when the project was six months late and £100,000 over budget. Street-Porter proceeded to slate him in her Independent columns.

In a particularly vitriolic piece in July 2005, she wrote: “David Adjaye is someone I dream of ritually disembowelling or forcing to go through a nasty form of torture before mopping up the storm in my living room with his designer sweaters.”

Adjaye claimed last year that the row nearly put him out of business. “I was bloodied,” he said. “The phones went quiet for a while. If it weren’t for the fact that I had an international profile, it would have crashed my career.”

But Street-Porter, definitely now in scary mode, is adamant that there is no longer a problem. “I’m not having a row with David Adjaye because there is no row,” she says stiffly. I get the impression she has rehearsed this line in front of the bathroom mirror. “There’s nothing wrong with my house now, it’s finished, it’s fine and I’m living in it.”

As we’re packing up to leave, Street-Porter stops and looks me in eye. “I’m not having a row with David Adjaye and I don’t want you to say I am,” she says. Then she relaxes, almost smiles and adds: “I paid him, the house is finished and I think you’ll find he’s included it in his book.” She turns to leave and mumbles under her breath:

There she goes with that cursing again …

… likes
Newcastle, Centre Point, demolishing old buildings, City Hall (“although it looks like a soap dish”), hanging out with clever people and Kevin McCloud (“he gets people talking about design”)