Construction must respond quickly to the fast growing number of vacancies

Job vacancies grew faster than in any other sector in the UK economy in Q1, and there’s an elephant in the room no one wants to talk about

A balmy, sun-filled Easter bank holiday weekend was as welcome as it was unusual for those Brits able to take time off from the daily grind. And let’s be frank, the economic and political backdrop means most of us felt the need for a break, even if it just meant switching off the app notifications on devices that dictate the pace of modern working life.

One of the positive after-effects of the pandemic appears to be that we are more open about the impact of stress on our lives, and are talking about mental health and wellbeing with more confidence than before. And it looks like we will need to continue supporting each other in these ways because external pressures just keep mounting.

UK businesses are expecting profits to be squeezed as their costs spiral due to painful inflation, soaring energy prices and global uncertainties such as the war in Ukraine. Surveys out this week by Deloitte and BDO pointed to the prospect of slowing growth and businesses taking on more debt in order to survive. Meanwhile, the IMF has warned that Russia’s invasion of Ukraine will hamper global recovery and hit the UK harder than most: next year growth is forecast to be the slowest in the G7, at just 1.2%, while inflation is set to be the highest at 5.3%.

For construction, there is also a big deficit in skills to contend with. The Office for National Statistics released the latest data on vacancies, and the sector is top of the quarterly league – but not in a good way. Vacancies grew at 18.7%, faster than any other sector in the economy, meaning there were 48,000 jobs needing to be filled in the three months to March.

And the bigger picture is that the labour force for the entire economy is shrinking. The view from the Institute for Employment Studies is that government and businesses need to come up with a plan to help more people back into work. Its suggestions to focus on improving recruitment, job design and workplace support all sound very sensible. Our Every Person Counts campaign is currently highlighting that construction has some way to go on all of this, but there are signs of progress.

An anecdote to illustrate the point: talking to an estimator at a major contractor the other day, he said his job has been transformed by working from home since the pandemic. He remembers early on in his career getting up at 3am to drive down to sites in London for a 6am start and being expected to work through till 9pm. Now he can work flexibly around his kids’ school drop-off and pick-up times. He’ll never go back to the old ways.

The fact some contractors are thinking differently about where, when and how staff work is immensely refreshing

Not everyone is so lucky, and of course not everyone wants to work from home, but the fact that some contractors are thinking differently about where, when and how staff work is immensely refreshing – and should, among other things, encourage more women into the industry (see, for example, our interview with Sir Robert McAlpine’s Alison Cox). Then again, the scale of the skills shortage means firms would be foolish to do anything else.

One change almost all employers have had to deal with has been new immigration restrictions brought in since Brexit (read our feature on how construction is responding to the post-Brexit skills crisis). What is striking is how few firms openly want to criticise the new rules, with all the layers of bureaucracy and extra costs they entail.

Perhaps those working in the built environment do not want to appear to be “remoaners” – after all, that divisive Brexit debate is well and truly over, so the only option is to be pragmatic. Some said the new points-based system that came into effect at the start of 2021 is working fine, with recruits able to use the “skilled worker” route or the “intra‑company transfer route”. And, of course, many EU workers who were already in the UK now have settled status. It has also helped that architects and engineers have been put on the shortage occupation list for skilled visas, making it easier to qualify for entry.

> Also read: How construction is responding to the post-Brexit skills crisis

But there is also the feeling that talking about immigration has become so politicised that even constructive criticism is muted. Certainly, the effect of the new rules is that there are fewer EU citizens working in construction. And it would appear that even when it is possible to hire from the EU, applications are down on pre-pandemic levels as priorities for potential recruits have radically changed.

No doubt there are positives to be taken from the current situation: mainly that employers have to improve salaries, training and conditions to attract homegrown talent. It has always been the government’s big criticism of this industry that it relied on a steady stream of cheap labour from the continent, and once that was cut it would have to up its game.

The problem is that a major part of construction is made up of SMEs which are not in a position to invest heavily in developing staff and equally do not have the resources to navigate the complexity of the new immigration system. It will take time and money to adapt, and that leaves firms in a tricky spot as the market sees demand outstripping supply.

Immigration restrictions are here to stay, but we should be able to talk about how well, or not, they are working. This is not about looking back; it’s about focusing on the challenges to come. 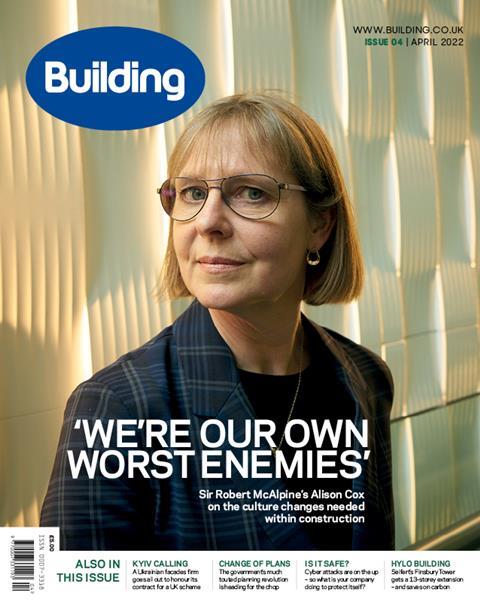 We know the construction industry has no shortage of suggestions for tackling the skills crisis. From reforming apprenticeships, to offering more flexibility, to increasing diversity, to supporting wellbeing and mental health, to providing better pathways from education to the workplace. We will be picking up on all these themes in more depth in future articles.

>> Also read: ‘Shaping Kier’s pregnancy loss policy has meant so much to me. I truly believe it will help others’

>> Also read: Why releasing gender pay gap reports may not be enough