2
10 ways the downturn is changing the construction industry
Focus

10 ways the downturn is changing the construction industry 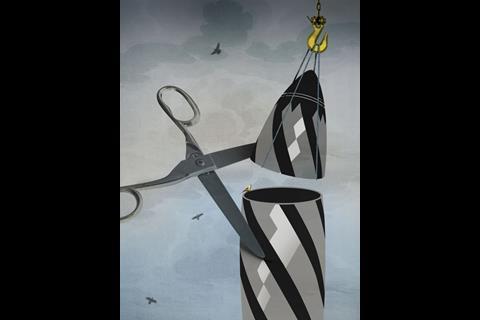 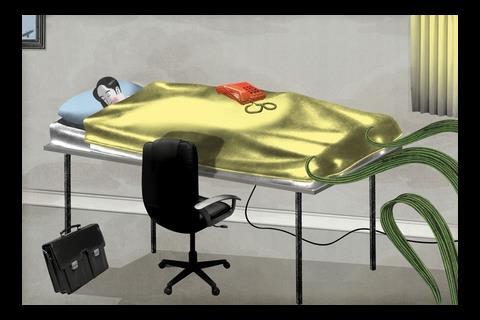 The days when clients competed to build the tallest, bendiest and greenest architecture are now over. But how will the new era of scrimping, saving and surviving change the industry, and therefore the built environment? Building makes 10 predictions.

Will the coming recession spell the end of the eruption of weird and wonderful towers in the City of London and beyond? Certainly, it will mean that the number of office towers being built in the near future will be slashed. And even if developers can find the funds, they will soon realise that flamboyant exhibitionism will no longer win them special attention.

As Simon Rawlinson, research director at Davis Langdon, puts it: “The zeitgeist of iconic architecture is now in the past. Clients are looking for greater value.” Even Will Alsop, that well known icon purveyor, concedes: “The level of debt in the UK is so huge, there is a change in attitude among clients.” But he adds: “In America the debt is, if anything, worse, but they take a more positive attitude.”

So does that mean a return to cheap, boxy buildings in the UK? Well, perhaps not. For a start, basic speculative development will be killed off by the impending tax on unoccupied buildings. Moreover, the green agenda embodied in the revised Part L of the Building Regulations will increasingly drive architectural form. The trend away from air-conditioning and towards natural ventilation and daylighting will deter deep-plan box designs and should lead to the invention of new – and perhaps exciting – architectural forms.

Marcus Dixon, associate in Savills’ residential research department, says 50-60% of schemes in London have been mothballed, a trend mirrored in other areas.

The reason is the over-supply of flats – the enormous number built for the buy-to-let market are no longer selling because investors have been put off by the difficulty of obtaining mortgages.

The same applies to deals struck during the boom years for developments with large affordable housing requirements and other planning gain elements.

Developers across the country are, therefore, attempting to renegotiate the conditions of their planning permissions to make schemes viable. For instance, every one of Berkeley Homes’ large schemes is being renegotiated.

The question is, what will replace the buy-to-let model that has helped to drive the property boom? A source at one top 10 housebuilder said he was “looking closely at build-to-let, aimed at graduates who are comfortable renting but can’t afford to buy a home yet”. The idea of a professional rented sector, run by dedicated property managers and backed by institutional finance, has long been promoted, by organisations like the British Property Federation. “It is a market nobody has tapped into.”

3. Return to the green belt

The debt in the uk is so huge, there is a change in attitude among clients. in america they take a more positive attitude

“In the past 12 months, the number of flats being started has dropped 50%. Now, of all planned residences, 25% are flats and 75% are houses,” says Richard Donnell, director of research at data body Hometrack. “To sustain this, builders are going to need 40% more land, as houses take up more room.”

The drop in the number of homes being built will also heighten the demand for land later, says a source at a top 10 housebuilder. “Planning authorities want to see planning densities come down, so if we are to get the numbers back up again – and there will be the demand in 2012/13 – this is going to mean masses more land being used up. Housebuilders will be much more comfortable looking at building more houses on green-belt land but will the general public be comfortable with this?”

So, where will this land come from? There is much anecdotal evidence that builders are increasingly looking at edge-of-town sites and away from the brownfield land they have been forced onto for the past 10 years. “In many areas outside London we are working with developers keen to build in the suburbs and greenfield sites, as they are much easier to develop,” says Savills’ Marcus Dixon.

When money is scarce, people get more litigious in an effort to make sure they get every penny due to them. Lawyers have noticed that, since the credit crunch, contractors have become more aggressive, renegotiations of contracts have increased and the “claims culture” has returned. In fact, income at some law firms’ construction divisions over the past five months is 50% higher than the same time last year.

“More clients are going to adjudication over final payments,” says Lindy Patterson, head of construction at law firm Dundas & Wilson. “It doesn’t cost much and only takes a month – for many it’s worth it.”

It is unsurprising that companies are nervous – consultant Pricewaterhouse Coopers (PcW) found there were 499 insolvencies in the construction sector in the second quarter of 2008, while the number of firms facing grave financial concerns was 547% higher than the same period last year.

The need for risk transfer and certainty is now writ large in clients’ minds when deciding on a procurement route. The result seems to have been an emphatic return to lowest bid, single-stage tendering. The large holes in contractors’ order books have hastened the process.

“When contractors were in the driving seat, they were only interested in two-stage tendering,” says Peter Fordham of Davis Langdon. “Now the client can suggest other ways and contractors are still interested.”

Single-stage tendering might not be universally loved but it does offer benefits. David Pelter, director of consultant Buro Four, says it allows clients to transfer risk to contractors – which they are increasingly prepared to accept if it means winning work.

When contractors were in the driving seat, they were only interested in two-stage tendering. now the client can suggest other ways

The fact that clients are becoming more focused on finishing on time and to budget is also pushing them towards single-stage tendering. However, it can expose clients to claims, which is what gave the process a bad name in the first place.

The contractors best placed to ride out the economic storm are those that can control costs and drive up efficiency. One effective way is to manage waste. Mike Watson, head of construction at waste group Wrap, says the costs are not always visible. “Companies don’t look beyond disposal, but the true cost is that of materials thrown into the skip.” The figure is estimated at £1.5bn a year.

Greater use of offsite manufacturing is helping contractors tackle this waste and deliver improved quality and quicker builds.

Dave Turnbull, managing director of modular construction specialist Caledonian, says speed of construction is still an issue for many clients, particularly in the debt-funded hotel sector. Over the past 12 months the firm has developed modules that allow it to build whole roofs offsite. “That has architectural challenges, because it limits the scope of what the architect can do.” But the benefits might now outweigh the drawbacks.

Turnbull estimates that Caledonian can build 70% of a project offsite. He says there is scope to increase this further, but that it will take a change in clients’ thinking.

Hard times will mean hard bargaining over building costs. Ideally this would mean value engineering through enlightened negotiation, but, with clients’ and contractors’ backs against the wall, it is more likely to mean something rather cruder.

The contractor’s first line of attack will be to opt for standard, off-the-peg materials that are tried, tested and cheap. “Bespoking is a significant cost element,” says Rawlinson. “It is asking contractors to take a higher risk, and in a tight market, they can’t afford to to do that.” Much more drastic will be last-minute cuts at tender stage, where no alternative solutions are considered. These can add substantially to the long-term cost of running a building, or make it so uncomfortable that it reduces the efficiency of users. Examples cited by Davis Langdon include reducing the durability of finishes in public buildings so that they cannot stand up to normal wear and tear. Another is editing out the electronic actuators for windows in naturally ventilated buildings, leading to stuffy interiors.

In straightened times, companies are understandably more inclined to stay put and adapt to their existing premises rather than move into new ones.

Yotel has made a killing out of converting corners of airport terminals into budget hotels. Now it is looking at doing the same with office space

If they really want to economise they can save space in their existing premises. Paul Harrington, real estate director of PwC and chair of the British Council for Offices’ occupiers group, says: “Most large organisations can take out 20-30% of their real estate without compromising efficiency. They can use space more intelligently and introduce hot-desking for staff on the move.”

He adds that companies with more limited resources can add excitement to their premises with a more basic “wash and brush-up”. This is, in effect, a rebranding exercise that sends a positive message to clients, yet entail little more than changing lighting, hanging artwork and installing flat-screen technology in reception areas.

Unoccupied buildings can also be adapted for new uses. Over the past year, Yotel has made a killing out of installing budget hotels in redundant corners of airport terminals at Gatwick, Heathrow and Amsterdam’s Schiphol. Now the company is looking at doing the same with redundant office space in London.

In a downturn, banks hold their cards close to their chests, and their money even closer. Jan Crosby, a construction specialist at financial services group KPMG, says obtaining finance is still the same game, but with lower numbers. “Before, you could get loans of 70% or 80% of a scheme’s value. Now, you might only get 60%” he says. “And only two out of 20 banks might lend it to you.”

The lack of private equity finance compared with a year ago means fewer deals are going through, according to an expert in property finance risk management.

Dundas & Wilson’s Patterson says contractors are also becoming more cautious. “In the good times they would take a risk – if things went wrong, they could make money elsewhere. Now, nobody will take that risk.”

Mark Andrews, chief executive of M&E specialist NG Bailey, says contractors need to be choosier about jobs: “You have to be vigilant about where the money comes from.”

However, the risk expert said good deals would emerge by spring next year. “Banks and other lenders will have to realise their positions on distressed debt and people should be unloading real estate between Christmas and the start of the new financial year in April. For those with money there will be bargains to be had.”

The downturn couldn’t have come at a worse time for the environment. Just as government and developers were beginning to like the look of their new green fingers the credit crunch has made everyone pause for breath.

They might not like to admit it but developers and housebuilders have been scouring their schemes for ways to make them more affordable and green elements have often been first to go. Speaking to building.co.uk’s sustainability channel recently, Michael Finn, the chairman of the Building Regulations Advisory Committee, said: “The profits aren’t there and people are going to be more cautious.” He added that it was likely that developers would revert to building types that were more tried and tested in attracting tenants, such as those cooled with traditional air-conditioning.

Although Keith Clarke, chief executive of consultant Atkins, concedes that “sustainability costs more”, he denies that his business is putting the squeeze on sustainable elements. Developer James Bowdidge, chief executive of the Property Merchant Group feels that developers need to play the long game: “Whoever emerges from the current crisis will be under increased pressure to deliver measurable reductions in environmental impact,” he says.