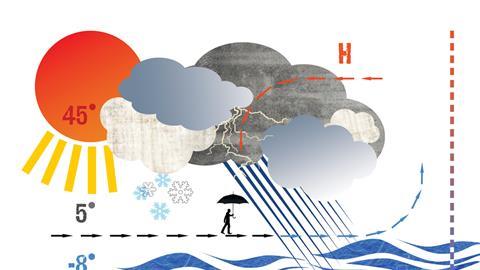 Some climate change is now inevitable. But are we doing enough to adapt building designs to our uncertain future?

The construction industry could hardly be accused of burying its collective head in the sand when it comes to preventing climate change. Reducing the sizeable greenhouse gas emissions associated with our buildings and the construction process has become a central concern for everyone involved, thanks to tightening regulations and rising energy costs.

But there has been considerably less progress on adapting to the inevitable climate change caused by our previous emissions. The momentum in the global climate system means that even if we stopped all carbon-emitting activity tomorrow, the climate would continue to change well into the next century. The UK is already warmer than the period meteorologists use as the baseline, which runs from 1961-90 - average annual temperatures have increased by about 1°C since the 1970s - and in as little as 30 years, it could feel like a very different place.

The industry won’t be able to ignore adaptation for much longer. In January 2012, the first five-yearly UK Climate Change Risk Assessment identified a number of increasing risks to buildings, such as damage due to flooding and coastal erosion, overheating and subsidence, caused both by more frequent downpours and more frequent droughts. The communities department has drawn up an adaptation plan which includes reviewing Building Regulations and the National Planning Policy Framework in line with those risks, as well as supporting research on overheating, cost-effective adaptation measures and climate data and guidance.

For now, the clearest idea of what adaptation will mean for the industry is provided by a series of pioneering studies funded by the Technology Strategy Board, on live projects across the commercial, education and healthcare sectors, both new-build and refurbishment. Teams assessed the potential consequences of the changing climate and developed strategies to future-proof buildings up to 2080. These projects will be the focus of a seminar at Ecobuild on Thursday 7 March, “Designing for adaptation: considerations for an uncertain future”, while the lessons from the first 26 are the subject of a new book from RIBA Publishing.

“Actually being able to explore the issues on live projects and road-test solutions is really valuable,” says architect Bill Gething, the book’s author. “Our built environment, and every aspect of how we live our lives, has evolved in response to a particular climate. Converting and upgrading our urban fabric to function in a climate it wasn’t designed for is going to be a real challenge.”

So what changes can we expect? The headline impacts for the UK are warmer, wetter winters, hotter, drier summers, rising sea levels, and more frequent extreme events. But building designers need much more detailed information to test their buildings’ future performance, and as they can no longer rely on historical weather data, this means getting to grips with new sources based on climate projections. Unfortunately, it seems that, even among the experts, the only certainty is change itself.

“When it comes down to a specific region of the Earth like part of the UK, there is no certainty at all about what climate change will mean,” says Professor Sir Brian Hoskins, director of the Grantham Institute for Climate Change at Imperial College London, who is speaking at Ecobuild on Thursday 7 March. “For the North American continent or the Eurasian continent, we can say that if the temperature rises globally by 4°C this century, they are likely to experience average temperature rises of more than this, say between 6-8°C. But when it comes down to the UK, there’s no such guarantee.”

The UK’s climate is particularly hard to predict as it sits between the weather regimes of the North Atlantic and Eurasia, which are projected to undergo different degrees of warming. The UK is also a lot warmer than it should be for its latitude due to processes in today’s climate, which may not continue. Hoskins points out that projections for the UK range from little change in average temperature over the coming century to a rise of as much as 8°C.

“By far the best thing we can do in preparing for the future is design our buildings to be very efficient in dealing with the current climate - the whole range of extremes, not just the middle,” says Hoskins, citing the cold winter weather in 2010 and the heatwaves of 2003 and 2006. “By the middle of the century, the summer of 2003 could be considered a relatively coolish one in Europe. To enable us to meet our emissions targets, buildings will have to be able to keep cool in the warmest summer and warm in the coldest winter but with greatly reduced energy usage.” 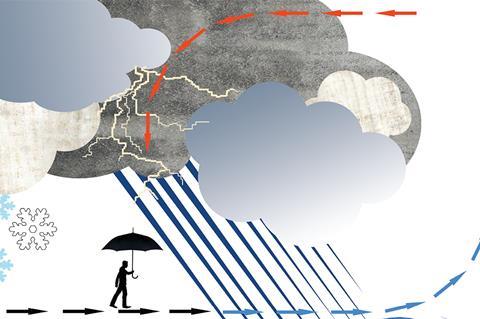 This relationship between adapting to climate change and mitigating it is a complex one. Accepting that the climate will change and trying to come up adaptation strategies doesn’t mean we can’t afford to let up on preventing further change - indeed, the more successful our attempts at mitigation, the less adapting we will have to do.

But there are also conflicts. Insulating our homes to save energy could make them stifling in summers in the not-too-distant future, while a requirement to maximise the use of available daylight in offices could lead to chronic overheating or soaring cooling energy bills.

One of the most striking conclusions of the TSB projects was just how badly our buildings are coping with these extremes right now, particularly the hottest. In many cases, detailed analysis revealed that buildings would fail to meet targets on overheating in the current climate, let alone in the future.

Overheating was just one of three areas teams were asked to investigate (along with structural resilience and the impact of changes in rainfall, flooding and sea level), but it quickly became the overwhelming focus for most, partly because their own experiences confirmed it was already a pressing concern. Architect Bauman Lyons explored adaptation strategies for an office refurbishment in Doncaster. “When we first came across the TSB adaptation programme, we instantly knew it was relevant,” says director Irena Bauman. “We’ve been aware for many years now that some of our projects have problems with overheating, even though we’ve been complying with Building Regulations and doing everything correctly.” Her team, working with engineer Arup, explored a range of different strategies for different parts of their building, including increased natural ventilation, technological advances in lighting, IT and phase change materials, a variety of shading devices and ceiling fans.

Gething notes that one of the biggest culprits is the large expanses of unprotected glazing that define modern office buildings. Indeed, in a future climate, we may find that some of our most established forms are no longer viable at all. “A changing climate means that we need to rethink environmental design from first principles, re-examining accepted design archetypes,” he says.

“When it comes to the uk, there is no certainty at all about what climate change will mean”

Two of the projects focused on extra-care facilities for older people, both initially with a standard layout, with rooms branching off both sides of long corridors. In Staffordshire, Triangle Architects discovered this would quickly lead to unacceptable - and potentially fatal - levels of overheating, in a climate that they say could be similar to Casablanca by 2080. This led them to explore such drastic strategies as wholesale facade replacements and introducing openings between floors to improve ventilation.

On the other hand, Exeter-based Gale & Snowden Architects and Engineers completely redesigned the building to introduce cross-ventilation and produced a radically different kind of scheme, with flats overlooking the grounds on both sides and arranged in three clusters. “Our analysis showed that achieving cross-ventilation for night-time cooling is one of the most important low-energy strategies for reducing overheating,” says founder David Gale, who will be discussing the project at Ecobuild. “The thing is, if you don’t design in the cross-ventilation at the outset, it will be very difficult to introduce in the future and, as a result, a building will overheat or require energy-intensive air-conditioning to prevent overheating.”

This should be worrying news for the future occupants of many traditional extra-care projects already built or currently under construction. But the adaptation challenge could also prove a rich source of inspiration for building designers - the Exeter extra-care scheme, for example, will not only cope better in future summers, it also promises to be a much nicer place to live for a range of other reasons.

For the teams themselves, the chance to focus on adaptation was a revelation, and several have seized upon it as a new business opportunity, developing specialist services for clients. But while there’s a clear case for future-proofing buildings, persuading clients to pay for it is another matter. It’s already hard enough to get developers to fork out for improvements that may pay back in five years. Climate change adaptation strategies with a timeframe of 30 years, or even longer, will be a considerably harder sell.