In the latest in our series on Building’s Agenda 15 campaign ahead of the next election, and fresh from the Ecobuild sustainability event, we report on what the industry wants the government to do about green regulation

At the start of the year we asked the industry to answer six questions in order to contribute toward building a manifesto for the construction and development industries for the next election. This week we are looking in detail at question four:

4. What do you believe is the most significant policy change the government could make to promote a greener built environment? 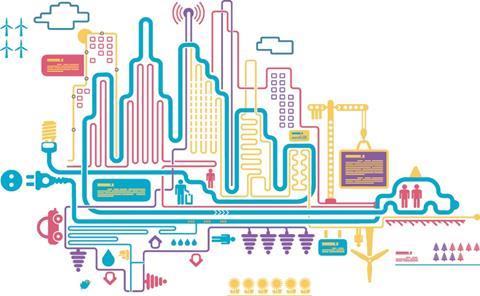 Climate change secretary Ed Davey made a decent fist of defending the coalition government’s record on sustainability and the built environment with his key-note speech at Ecobuild earlier this month, though conceding problems with the roll-out of the Green Deal. Davey described a track record including the establishment of the Green Investment Bank, the installation of hundreds of thousands of solar PV panels on homes up and down the country, and a continued commitment to zero-carbon homes.

But many observers supportive of the green agenda have been disappointed with the coaliton’s progress, citing U-turns on feed-in tariffs, and the watering down of both the ECO programme and the aspirations for the Green Deal. Most concerning to some has been the fracturing of the consensus around the need to tackle climate change, opening the way to rhetoric - from politicians right up to chancellor George Osborne and prime minister David Cameron - that implies green regulations simply hamper growth and add cost.

The fourth question in Building’s ongoing Agenda 15 campaign - designed to come up with a construction industry manifesto for the next election - asks: what is the most significant policy change the government could make to promote a greener built environment?

This is the question Building put to its 50 sustainability rising stars at this month’s Ecobuild conference - asking them to write their answers on Post-it notes on a wall in the Building cafe at the event. Here we analyse the merits of four of the best ideas we harvested, and whether they might work in practice.

The effects of climate change pose a range of problems if buildings are to remain usable and continue to keep their occupants safe and comfortable. These threats to the proper functioning of the built environment require adaptions including the need to provide additional green space to keep urban environments cool, to making basic infrastructure more resilient to the expected increase in high winds and storms. However, overwhelmingly the most significant expected adaptions relate to flooding and overheating.

The government already purports to take the long-term increased risk of flooding into account in the planning of new communities, with planning guidelines that limit development on flood plains. However, as the events of recent weeks have shown, these changes are not proving to be sufficient, with growing calls for the design of homes as well as the location of homes to be adapted to suit flood risk. Bill Bordass, founder of sustainability consultant William Bordass Associates, says: “It’s partly about building differently, and at different levels, to ensure homes aren’t wrecked if they do get flooded. For example, putting tiles rather than carpet on the ground floor.”

But there is cynicism over the government’s willingness to consider additional Building Regulations in this area. Neil Cutland, director of energy efficiency and sustainability consultant Cutland Consulting, says: “We’ve had incentives to build like this already in place, with the Code for Sustainable Homes (CSH), for example, which gave credits for building houses with less surface run-off. But the government is currently planning to abolish the CSH.

Experts debate the extent to which overheating will be a problem in future, with a recent report by the Good Homes Alliance finding a large proportion of the homes already having problems are new-build flats. At the moment Building Regulations in the area of thermal performance are focused not on adaption but on attempting to reduce global warming itself by limiting carbon emissions from homes - essentially designing them to keep the heat in. But this can cause problems in hot weather when letting the heat out becomes vital.

Bordass says modern homes are often not well-designed in terms of adaption to hot weather, because of excessive value engineering and an obsession with health and safety leading to restricted window opening. But he is not convinced that ever more detailed Building Regulations stipulations is the way forward either. “It should promote some basic things such as windows which open properly, bTut shouldn’t get in to requiring more and more technology. It should focus much more on outcomes.”

Embodied carbon is the measure of the carbon emitted in the production and transport of the materials used to construct buildings. With changes in Building Regulations meaning buildings in use are becoming ever more energy efficient, the proportion of a home’s carbon footprint which comes from the embodied carbon held in the materials becomes ever greater. Around 5-6% of UK carbon emissions come from the materials sector, showing the importance of reducing emissions in that area. But whereas for a traditional house embodied emissions may make up 10% of total emissions over a 60-year life-span, for a new-build, low-carbon house embodied energy may be as much as 30-40%.

The need is clear, with companies such as Sturgis Carbon Profiling setting up to fill to the desire to measure embodied carbon for eco-conscious clients.

However, there is scepticism over whether the measurement of embodied carbon - particularly given the variation in how construction materials are transported - is developed enough to allow it to be written into Building Regulations without resulting in potentially serious unintended consequences - for example, specifying “sustainably sourced” timber that have been transported thousands of miles. Lynne Sullivan, co-founder of sustainableBYdesign, says: “We’ve only just in Europe agreed a method to calculate [embodied carbon], but a third of construction materials come from outside the EU, where you really can’t rely on their calculations.

“Unfortunately I don’t believe the calculations that can be made, based on generic values, are really worth the paper they’re written on half of the time. Obviously we want to be measuring embodied carbon but at this point it would be a distraction.”

Bordass agrees, saying: “Taking a whole-life view is essential, but if you over-codify Building Regulations you get into the law of unintended consequences all over the place.”

In 2011 the coalition government committed to banning the letting of commercial or domestic properties that performed poorly in terms of energy consumption, in an ambitious bid to drive retrofit work. The legislation implied that only those properties with an EPC rating of E or better would meet the “minimum energy performance standard”, and therefore be able to be let.

However, nearly three years later, there is still no clarity on how the legislation will work in practice, with the industry waiting on the detailed guidance. In particular, the government hasn’t clarified whether it intends to introduce what is referred to as a “hard start” to the legislation - meaning that all of the upgrade work would have to be done in advance of the 2018 deadline. It is expected that it will instead opt to say that only any new tenancies after 2018 would be affected - but there has been no final decision. In addition, the legislation leaves the option open to use a measure other than an EPC to judge the fitness of the property, and doesn’t stipulate that it has to put the bar at an EPC “F” rating.

So while clients and landlords expect and accept that the measure has the potential to drive a huge amount of retrofit work, these uncertainties and other more technical points mean the market is in stasis.

Patrick Brown, assistant director of sustainability at the British Property Federation, which has been marshalling industry feedback on the plans, says there is hope that the government will consult on the guidance in April in time to put the final regulations in place before the next general election.

Miles Keeping, partner at Deloitte Real Estate, says: “We need clarification on the final regulations. Timing is key - this is an urgent matter now.”

The publication of the Armitt report into long-term infrastructure planning last year underlined the vital importance of political structures that enable stable political support for priority projects that do not fit into a five-year political timetable. A number of the contributors to Building’s Ecobuild wall mentioned this point in different ways. For companies to invest to gear up for major construction or retrofit programmes, it requires the confidence that these programmes will continue. Lynne Sullivan says: “This is absolutely vital, a key priority. We’ve got to rebuild leadership and long-term strategy in this area.”

Sullivan points to the potential introduction of consequential improvements in Building Regulations, where those improving their homes would be forced to upgrade the energy efficiency of other parts of the property as an example of where this would make a difference. Consequential improvements were proposed by both Labour and coalition governments but both times were withdrawn because of the policy’s potentially toxic political ramifications - the Daily Mail dubbed it a “conservatory tax”. Sullivan says: “If both parties seriously considered it, then surely they could have agreed a consensus position which could have neutralised it as a political issue?” 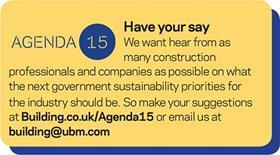 But it is difficult, by definition, for one party on its own to solve these problems. So what structures or manifesto pledges could deliver this? John Alker, policy director at the UK Green Building Council, asks: “Is there a role here for the committee on climate change to be an independent council which will set out policies agreed on by all parties - like the Howard Davies Commission with airport capacity?”

However, he says any recommendations would be hard to enact. “Even if you can get consensus from the major parties, you’re not going to get consensus from UKIP, which will mean controversial topics will remain a political issue.”

Jane Davidson, former minister for environment, sustainability and housing, Welsh Assembly Government, makes the case for a unified ministry in charge of delivering on climate change

“If you have a major government priority you want to deliver, then you need to ensure the right government structure to foster delivery. We were able to deliver the largest retrofit housing project in the UK in Wales during my tenure as we had located the relevant responsibilities to mitigate and adapt to climate change into the environment, sustainability and housing ministry. This included planning, energy, housing, building regulations, climate change, energy efficiency, waste and environment. The important thing is that if you’re going to deliver on a major project - you don’t want your structures to get in the way.

“All governments seek to demonstrate ‘joined up thinking’ but the reality is that where responsibilities lie has a huge impact. Structures do matter. Having all the key functions in one portfolio enables the delivery of a key government priority plan to be accountable to one ministry - not three or four. When these responsibilities are shared across four ministers, some of the beneficial synergies are lost.

“The test of the importance of a government priority is the level of its budget and the effectiveness of the delivery mechanism to deliver it.”