Are rooftop developments the answer to London’s housing crisis?

Are we looking in the wrong direction for solutions to London’s housing crisis? Airspace developers tell us to raise our eyes to the rooftops and imagine hundreds of thousands of new homes atop existing buildings – but to make that happen they need planners to share their vision. 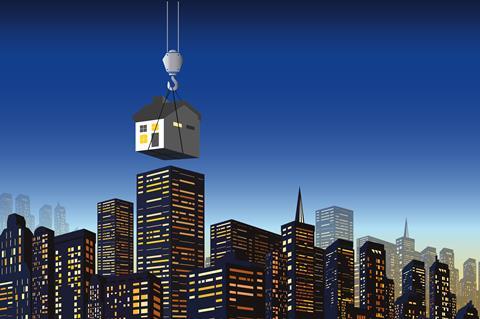 Imagine a world where there is enough space in London for the hundreds of thousand of new homes it needs – without building soaring skyscrapers or letting the city limits sprawl – where it’s no longer a case of scrambling for every scrap of land. You don’t need to imagine: it’s already true.

Or so say a new breed of specialist developers,  who claim we have much more land than we think. According to airspace developers, there is enough suitable rooftop space – on top of existing residential, commercial and mixed-use buildings across the country’s capital – to create up to 200,000 homes.

“If you added a single storey right along Oxford Street – that you wouldn’t be able to see from the street, mind you – you would add the same floorspace footprint as building another Shard,” says Val Bagnall, managing director of Apex Airspace, the company that Homes England recently gave a £9m funding boost to develop 78 new homes across five London sites.

Apex has since been given an additional funding boost by way of a £10m development loan from London mayor Sadiq Khan. So is this really a solution to the housing crisis, in urban areas at least? Or is it more pie in the sky than cash in the attic?

In January, the government’s housing agency revealed it had committed cash to fund Apex’s schemes in Putney, Tooting, Wallington, Walthamstow and Wanstead (see Apex’s funded schemes). Bagnall describes Homes England’s move as a huge step forward for the sector, as finding funding for airspace developments has been a challenge.

“Being an SME developer in a new market, using a new land supply, there hasn’t been a good understanding of what it was we were wanting to do in the finance sector,” he says. “We don’t check off boxes on any standard lenders’ checklists, so they were overpricing the risk.” Bagnall says the Homes England funding gives Apex the opportunity to create a “successful track record” for this type of project, which should make financing easier.

Homes England, for its part, ascribes its decision to inject cash into Apex’s schemes to the company’s use of modern methods of construction, which the agency is promoting in its efforts to tackle the UK’s crippling housing crisis. Homes delivered by rooftop development are largely built using offsite manufacturing.

A spokesperson for Homes England says: “We encourage developers to use modern methods of construction and increase the capacity of the offsite manufacturing industry, including through our provision of development finance.”

Bagnall says that while the funding boost is a coup for the sector, securing it was not a simple task. “I suppose the journey started at a meeting we had at 10 Downing Street in October 2017. An adviser to the Ministry of Housing, Communities and Local Government who had heard us speaking about rooftop development brought us in to discuss innovative ways to help with housing supply.” He says talks with the department led to an open door at Homes England, an agency Bagnall applauds for its “courage and genuine commitment” to look at different approaches to helping tackle the housing crisis.

“Homes England has a real conviction that things need to change to deliver more homes, and investing in sectors such as ours is just one way they are showing that,” he says.

The spokesperson for Homes England says: “Airspace development is just one of many different types of modern construction that Homes England is supporting in order to increase the supply of homes across England.” The housing agency, which has been tasked with addressing the acute shortage of homes across the UK, has previously shown its commitment to promoting the use of modern methods of construction on pilot sites in Birmingham, Hemel Hempstead, Cambridge, Milton Keynes and Warrington to stimulate their uptake. These are good-quality sites that it has brought to market to provide opportunities for developers to innovate using modern methods. 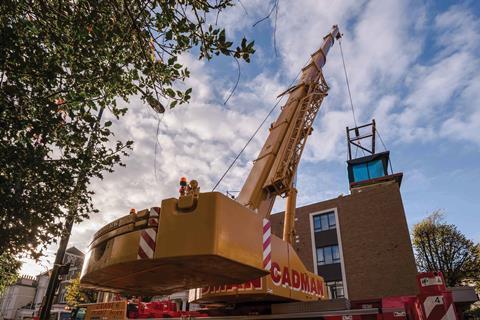 Speed is the secret

The ability of rooftop or airspace development to deliver new homes at pace is one of its biggest benefits, according to Bagnall, who says the 20 rooftop flats his company is set to develop in Wanstead will take just two months to install on site.

For Homes England, speed of delivery was a factor in its decision to back Apex’s schemes. The spokesperson says: “This approach will help to accelerate the pace of delivery and ensure a more resilient and competitive market.”

Aaron Emmett, managing director at another airspace developer, Click Properties, says he is not surprised that Home England was impressed by the speed of airspace projects. “The timeframe from the moment we get planning to when new homes are on site and keys can be handed over is about five months,” he says.

But, says Emmett – whose firm has committed to a 23-apartment development on top of a commercial building in Camden, north London – the whole process could be even faster, if it wasn’t for delays caused by the planning process. The time it takes to get planning permission for airspace schemes can blow total delivery timescale out to around 18 months, he says.

Emmett is encouraged by Apex’s cash injection from the homes agency, saying: “Any funding in this arena is a positive as it demonstrates the government’s commitment to this type of development.” However, he contends that an investment of £9m across five developments is not going to be enough to make rooftop development take off – what would be far more effective is planning reform: “While I am delighted to see government committing to our sector, I can’t help but wonder whether spending £9m on staffing planning departments and improving restrictions may have had a more lasting impact.”

Putney: The project in Putney, south-west London, will build four new flats atop an existing building, but  unlike most of the other schemes it will not be above a purely residential building. The additional homes will be built above a three-storey mixed-use scheme made up of ground-floor retail and two floors of flats.

Tooting: This project will see the development of four two-bedroom penthouse apartments on top of an existing apartment block in Marion Court, Tooting, south London. As part of the project Apex will install a new lift and upgrade the stairs for both the new and existing elements of the block. The development is located moments from Tooting Broadway station in zone three, while Clapham Common is eight minutes away. 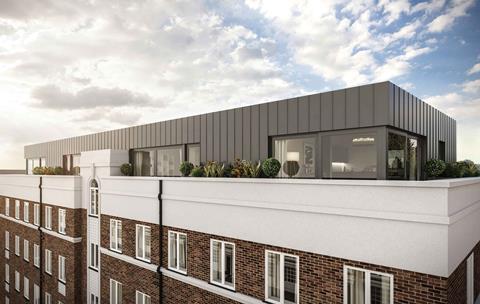 Wallington: The south London scheme in Wallington is the largest of those being funded by Homes England. The project will deliver 42 new homes, 13 of which will be affordable and 29 for private sale. Of the 13 affordable units, seven will have one bedroom while the remainder will have two. The homes for private sale will be a mix of 19 one-bedroom flats and 10 two-bedroom homes. Apex managing director Val Bagnall says the existing development will be three storeys higher after the addition of the new homes.

Walthamstow: In Walthamstow the project will merge two existing blocks of flats. The two four-storey blocks in east London will each have four flats added, while Apex will add a lift that will connect the two blocks and service both the new. The project will also repair the roof of the existing development, which currently leaks, and give both blocks a “facelift”, says Bagnall.

Wanstead: The development in Wanstead, east London, will create 20 flats. This will include 14 one-bedroom and six two-bedroom homes. They will be built across the top of five existing three-storey apartment buildings. Bagnall says that four flats are set to be added to the top of each building, with the 20 flats installed on site over a two-month period.

Emmett reckons the planning process is probably the single biggest barrier to airspace development, saying fewer than half the projects his firm puts forward get planning approval. “You never get to approval without battles and appeals,” he says.

“I would love to say there was a council in London that really got it [airspace development], but that just hasn’t been our experience. If there are councils out there though who are now looking at this, we would love to work with them.”

While there has been plenty of talk on changing planning regulations to improve the process for airspace, says Emmett, none of this has flowed through on a practical level. “I asked the question of Sadiq Khan back in 2017 and nothing has changed on an operational level. And to be honest I don’t see it substantially changing in the next five years.” Khan’s recent £10m boost for Apex could herald a change in attitude, perhaps.

While not disagreeing, that planning has been a serious barrier to airspace development, Bagnall says he feels change is coming. He cites the mention of airspace in the new National Planning Policy Framework, published in 2018, as a sign that things are moving in the right direction. “It’s the first time the term ‘airspace’ has been included and it’s also in the new draft London Plan,” he says. “Airspace development hasn’t even been on planners’ radars; now it becomes a consideration.”

Bagnall also says his company is in talks with government to trial the use of permitted development rights – which allow work to go ahead without requiring planning permission – for certain types of airspace developments. He says while there are issues with permitted development – and Emmett agrees – adjustments could be made to make it work for rooftop development.

“The problems usually have to do with a drop in quality, that the schemes can be a bit hit and miss, and the fact the planning authority loses out on the planning fee. But we are happy to guarantee quality, prove we can reliably deliver schemes, and pay a fee. All we want is a quicker process,” says Bagnall.

The positive signs are there, he says, and he is hopeful for the future, believing airspace development could unlock London’s potential to solve the housing crisis: “When looking for land in London we look down. The key is that we need to start looking up. Things are heading in the right direction.”