BIM: Are you ready for the fourth dimension?

There are two 22 Bishopsgate towers - one is rising from the ground in the City of London, and the other exists in a complex 4D virtual reality model intended to optimise every aspect of delivery. We ask if the industry at large is prepared for a new reality 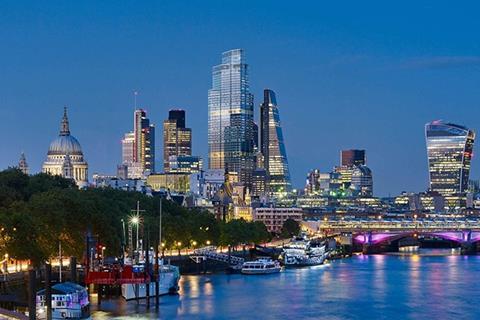 At 294.94m AOD, 22 Bishopsgate will be the tallest building in the City when complete

22 Bishopsgate will be the tallest building in the City of London when complete. But it has another point of interest that is a good deal less obvious: the project is pioneering a radical form of BIM that incorporates advanced virtual reality and 4D modelling applications.

The under-construction tower claims to be the first in the world to link digital construction and logistics planning to interactive virtual reality (VR). In so doing, it hopes to open up a whole host of new possibilities about how BIM can be applied as a logistics and health and safety tool as well as the facilitator of the design and construction process.

The sheer scale of 22 Bishopsgate makes it an obvious candidate for the kind of advanced logistics BIM application that has been developed for the project. With its deep triple basement, complex interface with existing structure, limited site access, tight historic urban context, 62 storeys, 57 lifts and a gross external area of 2 million ft2, meticulous logistics planning during construction is of the utmost importance on this build. The huge 4,200-activity schedule (the list of activities the contractor expects to carry out in providing the works) also added a significant logistics challenge.

This also means that if the system works with this level of complexity, it will probably work just about anywhere. But how exactly does it work? And how close is the rest of the industry to adopting similar practices?

22 Bishopsgate’s logistics BIM capability has been developed by London-based advanced 4D programmer Freeform. Freeform inherited the federated BIM model of the tower from contractor Multiplex and structural engineer WSP. The model had been developed from the initial design of PLP Architects.

When Freeform received the model, it had all the structural and design information relating to the project but no information relating to logistics of construction such as site escape routes, signage and safety handrails. Ordinarily these would probably be added by the contractor itself but Freeform’s mandate was to create a model where this information could be presented in an immersive, 4D format. 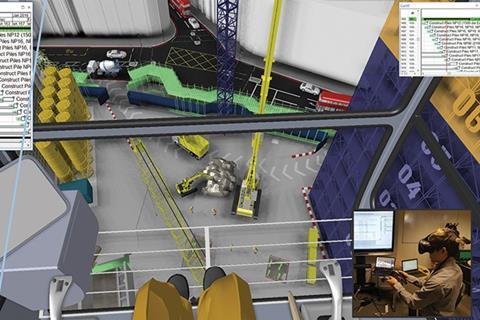 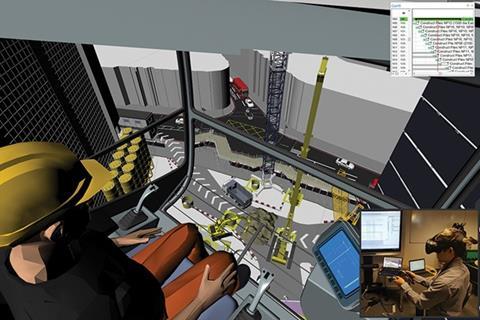 Over a six-month period and working in close collaboration with the contractor via a series of meetings and workshops, Freeform then added in a new layer of logistics information onto the original model. This included a huge range of highly detailed site and safety data such as hoarding lines, access gates, pit lanes, tower cranes positions, temporary site staircases, edge protection details, secondary and tertiary escape routes and handrail positions. Because the tower famously reuses the unfinished stump core of its aborted predecessor, the model also contained existing piling locations.

There is also an adjacent component of the project that involves the placement of the model into a virtual reality environment. This gives the opportunity for the design team to experience the safety and logistics aspects of the build with the same immersive, digitally simulated, real-life quality and accuracy previously reserved for client animations and commercial marketing.

According to Freeform founder James Bowles, the core benefits of the process centre around its ability to streamline, democratise, simplify and more powerfully visualise the logistics aspects of construction. “It opens up the logistics and construction sequence of the project to the entire construction team and design chain. This encourages the entire team to take far greater ownership of the process and in turn allows that process to benefit from heightened exposure to a broad range of skill and expertise. The virtual reality aspect also makes it much easier for everyone to understand the logistics of site safety.”

Arguably Neill Stratton, construction logistics manager for Multiplex, is even more enthusiastic. “Simply put, this technology is incredible and it has the potential to revolutionise the way the industry works in the very near future. The immersive experience provides a level of design detail and scrutiny that you simply cannot recreate in a 2D or even 3D format. The traditional way site logistics are managed is through a combination of hand-drawn sketches and 2D drawings, with very few companies truly embracing the use of 3D modelling tools. We’d walk round a site describing where items like tether zones, green routes and signage need to be installed. Maybe 70% would be correctly set up, through drawings not being read correctly, the direction being lost in translation or unforeseen obstructions. 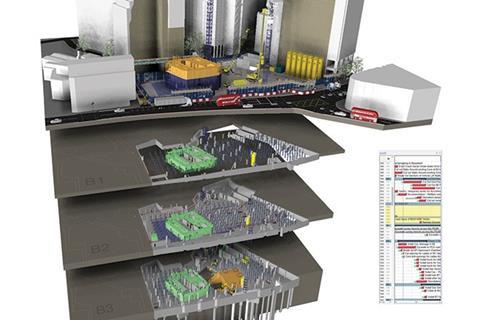 “Obviously that would cause a degree of frustration. But now, we can immerse ourselves in the model and work with the exact conditions we’re going to find on site, even to the extent of experiencing the high-level view a crane operator is going to see.”

For Stratton, the question of design amendments is also crucial. “It makes the process of making changes incredibly nimble. Before, it might take up to five-to-six hours to spot an error, redraw the drawings and then distribute them to the team. Now, by using a digital model in a VR space that process can be done in as little as 20 minutes by walking through the model and making changes as you go along.”

Both Bowles and Stratton are keen to point out that the tool is not about making changes to the core design of the project, which Stratton describes as already “fixed”. Bowles also refers to the process as “one branch” of the construction process, albeit one that “could theoretically come together to inform other aspects of the scheme, such as cladding or facade, if required.”

But for Stratton, the key benefit comes down to efficiency. “Although we are preparing a case study of our experience on this project, it’s too early to accurately quantify what kind of savings this process offers with regard to programme and cost. But what it undoubtedly does deliver is efficiency. If it’s taking me 20 minutes to implement a change that might previously have taken a number of hours, then that’s a better use of my time, which frees me up to create value elsewhere. That will inevitably and eventually have a positive impact on cost and programme.” 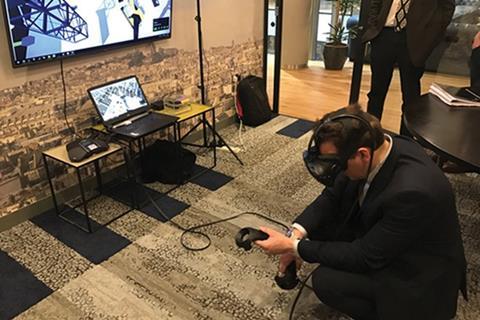 The VR technology is experienced through a headset and hand controls

Freeform’s Bowles concurs. “It’s difficult to put a precise figure on time and cost savings but in terms of overall budget, using this kind of technology could perhaps lead to a 1:10 or 1:20 return in investment. It’s just a better way of working.”

But it might not be a way of working that everyone is open to yet, as Bowles explains. “22 Bishopsgate is a huge construction project so it might seem to be of a scale that warrants this kind of VR modelling. But the biggest challenge to wider implementation of this technology isn’t scale but culture. If you view this as an additional exercise tagged onto the main build then you won’t be able to get the best value out of it, there has to be a real appetite across the industry for moving things forward in this direction.”

Tom Bradley is project executive at Lipton Rogers Developments, which is the developer behind the tower. Although he too recognises the ability of the 4D VR model to “react quickly to changes and create a surety of delivery”, he questions whether the industry is well placed to reap the benefits such technology offers. 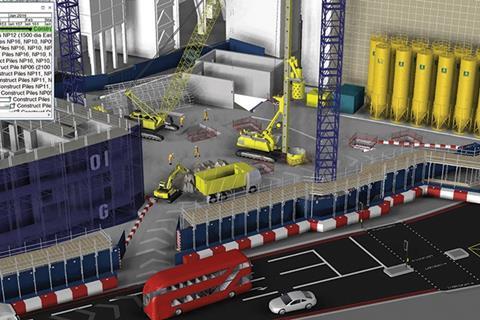 “The uptake of this kind of technology in the construction industry has been traditionally slow. In reality, a huge amount of work – particularly the planning of site logistics – is still carried out two-dimensionally, with 3D tools predominantly used retrospectively. The capabilities that this tool offers, notably the ability to test various logistical scenarios at any point along the construction timeline, have the potential to add significant value to the construction process.”

It is of course an opportunity to which BIM is central and so presents a new strand by which BIM can further disrupt the traditional practices embedded in the construction industry. BIM’s potential role in overhauling construction planning and site logistics has long been recognised and landmark projects like Heathrow Terminal 5 have already made early use of the advanced technologies now being pioneered at 22 Bishopsgate. Gary Sullivan is chairman of construction logistics specialist Wilson James and while he welcomes the use of 4D and VR technology in this area, he argues that more can be done. “To use technology to visualise the site logistically can only be a positive. Not only does it help to understand the issues of horizontal and vertical movement around site, it will help bring life and colour to standard drawings.

“However, to achieve similar production efficiency as, say, the automotive industry’s six sigma methodology [a standard of quality recognised worldwide], BIM in all its applications needs to integrate with a supply and delivery management system such as Fulcrum. This kind of efficiency can only become a reality when BIM integrates with logistics forecasting and delivery software, as well as 4D modelling.” 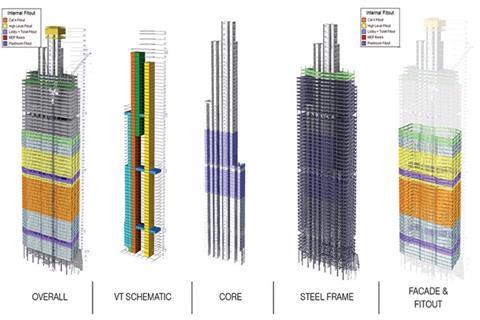 Equally Mark Norton, head of BIM at construction services company ISG, also believes that the technlogy deployed at 22 Bishopsgate could go further. “Any tool that enables us to make faster, smarter and more intuitive decisions on building sequencing is something we should all be paying close attention to. However, there is a missing element here – and that’s context. ISG is currently working on technology to fit the 4D sequence into the physical site itself – so what we’re talking about is actually merged reality.

“Imagine standing on a recently poured floor slab and having the ability to see walls, ceilings and services instantly emerge around you, from any angle or point on that floor. In a new build context, this is hugely beneficial to identify sequencing issues, but imagine applying this technology within existing buildings for complex refurbishments and cut and carve schemes? This would be a paradigm shift in how we sequence work based on the physical structure around us.”

It is a vision of the future that not all may yet be ready to embrace – but may offer significant benefits to those who are prepared to take the next step into the new, virtual reality.