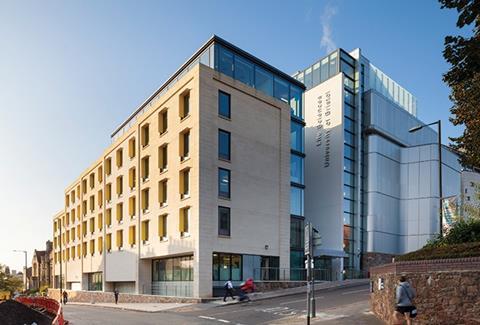 There are two commonly accepted design approaches a new building can adopt when attempting to engage with existing historic context: harmony or contrast. While this assessment may be simplistic, it is hugely effective when considering the countless buildings that fall into either category. For instance, Richard Rogers’ Lloyds Building and Grimshaw’s nearby St Botolph office block both react against the densely prescribed historicism of their surroundings. Yet developments like Farrell’s Brindleyplace in Birmingham or the Royal Shakespeare Company’s permanent home in Stratford-upon-Avon by Bennetts Associates positively embrace such historicism, albeit within a contemporary idiom.

It is relatively rare to find a building that actively embraces both harmony and contrast, but Sheppard Robson’s new Bristol Life Sciences building is one of them. The £65m University of Bristol faculty contains state-of-the-art teaching and research laboratories, one of which, with a capacity of 188, is the largest of its kind in the UK.

But contextually, it is its location rather than its function that is significant because this building is essentially split in two and appears, elevationally at least, to be two entirely separate buildings. The teaching block has been constructed on the street side of its central atrium while the laboratory block is located on the other. Each also adopts an entirely different elevational treatment in order to more effectively relate to the strongly divergent urban contexts it faces on either side, a process which Sheppard Robson lead partner David Ardill mischievously describes as “purposefully inconsistent”.

Bristol Life Sciences also comes at a time of burgeoning growth and architectural quality within the scientific research sector. Stanton Williams’ superb 2012 Stirling prize-winning Sainsbury Laboratory stunned many by proving that research buildings could be sculpted and elegant, and HOK’s vast Francis Crick Institute is set to become a global hub for biomedical research when it opens next year.

And Sheppard Robson’s own Siemens HQ in Abu Dhabi, also led by Ardill and one of the first Middle Eastern buildings to attain coveted LEED Platinum status, officially opened last year. Not surprisingly, many of the pioneering environmental and technical ideas explored at Siemens, particularly with regard to solar shading, have also been reintroduced at Bristol.

The Bristol Life Sciences building enjoys an enviable position atop St Michael’s Hill, one of the highest peaks in Bristol. The scenic views over the city offered from the top of the hill, as well as the charmingly picturesque and primarily Georgian character of the steep, winding street named after the hill on which the new building is located, provide clues as to the strong conservation and heritage constraints that helped forge its dual elevations. 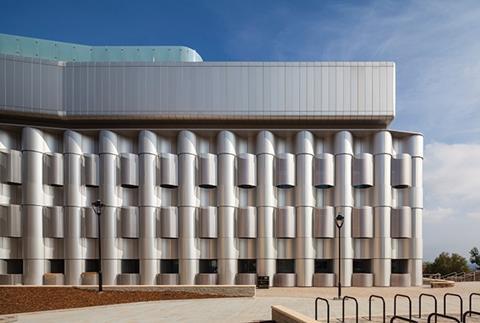 “There were a huge amount of constraints,” explains Ardill. “The site is affected by three conservation zones and has an impact on several critical views across the city. We had to be very clear about our impact so rather than fight an inevitably losing battle against context, we took the early decision to devise elevations that rationalised the streetscape.”

And this essentially is what the new building facade here has done. The six-storey street elevation is broken into five vertical segments to minimise building mass and ape the vertical proportions found in the Georgian townhouses that populate much of the rest of the street. Each block also steps back slightly from the other with the most southerly block reduced to four storeys to further reduce bulk - a move imposed by planners but which has led to the creation of a stunning rooftop terrace here offering spectacular city panoramas.

The steeply sloping prospect of the street also helps mitigate the building’s mass and subtly absorbs the shift from six to four storeys at either end. Additionally, the recessed ground floor podium varies in height across the facade creating a shifting base that accentuates the individuality of the vertical facade components, further breaking down the bulk and mass of the building.

The facade is encased in a warm, sand-coloured reconstituted stone, vividly reminiscent of the soft Bath sandstone that makes such a memorable contribution to local vernacular. Windows too assume a loosely traditional arrangement with punched vertical openings soberly arranged into neatly stacked rows in the Georgian manner.

As is the contemporary manner for pseudo-classicism, the entire facade is shorn of embellishment, with the exception of the softly rusticated piers that divide the five vertical fronts, the thin lintels that protrude daintily below the windows and the protruding reveals that provide solar shading to the top and southerly side of each window.

Adrill describes this facade as “not a traditionalist composition but a controlled street elevation” and to all intents and purposes he is right. This is no slavish classical block and nor was it meant to be; while its overall vertical proportions allude to classicism, the oscillating podium and the proportions of the spacings between the windows do not. The facade is best read as an efficient contextual device and while it is hardly exciting or inspiring, it is plain and polite enough to succeed as such. 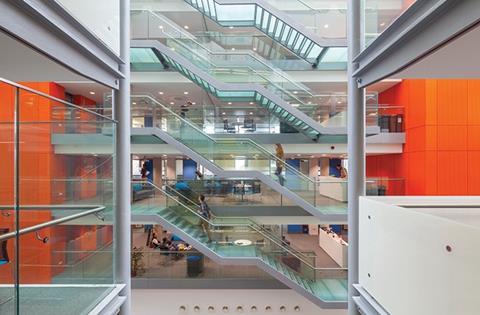 A mildly jarring visual factor is the protruding solar shading to the windows which appear as messy, visually discordant add-ons to an elevation composed with more straitened tones, particularly when viewed obliquely. But this shading provides an important, singular clue as to what elevational surprises await on the other side of the building.

“Essentially laboratory buildings are about minimising and not maximising daylight,” says Adrill. “Solar shading is something we explored extensively on the Siemens building and here it also has a structural as well as an environmental impact.

“By having as much solar shade as possible we were able to minimise cooling loads within the teaching half of the building which meant we were able to use exposed slabs with active chilled beams. This minimised floor to ceiling heights which in turn enabled us to take an entire floor off the height of the building which certainly helped in planning and conservation terms. So solar shading is critical throughout the building. In fact, it’s the only principle that links the two elevations.”

The street elevation encases the teaching wing of the building but most of the laboratories are located across the atrium in the opposite block which is west facing. Therefore solar control is an even greater requirement here and this is dramatically expressed on the building’s west elevation.

Unlike the east street elevation, the west faces away from the city and directly into the university campus across a fine, newly installed public square created as part of the development. Therefore it was not bound by the onerous conservation constraints operating on the other side, a liberty which the architecture has ravenously embraced.

The entire western block is sheathed behind extraordinary full-height aluminium armour that wraps and ripples across the facade like a giant metallic wave. Radically, the giant 1.5 m diameter ducts that serve the heavily serviced laboratories are located outside the building insulation line and are expressed as bulbous shafts ribbed across the facade.

Interwoven between these are three levels of window openings. But mindful of Adrill’s earlier pronouncements on the dangers of natural light in hyper-controlled laboratory environments, the windows are cast deep within recesses framed by the curvature of the adjacent duct shafts. 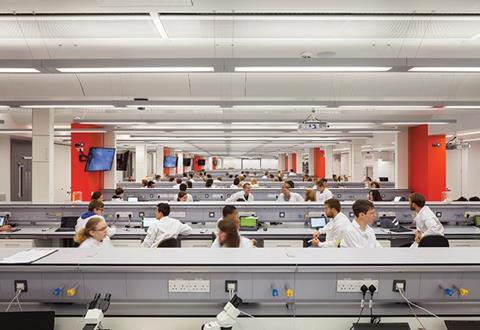 To further mitigate sunlight, they are also shielded by curved, perforated aluminium panels that appear as swollen, miniaturised inversions of the hulking ducts by which they are being squeezed on either side. Adrill proudly points out that these frameless, curved window veils attain their rigidity “not through a frame but by the simple condition of their curving form”.

The overall effect is astonishing. The building appears avowedly industrial and machine-like, the perfect mechanical demonstration of the complex scientific activities that take place within. On closer inspection, the joints of individual cladding panels becomes clearer and may well imbue the building with a cruder, clunkier sense of almost post-modern artifice. The effect may be striking but it is hardly subtle.

But the dramatic power of the facade as an overall composition, particularly when viewed from afar, is undeniable. As is the sheer level of difference between it and the now even more sober street elevation. The suppression of windows necessary for the building’s internal function could well have led to the kind of blank, lifeless and sterile facade so evident in some of the other buildings that have an equal disdain for natural light, such as factories or department stores.

But, like the Georgians who also appreciated the compositional value of a false window, the architect here has employed all the tricks of depth, surface, void and rhythm to sculpturally and dramatically craft interest and animation from what is to all intents and purposes, a blank elevation.

The building’s exterior split personality is less rigorously enforced internally. Inside the principal volume is the full-height atrium which separates the laboratory and teaching blocks on either side and features a staircase on its east side. The atrium itself is a cavernous volume flooded with natural daylight from its glazed north-south aspect and roof lights above. While its angular steel finishes and exposed concrete columns present a corporate feel, the splash of colour applied to the lift shaft as well as the glass study “pods” inserted opposite the staircase add welcome warmer flourishes.

The labs themselves are compact, practical spaces which have the flexibility to allow for multiple layouts and configurations, a key client request. While all the interiors are marked by crisp efficiency and can also accommodate larger future capacity, it is still the bold split-elevation approach that remains the building’s principal design legacy. Does it work? In this instance, yes because the divergent facades are not autonomous masks applied onto a single building, but are an expression of the differing functions of each wing studiously moulded into an appropriate contextual response. 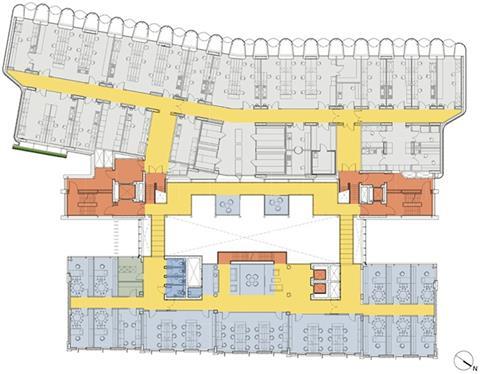