The UK goes to the polls on 7 May 2015, but political parties will be forming their policies from now. So it is the time for the construction industry to tell the politicians what it needs to be able to thrive 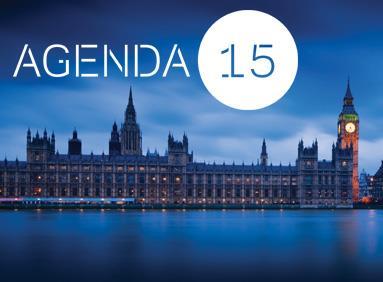 The construction industry, which accounts for 7-10% of GDP, has always been a major contributor to the UK economy. Today, as the country begins to recover from five years of downturn and recession, the construction sector - and housebuilding in particular - is more crucial than ever to the UK’s economic fortunes. As a result, the sector is now a focal point of national political debate. And yet for many in the industry it often feels like construction - compared with, say, the car industry or pharmaceuticals - is a Cinderella sector: not invited to the top table when it comes to influencing the national political agenda.

While the likes of business secretary Vince Cable talk enthusiastically about supporting the UK car industry, because of the focused lobbying from that sector’s whole supply chain, the construction sector is given less focus despite being more than twice the size. So while 2013 saw significant victories for construction from government actions, such as the introduction of much-improved equity loans system under the Help to Buy scheme, it also saw continued and dangerous backtracking on vital policies to support green growth.

Thanks to the coalition innovation of fixed-term parliaments, for the first time we know exactly when the next election will be - 7 May 2015 has already been picked. This means that there is a clear timetable for formulation of the ideas and innovations that will go into the main political parties’ manifestos.

The construction sector has exactly 17 months to secure the kind of influence on the next government that could make a real difference to the sector in the coming years. With the first year of an administration notoriously seen as the best point to introduce radical change, and those policies based on the parties’ pre-election manifestos, now is the moment for the industry to make its points to the political parties plainly and persuasively.

With this in mind, Building is this week launching Agenda 15. This major editorial initiative is an attempt to corral the most important issues, ideas and innovations the industry can muster, and to pull together a whole-industry manifesto for construction in advance of the next election.

As has previously been debated in these pages, the bodies representing the different parts of the construction industry do a good job representing their members’ specific interests, but the industry still lacks a coherent, unified body to act as the single voice at a political level.

As an independent magazine which has to be able to criticise and scrutinise the sector, Building does not purport to offer that voice. But we believe the magazine can play a role in bringing construction together to influence the public debate at this most important time for the industry.

The first part of Agenda 15 will be to gather the views of the sector through the launch of what we hope will be one of the widest consultations ever undertaken in the industry. Below are six questions we would like everyone who works in this sector to consider and respond to. This initial consultation will last three months, with early findings to be presented at the Ecobuild conference in March.

From there, Building will use its traditional campaigning journalism to highlight the policy issues that most affect the industry you all work in. There will be hustings with senior political figures, debates and all the coverage of the big issues you’d expect.

Later in the year Building will unveil the process through which this will be turned into a single manifesto, in time for the first issue of the year in 2015, with which we will lobby politicians in the run up to the election.

Agenda 15 will build on the momentum generated by our Green for Growth campaign, but will look more widely than sustainability issues, to cover everything from planning to procurement, from payment to pipelines.

This isn’t about backing particular political parties, but instead about drawing up the policy ideas that will help the sector and the UK - and taking them to the politicians before what looks set to be the most open general election in recent memory. 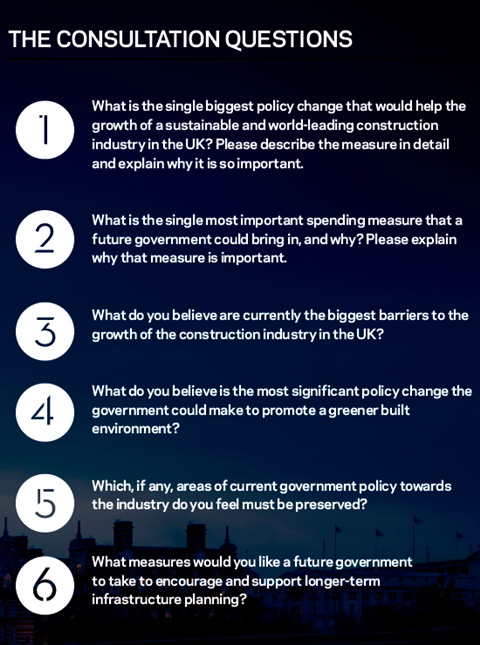 As the sector’s leading publication we are committed to transparency and openness, but we appreciate that not all respondents may wish for their views to be aired publicly. So please indicate whether or not you are happy for your response to be made public. Those that are will be published in a special area of our website for others to see and comment on.

In addition to answering the questions, please add any further thoughts you wish us to consider, and contact our editorial team with ideas for issues you think need highlighting.

The government and construction industry have together articulated a vision for the next decade with the industrial strategy Construction 2025. Building is asking readers to suggest the policy changes that are now needed to get the industry there.

In the box above are six questions, which we are asking readers to respond to, and you are encouraged to consider the questions as widely as possible. Areas you may wish to cover include: specific recommendations for government capital spending; procurement policy; building regulations policy; planning policy; housing policy; local government financing powers; sustainability policy; energy policy; and small business policy.