Can the Olympics save their jobs? 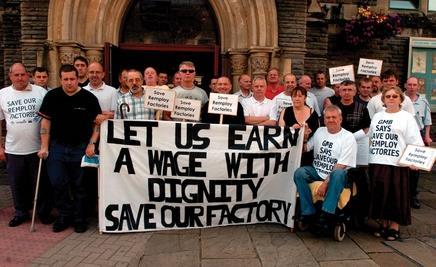 Furniture supplier Remploy needs to save £227m and is planning to shut 32 of its factories – a move that the TUC says would spell disaster for its largely disabled workforce. Now there’s hope that orders for seating for Olympic venues could provide a lifeline.

It’s all about bums on seats. This weekend at the TUC conference in Brighton, a group of disabled workers will engage in a last-ditch attempt to halt a series of factory closures that will, they say, put their jobs at risk, and deal a further blow to the UK’s supply of stadium seating. They intend to take their protest to this autumn’s party conferences in the hope of garnering political support – though in reality it is the Olympics that is more likely to come to their rescue.

The workers, from ailing manufacturing organisation Remploy, are facing the loss of almost half their factories as managers respond to government pressure to cut costs. Set up at the end of the Second World War to provide work opportunities for disabled people, Remploy has grown into one of the UK’s manufacturing giants, particularly in the furniture and seating arenas. It has more than 12,000 employees and has supplied furniture to more than 13,000 schools and colleges in the past three years.

Now, however, £227m over its funding budget, Remploy is proposing to close 32 of its 83 sites nationwide and merge a further 11. Despite Remploy’s assurances that no disabled person will be made compulsorily redundant during the restructuring – which will still leave 40 operational factories – the unions have hit out at the planned closures.

Brendan Barber, general secretary at the TUC, says: “A combination of employer prejudice and a lack of suitable jobs means many Remploy employees will struggle to find new jobs. Unions will throw their weight behind a campaign to fight the closures.”

Remploy counters that the unions’ interest is only in maintaining loss-making factories which cost the taxpayer millions of pounds each year. Following a review of Remploy, the government has set it two targets: to significantly increase the 5,000 people a year it supports in mainstream employment, and to stay within a funding limit of £555m over five years – the cost of running Remploy in its current form over the next five years has been projected at £782m. To achieve these targets, Remploy plans to downsize its manufacturing operations in favour of preparing people for work in mainstream employment.

The organisation has calculated that the average cost of supporting a factory employee over a year is £26,600, whereas supporting a person entering mainstream employment has a one-off cost of £5,300. This means that by downsizing its factory workload, it would be meeting both government targets at once. “Our modernisation proposals mean that within five years Remploy will quadruple the number of jobs we find for disabled people – that is 20,000 jobs each and every year,” says Bob Warner, Remploy chief executive.

And he denies there is a lack of suitable jobs: “With the right training, job preparation and support, almost all of our employees can work in other companies, and we are already talking to charities and social organisations to find meaningful work.”

Nevertheless the factory closures remain highly controversial and Remploy has bowed to union pressure and extended the consultation period to October – just enough time for the organisation’s employees, backed by the unions, to appeal to political opinion at those party conferences.

There could be another cause for hope for opponents of the factory closures. Building has learned that Remploy is in the early stages of talks with contractors over work on the Olympics. This could include seating on the event’s stadium and other venues.

Remploy’s involvement would also relieve shortfalls in the private sector. With a host of major buildings – including the main stadium, other sports venues and the media centre – to be built over the next five years, the industry is expected to be stretched to breaking point. Now, the organisation’s backers are calling on the Olympic Delivery Authority (ODA), with its much-publicised commitment to equal opportunities, to step in to champion Remploy’s cause.

Many union figures believe contracts on Olympic venues would give Remploy the forward workload it needs to reduce the number of factory closures, safeguarding the employment of many disabled workers. Senior Remploy sources said it was too early to say whether this would happen, but one said: “The issue is whether this would be giving a new volume of work or replacing contracts which are already there.”

Graham Hirst, sales and marketing manager for Remploy furniture, confirmed this week that the organisation was in discussions over work on the Olympic build programme. “We are not at a stage to submit formal bids, as it’s too early for that, but we are talking to a number of contractors about potential involvement.”

It is understood that one scheme under discussion would involve converting a college into temporary accommodation for the Games. This start point is not surprising, given that education is one of Remploy’s main markets. Specialising in school seating, the company has carried out major fit-outs and refurbishments of schools across the country.

The company also has experience of adapting its products to stadiums. Six years ago it made seats for Ibrox stadium, the 51,100-seat home of Glasgow Rangers.

Remploy’s pedigree for involvement with the Olympics is boosted by the fact that it has relationships with several large contractors. These were established mainly through its schools work with clients such as HBG and Skanska. Hirst says any encouragement by the ODA for contractors to use Remploy would be welcome.

Union representatives go further, arguing that as a public sector client, the ODA has a duty to promote the use of Remploy. Jenny Formby, a national officer at the T&G and chair of the Remploy trade union, says: “Currently 2.4p in every £100 of public procurement spending goes to Remploy. We’re saying that all it would take is 5p in every £100 for a much more viable future.” Office of Government Commerce rules dictate that “sheltered manufacturers” such as Remploy should be considered for public sector contracts wherever possible, but research from the GMB union shows that Remploy secures just £32m of orders from a total public spend of £136bn per year on goods and services.

The equality case for Remploy

A strong incentive for the ODA to use Remploy for work on Olympic venues is that it would enable it to demonstrate its commitment to equal opportunities. In its equality and diversity policy it says: “We will work with partners to encourage disabled people to train for professions and apply for jobs where they have traditionally been under-represented. We wish to be a model of good practice in equality and diversity…”

Bob Blackman, national officer of the Unite-T&G union, says: “Sometimes it can be difficult to integrate large numbers of disabled people on site, but this provides the opportunity for the workers to be involved in off-site manufacture.”

The ODA might also have an eye on the capacity of the UK’s seating industry. Last year when the original seating contractor for Wembley, Stadium Seating, went into administration, its contract was taken over by Pel, the firm that was employing it. Pel Stadium Seating then went into administration itself, and main contractor Multiplex concluded that the most viable option was to buy Pel’s remaining seats and install them itself.

With two of the UK’s suppliers of stadium seating suddenly out of the picture, can Olympic contractors really afford to leave Remploy’s workers on the bench?

The history of Remploy

Remploy was set up after the Second World War to provide employment opportunities for disabled people, particularly those who had been injured in the war.

The organisation, which is subsidised by government funding, was set up by Ernest Bevin, then the minister of labour, under the 1944 Disabled Persons (Employment) Act. The first factory, making furniture and violins, opened in Bridgend, South Wales, in 1946. Many of the workers were disabled ex-miners.

Remploy went on to develop a factory network throughout the UK. It now operates in a number of sectors, including the manufacture of seating and school furniture, motor components and chemical, biological and nuclear protection suits for police and the military.

In the late 1980s, with a change in society’s attitudes towards disabled people, and an increasing desire among disabled people to work in mainstream environments, Remploy expanded its activities to help disabled people find work with other companies.

Today, Remploy operates 10 manufacturing and services businesses from its network of factories. It provides work opportunities for those with physical disabilities, learning difficulties and mental health issues.

Last year it also found work in external organisations for 5,000 disabled people and aims to increase this figure to 20,000 a year in 2012.

For more on the Olympics, go to www.building.co.uk/2012