Car park of the future 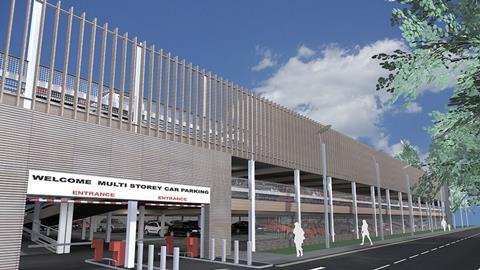 A timber-frame, zero carbon car park. You’ve got to be kidding?

Timber-frame buildings have made rapid progress in many construction sectors including the residential and commercial markets. But one application for which timber-frame construction has never appeared naturally suited is car parks. And much less multi-storey car parks. Until now.

Bourne Construction Engineering, through their subsidiary Bourne Parking; has recently unveiled a prototype of a radical new timber-frame car parking model in Poole, Dorset. EcoDex is the UK’s first carbon zero car park and it is made almost entirely from sustainable timber glulam construction. Although the two-storey, 100-spaces prototype uses steel columns, the designers insist that these could easily be replaced by timber. Additionally, the system can accommodate a maximum of up to four storeys.

EcoDex provides all the benefits of glulam and timber mixed with the strength and speed of steel. It’s quicker to construct than traditional alternatives

The prototype employs lightweight, modular construction. Its primary supporting frame is arranged on a standard layout with structural columns set out in a 16.8m x 4m grid and primary support glulam beams spanning up to 16m. These primary beams support suspended timber floor decks which contain pre-fixed drainage elements, lighting and services and a pre-finished hard-wearing surface course already applied. These pre-fabricated decks are manufactured off-site and delivered as pre-assembled units before being fixed to the primary glulam structure.

Terry Wood, business development director at Bourne is keen to stress the scheme’s considerable technical, commercial and environmental benefits. “EcoDex provides all the benefits of glulam and timber mixed with the strength and speed of steel. It’s quicker to construct than traditional alternatives with typical programme savings, depending on the nature of the individual project, in excess of 50%. Also, as the system is extremely light weight in comparison with say a standard concrete car park there are also large cost savings in the provision of the foundations with foundation costs typically reduce 25%-40%.”

Wood also points out that the use of Building Information Modelling (BIM) technology and a “highly specialised standard kit of parts capable of being expanded or reduced to meet specific site requirements” can also reduce lead-in time to site “by around 25%.” Neither does Wood consider the use of stamndardisation to be a constraint pointing out that “all varieties of car park layout are still possible using the EcoDex system, whether the floor plates are flat, split level or circulation modules.”

Wood even stresses the aesthetic benefits of the EcoDex system over traditional concrete car parks referring to the “soft and natural finish of the exposed downstand glulam beams” being preferable to the “uninterrupted flat soffits of a more archetypal concrete finish.” 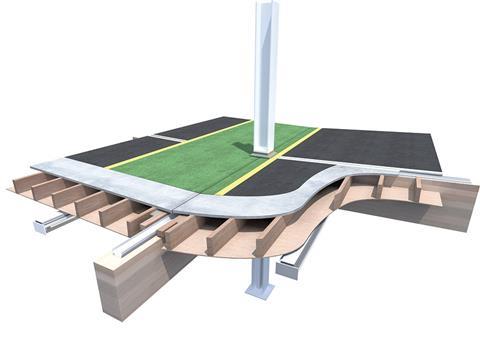 The EcoDex timber flooring deck is supported by glulam primary beams and contains pre-fixed drainage, lighting and services elements all finished by a hard-wearing surface course

What about fire hazards?

In the minds of many, fire protection and prevention is a perennial concern when it comes to timber buildings and it is one whose seriousness is potentially elevated when dealing with a car park and the multiple combustive risks therein. But this too is a challenge that Bourne claim to have rigorously addressed. “Timber is actually noted for its inherent ability to withstand the effect of fire” explains Wood, due to its “having the unique property of forming a charcoal layer on its surface and then slowing down the rate of burning.”

In practice, this principle is exercised at EcoDex by the adoption of a “sacrificial timber” approach. This involves checking the dimensions of the residual sections of timber members after charring are sufficiently large to support the loads and specified deflections within the specified period of fire resistance.

Wood explains that this approach has been used on all “exposed structural timber elements and composites” and that the requirements for fire resistance have been assessed in accordance with EC5-1-2 design requirements. By so doing, Wood insists that under fire conditions, the mechanical resistance of all structural assemblies and members is assured and that the “sacrificial” approach enables the timber to “retain its strength and shape for a considerable period during a fire.” 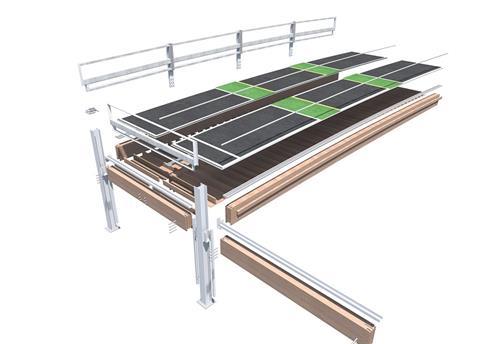 It is not just Bourne which is keen to point out the environmental benefits of their EcoDex system. Sustainability assessors Sustain have also been engaged to provide independent analysis and its report was overwhelmingly positive. Not only did it concur with Bourne’s findings regarding the speed of construction and the advantages of its lightweight, modular construction but it also went on to claim that not only did the prototype reduce carbon by 6,000kgCO2 per car parking space but that it is actually “carbon beneficial for the first 30 years of its lifetime”. This projection has been determined by the need to renew the decking surface after 30 years. However, Sustain principal associate Dr Craig Jones predicts that by that point, technology may have advanced sufficiently to provide a surface that does not require renewal thereby rendering EcoDex carbon beneficial indefinitely.

So why did Bourne spend time, money and effort developing EcoDex in the first place when the traditional car park model appears so established? As Wood explains “the drivers for the system were both commercial and environmental. We identified that there was a need, drive and desire by the retail, commercial, rail and general construction sectors to reduce their carbon footprint. This provided a clear opportunity to manufacture and erect the world’s first zero carbon multi-storey car park and we are confident that there remains a good commercial market for it.”

Bourne’s confidence is certainly matched by the level of innovation in the EcoDex prototype. Whether it catches on commercially remains to be seen. But what is clear already is growing sustainability awareness across the industry has added yet another building type to the ever expanding market for timber-frame.construction.