Our round-up of the latest solutions includes curtain walling for guide dogs, a flagship regeneration project in suburban Surrey and a cover-up at the Scottish Crime Campus… 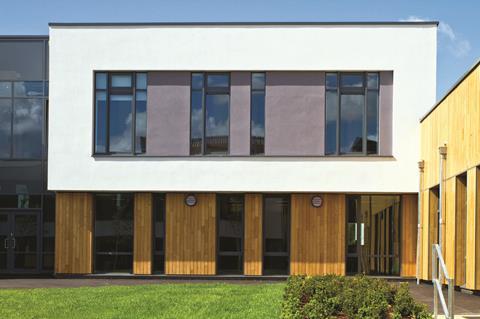 PVCu cladding from Swish Building Products has been used to replace timber cladding in a residential refurbishment carried out by Newham council in east London. The Open V cladding was chosen in addition to 50mm wall insulation to improve the thermal insulation of the sixties prefabricated houses. A breathable vertical membrane was fitted behind the cladding to deter moisture build-up while ventilation grills were installed at roof and ground level to ensure a continuous and clear air path through the cavity.

Insulated panels from Kingspan Benchmark have been used in the £2.3m refurbishment of Balaam House, a sixties tower block in Sutton, Surrey. Architect Lewan Somachandra from Baily Garner chose Benchmark’s Evolution Axis because the range of detailing options allowed for a “distinctive design, which will act as a beacon for regeneration in the area”. The panels are able to achieve U-values as low as 0.13W/m2K and their insulation cores are rated A+ in the Green Guide to Specification. The company says the panels contain no CFCs or HCFCs. The panels are insurer-approved by the Loss Prevention Certification Board, and both internal and external panel faces have a class O fire rating in accordance with the Building Regulations. 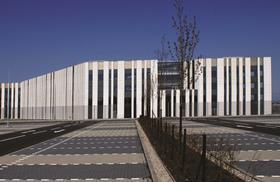 Architectural aluminium systems manufacturer Metal Technology has supplied curtain walling and louvres on the new Scottish Crime Campus at Gartcosh, Glasgow. Working with fabricator CMS Enviro Systems, Metal Technology designed a bespoke louvre blade to achieve the architectural team’s desired aesthetic. This new blade, fulfilling the differing demands of weathering and ventilation, was approved, extruded and supplied to site in line with the timescales on the project.

Carea has added several finishes and colours to its Aquila range of composite mineral cladding panels. The company says that the panels are suitable for new-build and refurbishment applications. The system is available with an insulated backing in a range of thicknesses from 40mm to 120mm. The outer cladding panel is either 3mm or 5mm thick to suit different building upgrade requirements. The panels come in a choice of four different finishes: Carvi, Dune, Pixel and Smooth. They are also available in four new grey colour shades, adding to the existing 36 colours of the Aquila range. The panels come in the following sizes: 600 x 1,200mm, 600 x 600mm, 600 x 300mm or 350 x 600mm.

Nvelope Rainscreen Systems has launched a range of vertical and horizontal cladding support systems. The company says the system allows facades to be installed with no visible fixing. Called NV Vertical and NH Horizontal brackets, the system is suitable for fixing different types of panel including high-pressure laminate (HPL), timber, weatherboard and fibre cement. The brackets are available in a range of depths ranging from 40mm to 300mm for the vertical range and 70mm to 300mm for the horizontal range. The Nvelope T and L profiles are secured using support brackets, which are connected through a series of fixed and flexible points - an arrangement that enables absorption of wind loading while also allowing for expansion and contraction in the structure.

Aluminium facade company Wincona has launched a new range of casement windows. Wicline Evo uses a single system with common components to achieve a range of opening and design configurations. The company says the system allows specifiers to realise complex window designs. There are options for enhanced security, bullet and burglar resistance, thermal and weather performance, acoustic protection, open-in and open-out systems, and a range of window fittings.