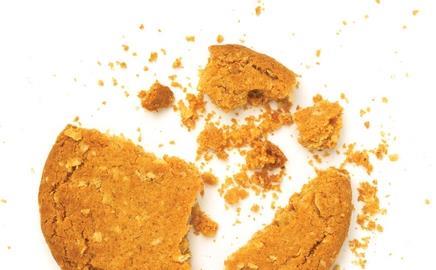 Your wallet may feel a bit light right now, but that’s just the way things are sometimes. Cheer up, put on a cuppa and mull over Guy Browning’s creative economies, starting with …

Biscuits are the fuel that keeps the industry ticking, so don’t make the mistake of banning them altogether. You can still have an approach to biscuits that reduces costs without damaging staff motivation. Phasing out cream biscuits is an obvious first move: a ginger crunch cream costs about double the standard ginger nut. It’s less of a luxury, certainly, but actually better for dunking. You might also want to explore the coconut ring, which is exceptionally good value, possibly because instead of a cream centre, it has a hole.

Let’s face it, building materials aren’t cheap. Bricks, steel, tiles and copper aren’t getting any more affordable. So, why use these expensive materials when others are equally good and totally free? Wattle and daub served us well for hundreds of years, so start by bringing that back. Simply throw some mud and sticks in the back of your pick-up on your way to work and you can build your own rugged, weatherproof walls to well over three foot high. For larger projects, why not try Weetabix? Anybody with young children knows that when mixed with milk and left to dry, it has the load-bearing capacity of reinforced steel. For smaller projects, Duplo is an option. You can pick up basketfuls at boot sales for next to nothing. This will make later conversions a doddle.

One, two, skip a few

Buildings projects are complex, but they also provide opportunities for economising. For example, when it comes to towers, you can be certain nobody keeps track of the floors. Simply miss out a couple, especially towards the top where even if someone was paying attention, they’d have probably lost count. Miss out floor 13, as nobody’s keen on that one anyway. This will mean floor 12 has very high ceilings, but it will give a much lighter, grander feel. It’s the same story (forgive the pun) with bridges. Do the chains holding up suspension bridges really need to be that fat? Slimming them down will put the “suspense” back into suspension.

Crane in the neck

When a big building project is under way, cranes appear on the skyline, but do we really need them? Did the Egyptians use them to build pyramids? No! And if they didn’t need them to build the Great Pyramid of Giza, do we need them for the small supermarket of Swindon? I think not. Use ramps instead and haul everything you need to the top. This will also make the journey back down more fun. For a bit of extra cash, consider charging parents for letting their kids use your site as a playground. Warehouse play centres, which involve climbing, sliding and general mucking about, are extremely popular, and building sites are tailor-made for this kind of entertainment.

Construction is a tricky business and the people who work in the industry are highly skilled. Training is a vital part of this, but sadly is often pricy. On-the-job training is far more cost-effective. This could comprise “lessons learned the hard way” modules, accompanied almost immediately afterwards by first-aid modules. Britain is famous for its creativity and this would be boosted by brickies, chippies, architects and engineers making it up as they went along without the burden of any kind of standards, procedures or professionalism. Think of the savings.

Preparing tenders is exhausting and expensive. Sometimes it feels as if it doesn’t really matter what you put in a bid, as the winner’s already been decided. You can save thousands by refusing to go through with this process. Instead, simply shout, “Chase me!” and run off. If your clients really want you to build something, they’ll come running after you. If they don’t, then they’re really not the sort of clients you’d want to have anyway.

Environmental concerns are uppermost in the average employee’s mind, though perhaps slightly below beer. If you ask environmental experts (and there are millions upon millions of them) to closely oversee everything we do right down to the way we carry cement to the top of buildings and stir our tea, soon we should be able to let them take over entirely and build in a way that would be totally organic for them and much cheaper for us.

Nobody would dispute that architects’ drawings are things of beauty, but let’s be honest – do we need to pay for that much detail? We’re all grown-ups and don’t need to be told how to do every little thing. Improvise! That’s how great breakthroughs are made. If things don’t fit together exactly, don’t get too wound up. It may well have a more relevant, contemporary, open-air feel. Most great ideas have been jotted down on the back of an envelope and there’s no reason why major construction projects should be any different. Just have a rough notion of what you’re doing and then start pouring the concrete. Relax!