What do you get when you turn a 19th-century bullring into a 21st-century shopping centre? A theatrical melding of Spain’s cultural past and present 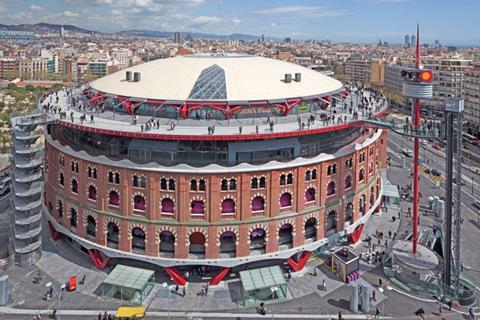 What do you do with a crumbling, disused 19th-century Barcelona bullring that has not been in constant use since the seventies but remains a major architectural landmark and civic symbol?

Demolition, while commercially and financially attractive, is culturally untenable.

Fossilisation, or the “Battersea Power Station option”, retains the most visible architectural elements but condemns the building to an uncertain future of dysfunctional oblivion, which might be occasionally punctuated by futile attempts at redevelopment.

But this is no trite exercise in conservation. While the bullring’s main facade has been lovingly restored, its innards have been ripped out and replaced with a 105,816m2 shopping and entertainment centre. This contains 110 shops, a 12-screen multiplex cinema, a museum, a gym, parking for 1,250 cars and five basement levels - all squeezed within the existing circular drum. A new 5,500m2 office block has also been built beside the main building.

The scheme also survived the bankruptcy of the original client at the height of the recession, a nine-month construction hiatus and the appointment of a new client. But its key interest remains in how the design addresses three core challenges presented by the project.

First, a structural solution was required that retained the existing facade but was independent from it. Second, the new architecture had to be sympathetic to the old but retain an integrity and identity all of its own. Finally, it was essential to secure a viable commercial and civic future for a derelict but revered historic building.

Las Arenas sits on the northern edge of the Plaça d’Espanya, a bustling intersection fronted by an eclectic mix of neo-classical monuments and modern office blocks. Las Arenas itself was constructed between 1898 and 1900 as Barcelona’s premier bullring, with a capacity of 14,000. It was built in the exotic Neo-Mudéjar style, a highly ornamental revival of Moorish architecture applied to bullrings and public buildings throughout late 19th-century Spain.

However, following the construction of the larger, 20,000 capacity La Monumental bullring in 1914, Las Arenas was relegated to second place. Its final bullfight was held in 1977 and thus began its long, slow decline. The building did not close entirely - like Battersea Power Station it continued to be used as an occasional venue for a disparate range of public entertainments, ranging from boxing to rock concerts. But by the time RSHP was appointed to redevelop the site in 2000, the deterioration of its physical fabric was in an advanced state.

Total demolition was never an option. Although the building was never listed, such was the strength of local affection in which it was held that authorities had insisted the facade should be retained. Bullrings in Spain form a powerful expression of cultural identity but bullfighting itself is often a divisive political issue. Catalonia plans to ban bullfighting entirely next year. So whatever future development plans were proposed for Las Arenas, its days as a bullring were over.

The shopping and leisure centre proposal was ambitious for a number of reasons. Large shopping centres are relatively rare in Barcelona and the Catalan government imposes harsh planning restrictions that prevent the sprawl of mega-malls and protect urban concentrations of “high-street” retail activity. Also, the client had requested one full level dedicated to leisure and cultural uses and another capable of holding public events with a capacity of 3,000, both of which should be free of structure.

Diagrammatically, RSHP’s concept is seductively simple and contains four principal elements. The first is the retained facade, structurally independent from the rest of the building and supported by a new bottom storey of composite concrete arches that are clamped onto either side. These are supported by brightly coloured raked columns. When Las Arenas was built, this lower storey was occupied by various ramps, steps and ancillary structures located around the stadium including, morbidly, a dedicated hospital and chapel.

By clearing these away, dropping the entrance level of the building and inserting shop frontages between the arches, the new scheme creates an active new public space which, crucially, is at the same level as the streets and spaces around it, skillfully embedding the development into its surrounding public realm.

The second element is a new inner building that is set back from the historic facade and split into four quadrants. The quadrants contain the shops and the cinemas while the cruciform voids in between are occupied by multi-storey atriums. These four atriums plug into the main facade to form entrances surrounding a central “event” space. The perimeter void between the quadrants and retained facade is filled with plant and services and a full-length running track for the gym on the penultimate level.

The third element is unquestionably the most dramatic. In order to satisfy the client’s request for structure-free levels, a 100m diameter steel “dish” the diameter of the building has been built over the quadrants and retained outer wall and is supported by four gigantic pylons positioned in each atrium. These in turn sit on massive, exposed, elliptical concrete columns that plunge deep into the basement levels below. As the pylons essentially form a secondary, self-supporting steel structure, they enable two levels of column-free space to be located below and above the dish.

The space above the dish is the fourth and final element. The outer edge forms the roof-top public plaza, complete with bars and restaurants and offering panoramic views of the city. It is accessed either by escalators running through the central atrium or a detached glass lift tower.

Below a 10m-high semi-glazed dome at the centre of the dish is a space to hold public events. Its roof is composed of latticed laminated exposed timber beams and clad in a beige plastic coating to reduce solar glare.

RSHP is a practice that prides itself on structural expressionism and diagrammatic legibility - both are on display at Las Arenas. Externally, the exquisitely restored brickwork facade, complete with romantic horseshoe arches and gleaming ceramic tiles, undoubtedly restores the building’s historic credentials. Even the new dome could almost be mistaken for an original component.

But this is an architecture forged not by historic deference but by astonishing structural ingenuity. And it is this core structural concept that informs every single spatial, elevational, circulatory and tectonic component in the building.

The monumental pylons that swoop up the atriums visibly express the role they play in supporting the upper levels of the complex. The exposed soffits of the new ground floor concrete arches proudly display the vice-like grip in which they hold the retained outer wall above.

The 20 steel “boomerang” columns ribbed around the 3m-high base of the dome express the huge lateral forces its shallow profile creates. And the glorious rooftop plaza, its slender profile tantalisingly cantilevered over the historic facade, provides an elegant, momentary glimpse of the dynamism within.

It is these bold structural elements that give Las Arenas its distinctive new identity while retaining its historic character.

Inevitably, despite the simplicity of the concept, there were major challenges on the scheme. James Leathem, the project architect, identifies the principal one as being “the constraints of building within and below an existing building and retaining a historic facade.” Fire authorities also exerted onerous requirements, resulting in scissor escape staircases and the installation of an incongruous pipework sprinkler system below the timber elements in the dome.

The change of client and hiatus in construction prompted by the recession also meant that the last 20% of the building was primarily completed under the supervision
of the local co-architect. Although no conspicuous break in design continuity is apparent, certain fit-out elements, such as the crudely fixed light fittings at the base of the pylons and the relative lack of connectivity between the dome space and the restaurants and public promenade surrounding it, are unfortunate.

But Las Arenas is not a building defined by its constituent parts alone. It is the strength and purity of its structural diagram that gives the building unity, character and conviction. Add to this a generous approach to public realm, particularly evident in the superb rooftop public space and the development becomes a heroic exercise in civic renewal.

Las Arenas has a final ironic twist. With its jazzy, Moorish facade, strident colours, oversized structure and inhabited roof, it has all the sculpted melodrama of a giant Hollywood stage set, charged with a surreal and cinematic sense of artifice. In its pursuit of structural honesty, RSHP may well have elevated one of the most prosaic of all building types - a shopping centre - into its most theatrical work to date.