Done to a turn 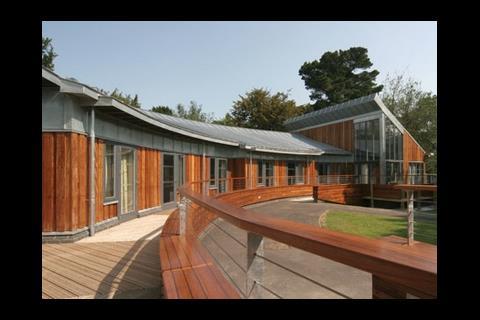 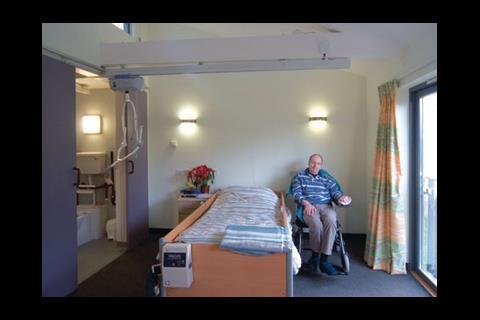 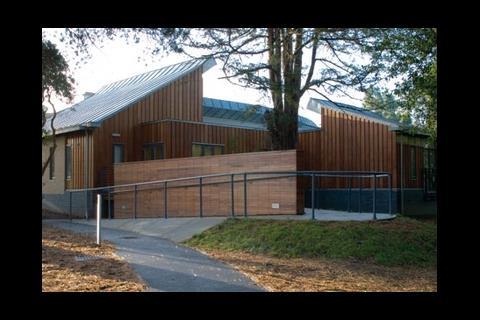 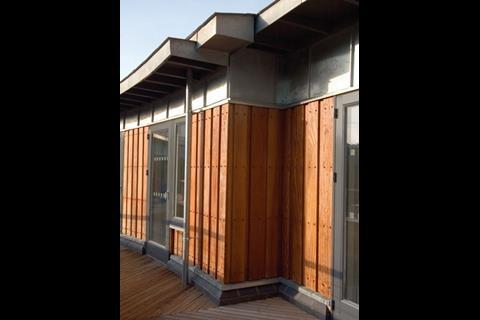 Architect Clague’s curvaceous extension to the Strode Park Foundation brings something that most housing for disabled people has never even heard of – glamour.

Just how plodding, dumpy, soulless and oppressive can disabled accommodation get? For the best of reasons, housing for people with physical disabilities is dictated by the technical requirements and spatial dimensions of their mobility needs. The terrible, if unintentional, irony is that the architecture all too often ends up lampooning the physical restrictions of the residents it serves.

A case in point is the Strode Park Foundation outside Herne Bay in north-east Kent. In the 1970s, boxy, characterless, single-storey extensions were attached to a Victorian mansion. Even the classical facade of the mansion is smeared with a dirty grey render.

In 2000, yet another boxy extension was lined up for development and had planning approval in the bag. But this time Paul Montgomery, the foundation’s new chief executive, got cold feet and started afresh with a different architect: Clague of Canterbury.

Why the change of plan? Montgomery had a vision of the new wing being a “re-ability centre”, where patients disabled by an accident or stroke would be helped to regain self-sufficiency through various neuro- and physio-therapies.

It was an inspired move. Clague’s £1.1m extension injects rare glamour and a debonair character to disabled accommodation. The new single-storey wing finishes off the prosaic rag-bag of existing buildings with a sweeping flourish. Its crescent form is faced in chunky iroko boarding in a rich mahogany tone, and it ends in an emphatic bookend made of a pair of steep monopitch zinc roofs. Both externally and internally, it is uplifting and thoroughly non-institutional, and contributes to the therapy of its residents.

To achieve such architectural distinction, Clague had to turn several design constraints to advantage. The 15 intended residents of the wing were, for the most part, paralysed and would have to rely on a battery of hoists, wheelchairs, adjustable beds and disabled bathroom equipment, not to mention carers. Next, the dumpy existing wings lowered the architectural tone of the site. On top of that, wheelchair access dictated that the new wing would have to be monotonously level with the existing complex, even though the ground fell away at that point. Then there was a call for drastic value-engineering to slash the tender sum by 19% (see “Wow factor” factfile).

The only inspiring thing about the site was the park of mature trees surrounding the building, but even this asset turned out to be a constraint: most of the trees, even a scruffy holly bush bereft of berries, were protected by preservation orders.

Clague appeared to be stuck. It couldn’t stack floors because the extension needed to be wheelchair accessible, nor could it spread out the building willy-nilly because of those pesky trees. But that’s what inspired the building’s distinctive crescent shape. As Clague director Andrew Wittich explains, it had to twist round to fit between the existing building and two of the trees. Even the obstinate holly bush forced two rooms to be dropped from the brief and the curvature to be made more acute.

The crescent wing comes with a low-pitched zinc roof so that it nestles beneath the backdrop of mature trees. Along its front facade, it is bordered by a boarded terrace on to which the bedrooms open through french doors. As the land falls away, the terrace is raised up on concrete stilts that add to the sculptural quality of the monopitched bookend. And beyond the terrace balustrading, the crescent embraces a grassy sun-trap with a sculptural centrepiece.

The wing is clad in natural materials that are warm, tactile and attractively detailed. Light-grey standing-seam zinc sheet has been used to cover the pitched roofs. The eaves and upper leading edges of the monopitches all have deep oversails that add to the modelling. And the external walls are faced in iroko hardwood in vertical planks, arranged in Scandinavian board-on-board fashion and finished in Danish oil to enhance their grain.

Despite its crescent shape, the wing has a basic internal layout of rooms strung out along either side of a central corridor. But its roof form has been articulated, both to keep the roof profile low and to give a light and airy feel to the interiors. The two roof pitches along the front and back of the crescent have been separated by a lower stretch of roof over the bathrooms and central corridor. This allows the habitable rooms to open up into the monopitch roof spaces that slope up from the perimeter eaves. As well as giving them more breathing space, the monopitches introduce high-level clerestory windows on the inner, corridor side that double the daylight admitted to the rooms.

On its outside wall, each room comes with french doors and a separate window that give unobstructed views out from the bed to surrounding park, trees and changing sky. “Residents can feel close to nature and the outside world without having to venture too far from their bedrooms,” says Wittich.

The bedrooms all come with en-suite bathrooms and a full battery of mobility aids. The key mobility aid is a hoist that is suspended from a high-level track and links the bed to the toilet and shower. Here again, neat detailing has reduced the visual intrusion of the machines. The bathroom door is split into two leaves that slide apart to make way for the hoist.

“Everything I want is here,” enthuses Bill Barnes, who is paralysed after two strokes. “The room is lovely – its size, lighting, facilities and the views outside.”

As well as the 15 bedrooms, the new wing includes two large common rooms. One is a lounge-diner, the other a lofty, brightly lit quiet room that occupies the double-height space of the monopitched book end.

Where the roof drops down over the central corridor, it incorporates a series of rooflights that funnel in daylight and glimpses of the trees. The corridor’s curve makes it more agreeable. As John Cotterill, Strode Park’s head of care, points out: “In a care home, a long straight corridor is bad news psychologically.” Added to that, the doors to bedrooms have been personalised by setting them back into slight recesses decorated in vivid blue, fuchsia or lime-green.

It has all the machinery and space that residents need, but this “re-ability centre” raises the architectural game by looking beyond depressing functionality. It is pleasant, relaxing and uplifting, so has to be better for rehabilitation than the boxy greyness usually offered in care homes.

As for the above-average building cost, Montgomery reckons it will pay for itself through its popularity with residents and their health service backers.

The wow factor comes at a cost

Strode Park’s 599m2 “re-ability centre” was built for £1,096,500, according to project QS Dearle & Henderson and main contractor Barwick Construction. Given its generous-sized bedrooms with en-suite bathrooms and fixed hoist tracks, the curved plan, the multiple monopitched roofs and the tropical hardwood cladding, this was never going to be a bargain-basement care home. The unit cost of £1,830/m2 was substantially higher than the Building Cost Information Service’s benchmark for old people’s homes of £1,015/m2.

Even so, the lowest tender came in higher than Dearle & Henderson had calculated, as director Paul Rickards admits. “We then negotiated a series of value engineering savings with the contractor,” he says, “and this reduced the contract sum by a quarter of a million pounds [or 19%] from £1,342,934 to £1,092,267

“We had to find items that could be changed without needing a new planning application. So the monopitch roofs, the curved plan and the hardwood cladding all had to stay because of their wow factor.”

And even though they are excessive for a single-storey timber-framed building, the piled foundations also escaped change so as not to damage the specimen tree roots.

The items that were inconspicuously pared down in specification included: