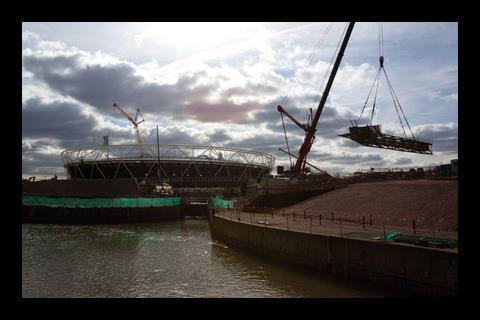 A huge road crane, normally used for erecting wind turbines, was used to lift the 36m-span bridge sections into place 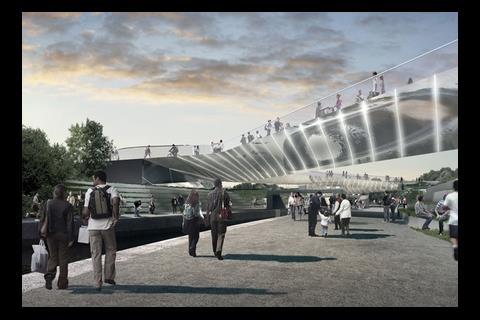 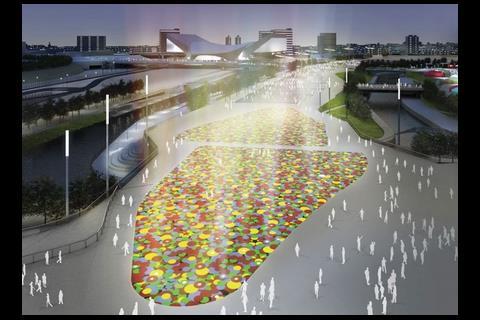 During the Games, a temporary bridge will join the two permanent spans to create a 54m-wide structure 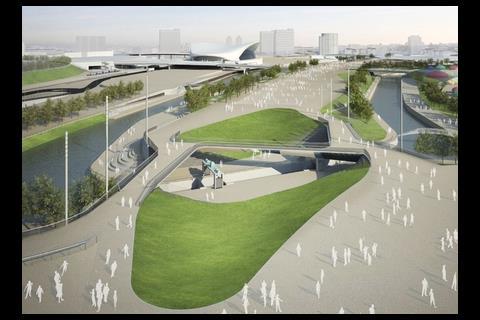 In legacy mode, the bridge comprises a pair of parallel structures spanning the river. A diagonal 2.5m-wide section forms a viewing gallery over the lock

Heneghan Peng’s 54m-wide central bridge at the Olympic park, which was lowered into place last week, has been ingeniously designed to form two narrower walkways after the Games have finished. Stephen Kennett explains how it all works

When the London Olympics opens to the public on 27 July 2012, about 200,000 visitors a day will flock into the site over a huge landbridge. The 250m-long Gateway to the Games forms the roof of the aquatics centre training pool and will use 1,700 tonnes of steel in its construction. But despite these impressive numbers, there’s another footbridge that is likely to steal the limelight.

Back in October 2007, Dublin-based architect Heneghan Peng and structural engineer Adams Kara Taylor won a competition to design a footbridge for the central pedestrian concourse in the Olympic park.

This bridge, which was lowered into position last week, is different to the others on site. One of the ideas in the park’s masterplan was that bridges should generally be simple and elegant structures that get subsumed into the landscape. But the central bridge, which spans 36m over the River Lea at the point where the Olympic stadium links with the aquatics centre and the basketball arena, is much more adventurous.

Of course, this wasn’t just a design competition for a simple bridge. It had to meet two conflicting criteria: to meet the capacity required during the Games and to leave a striking structure in the centre of the park as part of their legacy.

The solution is two elegant narrow footbridges that run parallel to one another, linked by a diagonal “blade” walkway that crosses over the Carpenters Lock. During the Games, however, the entire area between the structures will be infilled with a temporary 41m-wide deck to create a single 54m-wide structure.

Creating the two footbridges was a challenge. Not only do they have complicated geometries, with triangular wedge sections that twist and curve as they go over the water, they are also clad in 30 tonnes of polished stainless steel panels to give a seamless mirror finish. To create this seamlessness, the panels were fitted almost flush against one another, which meant that there was another tricky little problem to solve. “This is a particularly complex structure in that it has no room for thermal expansion in it at all,” says Rob Patterson, who is project managing the installation for Lagan Construction. “It’s entirely restrained by the abutments, and the deck is designed to accommodate the forces.”

The structure has no expansion in it at all. It’s entirely restrained by the abutments, and the deck is designed to accommodate the forces

The construction process is not being helped by the constrained site and the additional need for the bridge to act as the support structure for utilities that cross the water. Aluminium conduits have been threaded through the steel framework to carry communications, water, waste and district heating mains. “It’s a challenge to capture everything the architect intends into something that can be engineered and also accommodate these critical utilities,” says Patterson. “On top of this, the utility companies also need to be able to access the services later for maintenance; it is very much a working bridge.”

The abutments were constructed first, while the primary structure was being prefabricated out of tubular steel in Poland. This structure took the general profile of the finished bridge and was delivered to site in sections. It was these that were assembled and lifted into position last week, an operation that required one of the world’s largest road cranes (pictured above left).

This wasn’t a straightforward operation. Because of the shape of the two bridge-sections, one of which weighed 42 tonnes and the other 47 tonnes, the centre of gravity didn’t line up with the centre line of the abutments. This meant that when they were lowered onto their supports, they wanted to twist. When the diagonal blade walkway between the two bridges is fixed into place, this won’t be a problem as it will counter the twisting movement, but for the construction phase, two temporary towers had to be built at each abutment to hold the bridges during the five-day welding operation to fix them in place.

In April the blade section will arrive on site where it will be assembled and lifted into position. At this point the temporary support towers can be taken down.

The stainless steel finish is the key to making the bridge a spectacle. The geometry of the cladding surface is irregular and each panel is unique, either twisting or twisting and curving in combination. To get the exacting tolerances the architect wanted and create the double-curving form, panels are being fixed to a secondary steel frame. They are being installed by Waagner Biro and are welded into position. This creates a problem as welding can cause shrinkage around the edges, thereby spoiling the finish. Waagner Biro tried to pre-empt this by created a mock-up in Austria to iron out potential installation problems.

“When you stand below it and look up it will be like looking in a mirror,” says David Baird, project sponsor for infrastructure with the Olympic Delivery Authority. “It was a balance between having a thick plate where you wouldn’t get any weld coming through, which is expensive and also adds to the dead load on the structure, and too thin a plate that would distort. We have cut it right back to the minimum without having any obvious weld marks.”

Around 900m2 of 4mm thick stainless steel cladding will be installed, 75% before the Games and the rest when the bridge is converted for legacy

In total, about 900m2 of 4mm-thick stainless steel cladding will be installed, 75% before the Games and the rest when the bridge is converted for legacy.

The clever bit of the design, and what impressed the judges at the competition stage, is how the bridge will convert from Games use to legacy mode. There are two elements to this. Gabion walls filled with concrete from demolished buildings are being constructed between the abutments on both sides of the river. The entire area behind these is back-filled and this will form the support for a temporary scaffold platform decked with recycled rubber.

The second element is where the concourse crosses the river. Here a temporary bridge supported by a steel structure spans the Lea between the gabion walls, filling the void between the two footbridges. Cutting across the infill area is the diagonal blade. Because of its slender design, additional temporary steel is required beneath this.

When the Games are over, the gabion structures will be dismantled and part of the infill dug out to create a sweeping bowl between the two footbridges. This material will be re-used for fill and landscaping. “It’s almost acting as a landscape store,” says Baird. The gabions will be re-used to create terraces immediately adjacent to the abutments that sweep into an amphitheatre-like space.

“The original design assumed that we would have a temporary scaffold supporting the infill section but as part of the value engineering exercise we decided to go for this solution using the backfill,” says Baird.

The next big push, programmed for April, is to get the 25-tonne blade lifted into place. Construction is due to be completed at the end of the year. The final structure should be one of the iconic images of the London 2012 Games.