Gardens by the Bay, Singapore 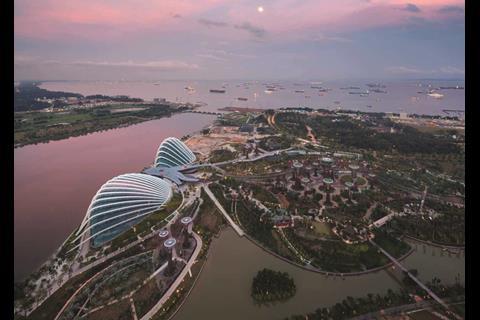 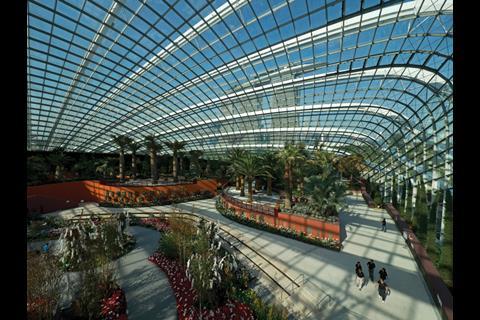 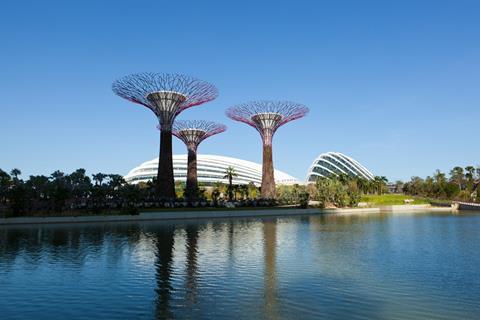 The soaring ‘supertrees’ act as exhausts for the biomass border 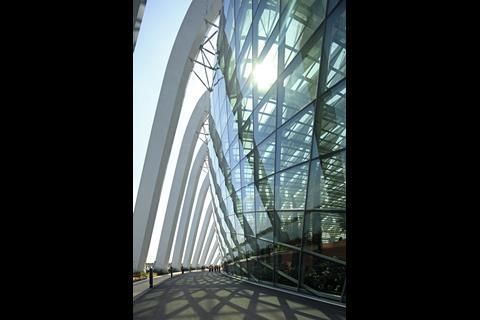 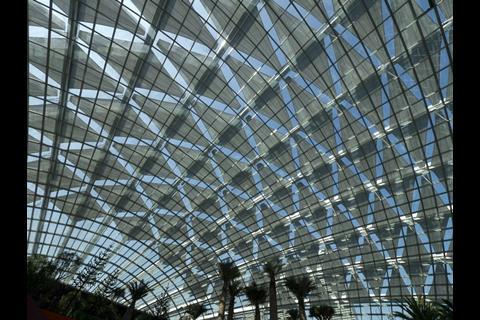 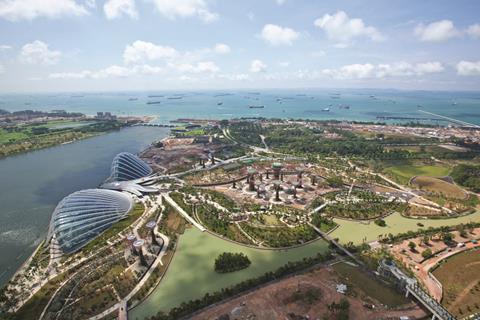 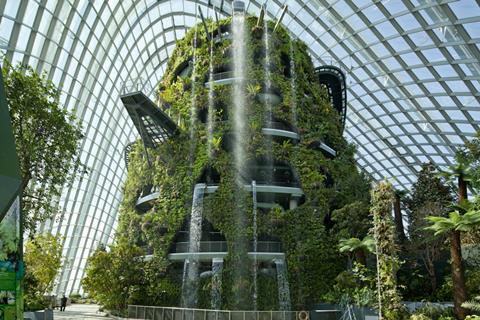 Eleven years ago, the Eden Project opened in Cornwall and catapulted environmental sustainability to the forefront of architectural debate and public consciousness. Greenhouses were nothing new, and had been around in some form or another since Roman times, but what Eden did so effectively was to harness cutting-edge technological innovation to align an ancient typology to modern concerns.

But that was over a decade ago. Now on the other side of the world, a new development is seeking to emulate and evolve this same winning combination of architecture, sustainability and tourism. But this time on a vastly grander scale. By any stretch of the imagination, Singapore’s Gardens by the Bay is a monumental undertaking. A collection of three waterfront gardens have been built on a massive 101ha of reclaimed land in Singapore’s Marina Bay, a new downtown district developed over the past 30 years. The smallest garden, Central Bay (15ha), will eventually be developed as a green promenade link between its two neighbours. The 32ha East Bay comprises a series of large leaf-shaped tropical gardens.

But by far the most ambitious component is £350m South Bay. Some 54ha of gardens, including a series of stupendous 25-50m vertical gardens known as “supertrees”, have been created from a 2006 competition-winning masterplan led by landscaper Grant Associates. The centrepiece of South Bay, and arguably its most striking architectural feature, is two gargantuan glass domes designed by Wilkinson Eyre. Officially opened earlier this month, the soaring structures are among the largest climate-controlled conservatories in the world.

The 12,800m2 Flower Dome houses plants in Mediterranean conditions while the 7,300m2 Cloud Forest Dome harbours a tropical climate. The Flower Dome reaches a height of 35m while the summit of the Cloud Forest is 60m above the ground. The latter also includes a 35m-high planted “mountain” complete with waterfall, internal accommodation and high-level walkways.

Both domes are formed by a composite steel grid-shell structure supported by a radial web of steel ribs. But the really impressive aspect from both an aesthetic and environmental point of view is that they are both entirely covered in glass.

In our environmentally conscious age, how do you create two vast glass conservatories in one of the hottest tropical climates in the world and manage to cool them sustainably? Wilkinson Eyre director Paul Baker sums up the innovative approach under three simple headings: “shape, glass and cool air”.

The distinctive elliptical form of the conservatories is derived from a toroid segment, a doughnut-like geometric shape spun from a series of revolving and repetitious planes. In so doing, the orientation of the domes is optimised to minimise solar gain. Additionally, their curved form creates a smaller surface area than would be the case on an angular building. This further minimises potential exposure to solar gain.

The steel rib-cage arches spun across the outer surface of the domes help to provide stiffening and deflect wind loads. The glass they hold in place is fragile and lightweight and supports nothing other than its own weight. This has been done to admit as much daylight as possible into the domes but with minimal structural interruption. Even the radial steel fins that hold the glass in place taper to a slender, pointed edge. 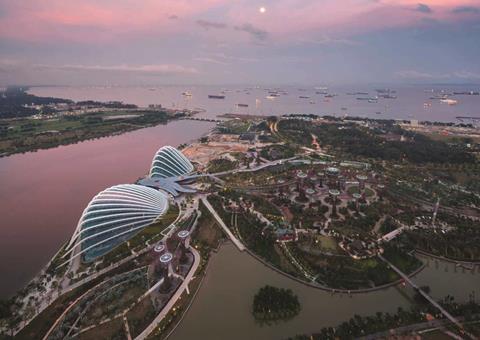 The glass itself is high-performance double glazing with an invisible low emissivity coating applied. This still enables it to transmit 64% of daylight with only 38% of corresponding heat gain. Light levels at Gardens by the Bay are 45,000 lux greater than those at the Eden Project. Although these conditions are phenomenal for the cultivation of the plants within the domes, it is indicative of the biggest challenge the design team faced: maintaining optimum daylight levels while minimising heat.

In addition to the low emissivity coating, another strategy was also devised to enable the envelope to address this dual requirement. When sunlight is particularly harsh, translucent fabric sails can be extended across the outer face of the domes, providing protection from glare and heat. When retracted, these sails are snugly concealed in grooves embedded into the soffits of the superstructure arches. 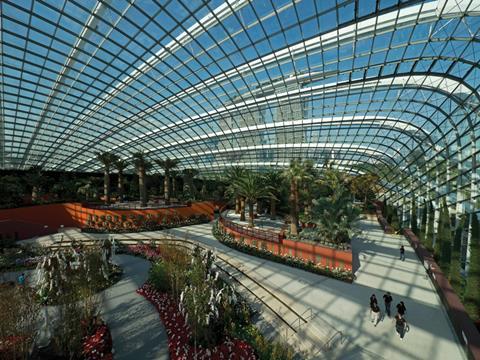 But it is the cooling of the space inside that is critical to the domes’ environmental strategy. Essentially, this has been based on a displacement ventilation system. Fresh outside air is drawn into plant rooms, where it is is dried with a dessicant before passing into conventional chillers. Cool air is then pumped out at low velocity through multiple outlets in public areas, trickling in through, under and around internal features and fixtures such as landscape, walls and seating.

Critically, only the lower, publicly accessible areas of the domes are cooled. In order to save energy and minimise waste, the upper space is allowed to warm up or stratify. Cleverly, hot air is then collected from the top of the domes and used to regenerate the dessicant at the beginning of the cooling cycle.

Energy for the dessicant and chillers is also produced by an on-site biomass boiler entirely fuelled by mulch collected from local parks and pruned trees. And in a neat final twist, the “supertrees” act as giant exhausts for the biomass boiler. Thus, all the energy for the mammoth task of cooling the gigantic glass conservatories is derived from renewable sources.

Baker says this highly sophisticated, zero-carbon system plays as pivotal a role as the plant displays themselves in helping to maintain a “symbiotic” relationship between the domes and the rich natural landscape that surrounds them. 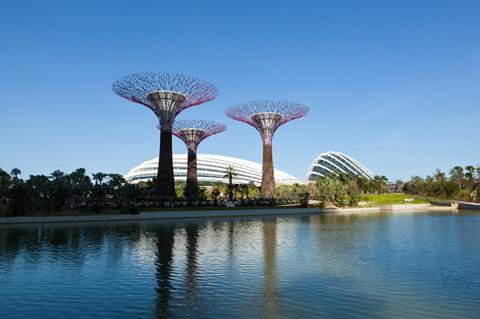 The soaring ‘supertrees’ act as exhausts for the biomass border

Gardens by the Bay is a formidable riposte to those who croon that glass buildings are inherently unsustainable. If two gigantic glass greenhouses can be environmentally delivered just one degree north of the equator in one of the hottest and most humid climates in the world, how much greater must the environmental and technological capabilities of glass be in our own temperate climate?

But even Baker admits that the environmental strategy adopted at Gardens by the Bay would not be suitable in all situations: “It wouldn’t be appropriate for an office block or residential building. But this project is unique, a one-off, and as such it has been designed in direct response to the site’s context and conditions. Technology was also the key, we had to think about that right from the start and then that informed the aesthetics.”

As with Eden, there is a strong educational and even political aspect to the scheme. The brief set out to bring issues such as deforestation and endangered species to a new audience. “You get the impression that many of the people that visit Eden are already in some way sympathetic to the sustainability cause,” says Baker. “Gardens by the Bay is more about creating a new awareness of nature and bringing the issues surrounding climate change to the unconverted.”

For all the futuristic sophistication of its design, there is something primal and organic about the twin domes. Clamped within their ribbed exoskeleton, their crystalline, translucent skins swell and recede like gigantic glass pupae or two solemn, seed-like sentinels guarding the city beyond. Complemented by a stunning waterside location, the domes are a spectacular sight, the raw urban power of which is both challenged and enriched by the dramatic and omniscient incursion of nature.

In both form and function therefore, Gardens by the Bay is an impassioned evangelist for technology and the environment. But it is a cultural bastion too - for it is the sheer scale of public projects like this which, as much as any skyscraper or new city, speaks of the chasm in confidence and ambition that increasingly exists between a rampant Asia and a stymied West.