Get Luder: Owen Luder’s fight to save Gateshead carpark 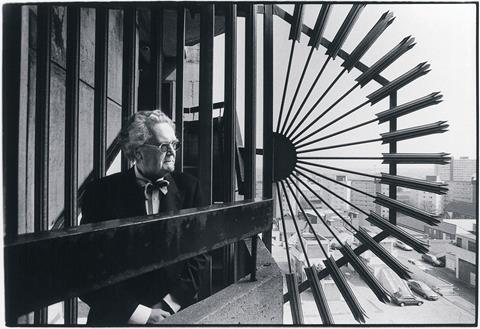 From the archive: Back in 2005 Building joined architect Owen Luder as he tried to save his brutallist car park, made famous by the film Get Carter, from demolition.

At 11am sharp, Owen Luder arrives at Newcastle train station and hops into cab to confront the people of Gateshead. He wants their support to help him secure the future of the town centre’s car park, which he designed nearly 45 years ago.

The local council has decided it should be demolished, describing it as “a monstrosity”. It has also been nominated as one of the country’s ugliest buildings by Channel 4 series Demolition.

The council is in talks with site owner Tesco to redevelop the adjoining shopping centre. They argue that to regenerate the ailing town centre, the area has to be flattened. At the moment, only the first seven floors of the car park are in use, as the council has cordoned off the four upper levels, arguing that the structure is unsafe.

Luder believes the arguments are nonsense. His building dominates the Gateshead skyline, and he reckons that with a bit of refurbishment the car park could re-establish itself as an iconic building and refresh the town. His idea is to strengthen the structure of the upper storeys, and attach a climber lift to take people up to the top.

The top level was originally designed to house a nightclub and restaurant. The view is certainly impressive – Foster’s Sage music centre and Wilkinson Eyre’s “winking bridge” are just two of the landmarks that can be seen. And it was from this spot Michael Caine famously threw the villain in Get Carter to his death.

Luder’s much-criticised brutalist Tricorn Centre in Portsmouth was demolished in February. He now wants to save his other cult building, and will ask local folk whether they agree with his or Tesco’s vision …

SCENE 1: Stand-off in the car park

Luder surveys the innards of the car park. The photographer snaps away as Luder assesses the damage to the concrete caused by rain over the past 40 years. He claims the surface can be repaired and painted to create a clean new image. A car park inspector approaches.

Car park inspector: Oi! Have you got permission from the council to take photographs here?

CPI: In that case, I’m going to have to ask you gentlemen to leave.

OL: What do you think of the plans to knock this car park down?

Luder exits, content he has at least one supporter in Gateshead. Outside the car park, in the public square, he bumps into a local resident. Amazingly, he is a retired car park inspector, who until last year worked at a nearby site. His brother-in-law is yet another who works in what Luder until now suspected was a niche industry. It is becoming apparent that his car park may well hold the key to the local economy …

Luder approaches two femmes fatales sitting in the square by the car park. They refuse to disclose their names, and mysteriously refer to themselves as “Mrs Smith and friend”.

OL: Do you think this car park should be pulled down?

Friend: It’s horrible; an eyesore. Nobody uses it.

OL: I’m the architect. I built this 40 years ago, when I was a young man and you were lovely young ladies.

OL: What if it was repainted and the top floors done up with a bar or nightclub? Fixing the upper storeys would provide more parking space, attracting families. The shopping centre would then be done up, as more people would shop here.

Mrs Smith: Oh yes. That would be okay. I’d save it then.

Luder confronts a big man. He may be an intimidating size, but Luder notes a softness around the belly and decides to take him on.

OL: What do you think of this building?

The Big Man: Yeah, it’s alright. It could do with some sprucing up, mind.

A passer-by shouts out that it should be demolished. Luder shakes his head.

OL: Tesco and the council want to tear it down.

The Big Man: I know. They shouldn’t. Spruce it up a bit, put a bit of paint on it and it’d look great out here again. It’s got a bit of history. You know, with the Get Carter film.

The Big Man: Of course; everyone around here does. I like that bit when the bad guy is chucked off the top of the car park and his arms and legs start flapping everywhere [laughs]. That’s really funny.

Luder now has seen off the big man, who is wearing a bloodthirsty smile as he recalls some of the films more violent scenes. This emotional reminiscence is not a surprise to Luder: the Get Carter fan club often invites him to talk about the car park when its members get together to visit scenes from the film.

Luder takes a last walk around his car park, satisfied that the people of Gateshead want to keep it.

OL [to camera]: That was interesting, wasn’t it? In its current state, people don’t want it. And that’s quite right. But if it’s redeveloped – which wouldn’t cost that much – people are quite happy to keep it, rather than go through the noise and mess of demolition and rebuilding.

Luder walks over to the security fence that blocks access to the top four floors.

OL: It’s such a shame for the people of Gateshead to leave it this way. I think the original vision for a nightclub and restaurant at the top of the building was 10, maybe 30, years ahead of its time … Imagine how popular that would be today!

Luder surveys the landscape from the seventh storey. Fade to black.

Owen Luder
A 76-year-old bow-tie-wearing architectural anti-hero from east London who has travelled to the north-east to right a wrong.

Gateshead car park
Luder’s creation. Built in the 1960s, it featured in key scenes in the Michael Caine film Get Carter, and has achieved cult status as a result.

Tesco
The car park’s current owner. It has a store adjacent to it and is in talks with the council to demolish and redevelop the site.