While the economy is slowly returning to health, July did witness a slight decrease in construction levels

With a strong first half to the year the UK economy is on course to grow by more than 3% this year, one of the fastest growth rates in the G7.
However, a closer analysis at the fundamentals of growth within the economy demonstrates that only the service sector is above its pre-recession peak, with all other sectors still below the level recorded at the start of 2008.

The latest unemployment figures also showed a further decline in the number of people out of work. There were 2.08 million unemployed people in April to June 2014, down by 294,000 from the previous year. This means that the unemployment rate is now 6.4%, its lowest rate since late 2008.

The latest forecasts from the Bank of England predict that GDP growth will maintain at 0.8% in Q3. The Bank is also confident that there is significant slack in the economy, allowing it to grow without rapid inflation. It maintains the view that business investment will increase this year with some evidence in official statistics. If business investment does maintain its increase the longer-term outlook for UK economic performance will be substantially improved.

Other news this month which supports the improving economic environment includes:

The number of construction projects within the UK in july increased by 9.8% on June, and is 19.1% higher than July 2013

The Bank of England Inflation Report was also released this month which painted a broadly positive picture of the UK economy. It highlighted the continuing improvement in output and unemployment and noted that business investment levels are increasing. However, it also noted that productivity and wage growth remain weak and it is unsure of the reasons or the extent to which this will endure. It is Barbour ABI’s view that the near-term outlook for the UK economy is good but addressing the productivity puzzle will be vital in ensuring sustainable economic growth. Comparing Q2 output levels with the same period in 2013 showed an increase of 4.8%. However, the construction sector still remains 10.3% below the levels of output recorded in Q1 2008, before the start of the economic downturn.

It is clear that it is the housing sector that is driving growth within the industry (see construction activity by sector, opposite). New private housing increased by 3% from the previous quarter and 17.1% from the corresponding quarter in 2013. At the same time new public housing increased by 5.2% between Q1 and Q2 2014 and 27.7% from Q2 2013. Output in the private commercial sector fell this quarter, decreasing by 4.3% in Q2 2014 from Q1 2014. Infrastructure declined by 3.9% in the same period. This highlights that the growth patterns within the industry are reliant on housing and broader improvements are needed to ensure a robust recovery. Further analysis shows that output in the commercial sector is 38% below the level recorded before the recession which demonstrates the long-term challenge to the industry.

The CPA/Barbour ABI Index, which measures the level of contracts awarded using January 2010 as its base month, recorded a reading of 128 for July. This is a slight fall from last month but continues to support the view that overall activity in the industry remains strong (see contracts awarded, opposite). Private housing has increased its reading this month after falling back recently, demonstrating the continuing high levels of activity in the sector. The reading for commercial offices and commercial retail fell back with readings of 137 and 130 respectively. This is further evidence of a lack of momentum in the commercial sector, the traditional largest sector in the industry. 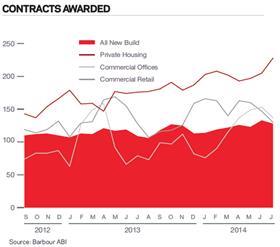 According to Barbour ABI data on all contract activity, July witnessed a slight decrease in construction levels with the value of new contracts awarded at £5.1bn, based on a three-month rolling average. This is a small 3.2% decrease from June though it is a 6.2% increase on the value recorded in July 2013, an indication of a stronger summer for construction this year. The number of construction projects within the UK in July increased by 9.8% on June, and is 19.1% higher than July 2013.

The majority of the contracts awarded in July by value were in the South-east and London, which accounted for 15% each of the UK total (see locations of contracts awarded, opposite). The main reason for this was the £150m smart motorway project on the M3 in Surrey awarded to Balfour Beatty last month and the £100m contract for The Corniche, a residential development as part of the regeneration of Vauxhall Nine Elms. The North-west recorded 12% of the value contracts in July and the east of England accounted for 11%. In the North-west the redevelopment of the Manchester Business School, which was valued at £40m, proved the biggest deal for the region, and in the east of England it was the contract for Gateway Peterborough, a major warehousing and distribution centre, valued at £140m. 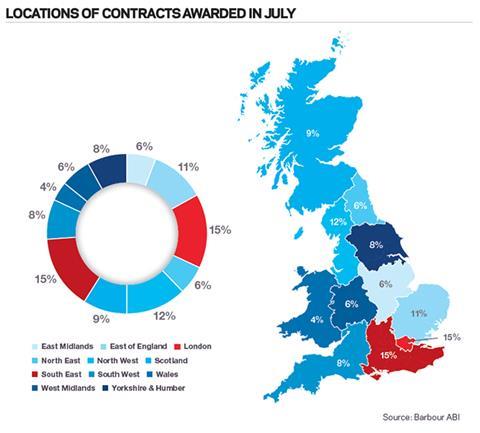 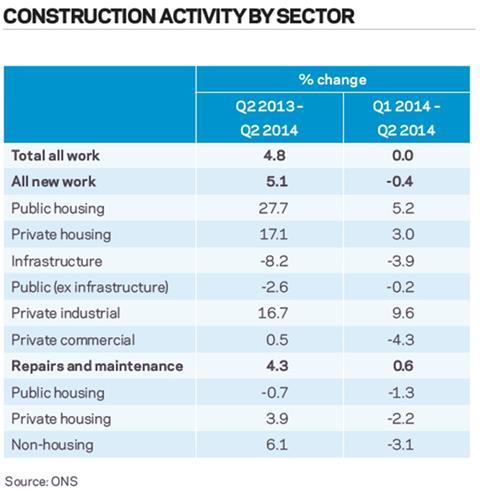 Activity in the residential sector was high in July with the total value of contract awards at £1.7bn, based on a three-month rolling average (see project value chart opposite, bottom right). This is a 0.2% increase compared to June and is 14.9% higher than July 2013, indicating that the summer of this year has seen a further increase in activity. The number of units associated with residential contracts awarded increased by 7.8% between June and July 2014, based on a three-month rolling average, and were 26.1% higher than July 2013, confirming the longer-term increase in activity in the sector. 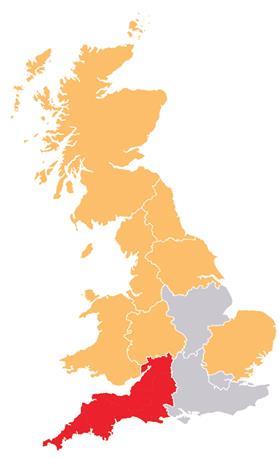 London is the main location of activity in the residential sector this month, accounting for 17.9% of the value of contracts awarded, although this was a decrease of 4.1 percentage points from the same month last year (see map and figures below, and value of contracts by region, right).

London’s prominence was primarily due to the award for The Corniche as part of the Vauxhall regeneration area, with a project value of £100m.

The North-west, South-west and South-east were the next most popular locations for residential contracts this month, accounting for 13.4%, 12.6% and 12.4% of contracts awarded respectively. 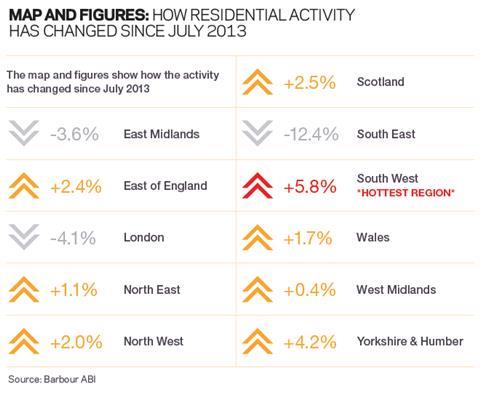