Market review: So far, so good

The value of construction contracts awarded in the UK rose to £6bn in October, but there is evidence of a slowdown in the housing market and signs that all is not well in the eurozone. Here are highlights of Barbour ABI’s latest monthly Economic & Construction Market Review

The UK economy grew by 0.7% in Q3 2014, continuing the pattern of growth from the first half of the year. Output increased in all four main sectors with services growing 0.7%, production 0.5%, construction 0.8% and agriculture 0.3%.

When analysing growth in each of the main industrial groupings it is notable that the service sector is the only one which is above its pre-recession levels of activity with output 7.2% above the Q1 2008 level. In contrast, construction is 8.2% below its 2008 level; manufacturing is 4.1% below and production 9.7% lower.

The number of construction projects within the UK in October increased by 5% on September, and is 1.9% higher than October 2013

With GDP continuing to grow, other macroeconomic indicators also continue to point to an improvement in the UK economy. The labour market maintained its recent strong performance as unemployment fell once again in the three months to September and now stands at 6%, which is the lowest rate since 2008.

There was also an improvement in real wage growth which has been performing particularly poorly over recent years. For the first time since September 2009, regular pay growth exceeded inflation with annual wage growth 1.3% compared with inflation levels of 1.2%. The Bank of England is confident that wages will continue to rise above inflation so these indices will be closely scrutinised in the coming months to assess whether this is the case.

While the headline economic indicators continue to point to a strong outlook, there is increasing evidence of a slowdown in the eurozone with the normally resilient German economy showing evidence of slowing growth. There was some evidence of a slowdown in the UK housing market but forward sales for major housebuilders remain strong. While output is growing and unemployment falling, there are still a number of fundamentals that pose longer-term problems for the economy, particularly lower productivity and slow wage growth, which although above inflation this month will provide a drag on performance unless the rate of growth increases considerably.

Comparing output levels with Q3 2013 showed an increase of 0.3%. This is confirmation of the longer-term growth in activity within the sector.

It is clear that the housing sector is the main component of growth within the industry over the longer term (see Construction output by sector, opposite). Comparing this quarter with the same quarter of 2013 private new housing increased by 18.9% and public new housing increased by 35.2%. Over the same period output the private commercial sector decreased by 6.7% and infrastructure decreased by 5.5%. This highlights that the growth patterns within the industry are reliant on housing and broader improvements are needed to ensure a robust recovery. 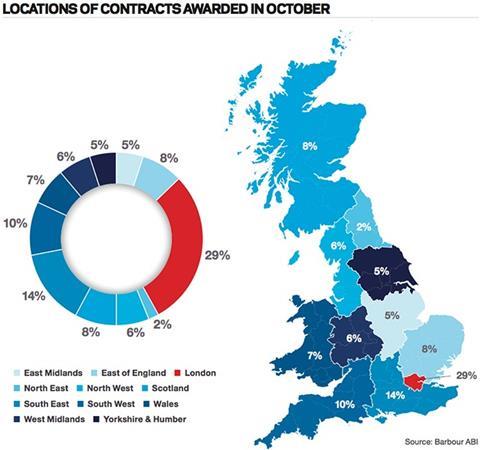 The CPA/Barbour ABI Index which measures the level of contracts awarded using January 2010 as its base month recorded a reading of 136 for October (see Contracts awarded graph, opposite). This is a slight increase from last month and continues to support the view that overall activity in the industry remains strong. The readings for commercial offices and commercial retail were up this month. However, private housing fell this month to 229, down from a high of 246 in September.

According to Barbour ABI data on all contract activity, October witnessed an increase in construction levels with the value of new contracts awarded at £6bn, based on a three month rolling average. This is a 5.9% increase from September and a 6.1% increase on the value recorded in October 2013, an indication of continuing growth in the fourth quarter. The number of construction projects within the UK in October increased by 5% on September, and is 1.9% higher than October 2013.

The majority of the contracts awarded in October by value were in London, accounting for 29% of the UK total (see Locations of contracts awarded graphic, opposite). This followed by the South-east with 14% of contracts awarded. The main reason for London’s dominance was the £600m Northern Line Extension contract which was awarded to the Ferrovial/Laing O’Rourke consortium. The contract to redevelop Number 1 Court at the All England Lawn Tennis Club in Wimbledon was also awarded in October, at a value of £150m. There was also a major residential project awarded at Kidbrooke Village in south-east London which is valued at £100m and set to deliver over 1,000 residential units. In the South-east a major retail scheme named Watermark West Quay in Southampton was awarded this month at a value of £70m. In addition a contract to deliver a care housing development in Hampshire worth £45m contributes to the strong performance of the South-east.

Residential had the highest proportion of contracts awarded by value in October with 30% of the total. The infrastructure sector also featured prominently this month accounting for 22% of the total value of all projects and commercial & retail accounted for 16%. This is an indication of the continuing strength of the residential sector within construction, although it is notable that the infrastructure sector has a significant proportion of contracts this month after its recent sluggish performance. 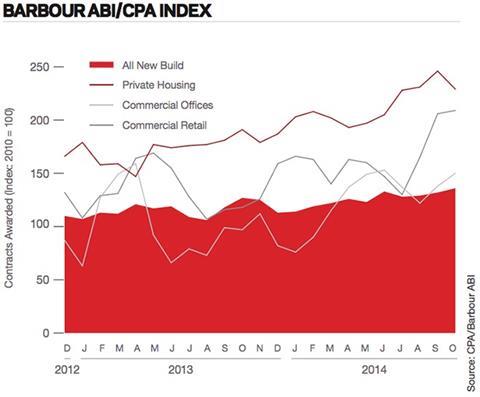 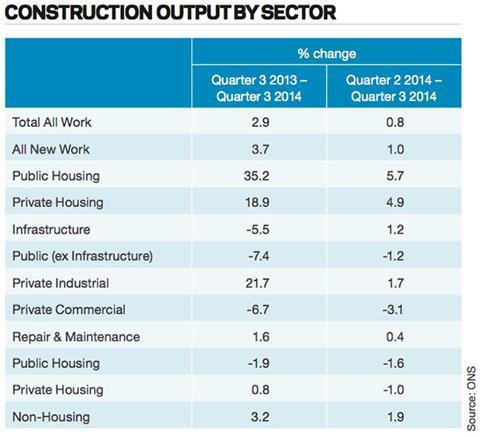 Activity in the residential sector was higher in October with the total number of units awarded at 13,554, based on a three-month rolling average. This is a 9.2% increase compared to September and is 34.2% higher than October 2013, indicating the longer term increase in the sector.

The value of projects associated with residential contracts awarded decreased by 0.6% between September and October 2014, based on a three-month rolling average, and was 6.2% lower than October 2013, suggesting that while the number of units is increasing the actual values of contracts are not. This is perhaps an indication of a wider spread of projects over recent months, as opposed to a concentration in London where values tend to be higher.

The latest house price indices for October from Nationwide showed that average house prices are rising at 9.0% annually, a slight fall from 9.4% last month. The Halifax reported annual house price rises recorded at 8.8% in October, down from 9.4% in September.

The Land Registry also detected a fall in house price increases with growth down in seven out of 10 regions in England and Wales.

In particular, it noted that London experienced a month on month drop of 0.7% in September, the first monthly fall since October 2013. 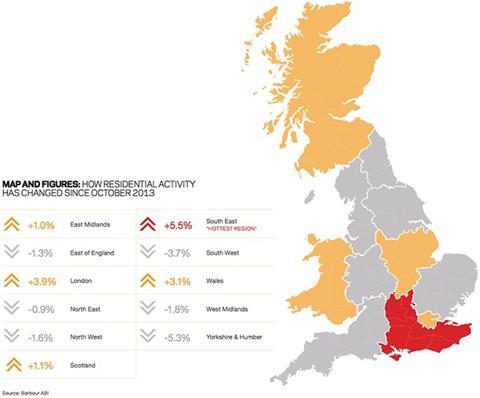 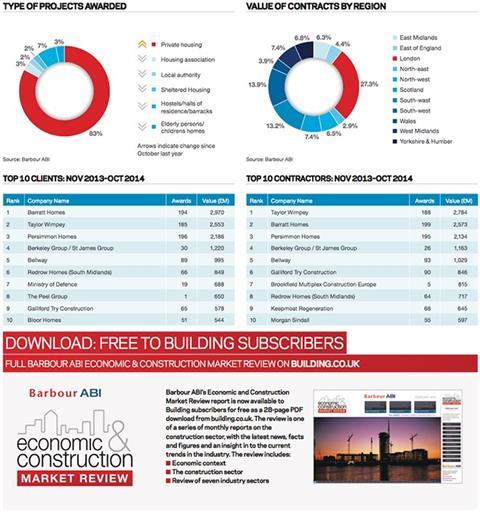