SMEs may not offer the fullest range of employee benefits and they certainly can’t sustain huge HR departments, but these restrictions can in fact make them very attractive employers 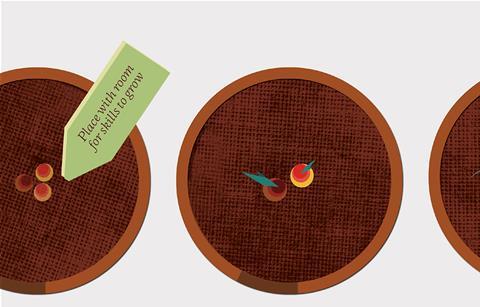 “When managers complain about their employees, it makes my blood boil,” says Allan Meek, managing director of Cardiff-based SME contractor SCS Group, with emphasis. “Because I don’t think anyone goes to work to do a bad job.”

Meek is discussing how SCS’ culture of looking after and valuing its staff - including offering an enticing package of benefits including healthcare, pension contributions, profit share bonuses, shares, flexible working and free gym or boxing club membership - marks it out from many of its competitors, whose management he claims undervalue staff and often snipe about them.

SCS’ more enlightened approach has earned it a place in this year’s Good Employer Guide. And one of the most interesting aspects of this year’s roll-call is that SCS is joined by a great many other SMEs. Over 90% of the list this year are SMEs - defined as firms employing fewer than 250 staff.

This is partly because there are more SMEs in the market, due to a spate of start-ups founded by people leaving bigger firms voluntarily or through redundancy during the past few difficult years. But Meek and his contemporaries at other SMEs - including consultants Buro Four, Jackson Coles and DBK and architect Stanton Williams - argue SMEs also have innate advantages that have helped them secure a place in this year’s Good Employer Guide.

These include being lean enough to engage and communicate more closely with staff and agile enough to ditch systems or mix things up when they’re not working. But even these enlightened SMEs acknowledge there are challenges to offering generous benefits in straitened times, particularly when they don’t have the financial firepower of larger rivals. So how do they do it? And what can companies large and small learn from them?

SMEs assert that they are naturally better placed to engage with their staff because of their smaller size. Put simply, management can meet a greater proportion of staff and staff in turn can feel more tied in to the goals of management, so the argument goes.

“The biggest advantage of working for an SME rather than a corporate is an absence of ‘them and us’,” says Richard Jones, senior partner in Jackson Coles. Jones says staff who have joined from larger rivals often comment on the “greater transparency” at the firm, which manifests itself in regular communication of the business’ goals to staff, including at an annual practice-wide meeting where most staff get involved in presentations. “After these meetings some people [who have left larger firms] tell me it’s the first time they’ve had an update like that. It helps them feel they belong to the business.”

Peter Murray, director of Stanton Williams, agrees a small size can help facilitate better communication. The architectural practice has an initiative where directors take new starters for lunch when they join and “keep in close contact with them” thereafter. “These things are easier when you are this size,” he says. “If you were larger you might have to be more profit driven […] We’re 80-strong and we really like that size as you can keep a culture of a family.”

Their size also allows smaller businesses to be more agile in offering benefits to staff. SCS’ Meek gives the example of the offer of free boxing club membership to staff as an example of a benefit offered by management “on a whim”, which a “more bureaucratic larger” rival may not have been able to offer at short notice. It has proved very successful, with eight sign ups and participants’ “self-esteem boosted massively,” Meek says. “Although there were a few people coming into the office with black eyes!”

Murray says the activity schedule at Stanton Williams is “constantly changing” to keep staff engaged, with current highlights including inspirational talks by staff, weekly tai chi classes, and a dragon boat racing team. In a similar vein, Roberts says Buro Four’s office has held impromptu BBQs over the summer to take advantage of the heatwave.

SME agility can also manifest itself in giving staff a greater variety of career opportunities, which larger firms with more rigid organisational structures might struggle to offer. Roberts says that Buro Four ensures staff
“have opportunities to progress on different types of projects” so employees are “not pigeon-holed as just the ‘resi person’ or something like that.”

Offering benefits, however, can prove expensive. Meek admits SCS had to make some tough decisions when the recession hit. “We lost about 10 staff over two years,” he says. “For us to then say we’re keeping all these benefits was a really difficult choice - but we decided to stick with the benefits because we believed in it.”

Duncan Berry, managing partner of DBK, agrees the recession proved difficult for his company but it also decided to stick with generous benefits. “Our main asset is people, full stop,” he says. “We have to make sure we look after them.”

Tighter budgets mean SMEs have to be savvy about the benefits they invest in. Roberts says Buro Four puts an emphasis on training courses for staff, including CPD programmes, but they are careful to get feedback from employees on what’s working out. “There’s an issue around economy of scale when you have fewer staff,” he says. “If something is not working - such as a training course we’re doing - we need to move on to something else.”

The SMEs also argue that part of the secret to their success is understanding that not all benefits have to be costly. SCS, DBK and Buro Four emphasise the importance of flexible working, which costs nothing. SCS’ Meek describes it as “the biggest thing we do” and his staff can be found working anywhere from their homes to the local Starbucks. He says a focus on engaging staff is free and can pay dividends. SCS runs a regular survey to test staff engagement, which includes questions about whether workers care about the objectives of the company. “Everyone you speak to in our company cares,” he says. “You can’t fake it. It’s a source of competitive advantage.”

Birmingham-based consultant DBK is one of the high performers in this year’s Good Employer Guide. The judges were impressed with the enhanced benefits it offers - including pension contributions up to 5% - and its savvy approach to engaging with staff. Staff are given a personal and professional development review twice a year, offered flexible working, paid-for RICS subscriptions and an extra day’s holiday a year if they have no sick days. Young up-and-coming staff are encouraged to engage through the firm’s DBK Futures initiative, where younger employees are elected from each office to a board that discusses issues including business development and training and reports into the main board, as well as setting up its own social events. The firm is also part of the Investor in People scheme. Managing partner Duncan Berry says communication is “key”, as is ensuring “as we get bigger we don’t become corporate”.