How real is the construction recovery?

It looks like a recovery, so why isn’t the industry jumping up and down with joy? Building reports on the reality behind the statistics 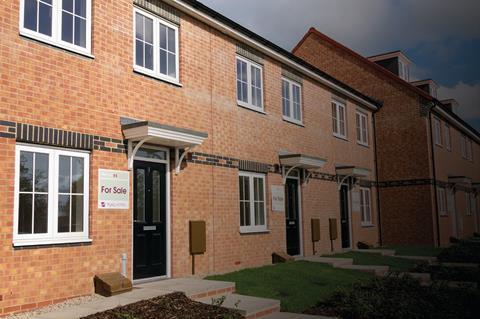 Over the past few months, the industry has been in the grip of an emotion it hasn’t experienced in a very long time: hope. A clutch of recent trade surveys signalled increasing optimism across all parts of the industry that the ever-receding recovery could, finally, be in reach, while the latest construction output figures showed 1.4% growth between the first quarter of the year and the second. This followed the return to growth of the overall economy in the second quarter and a recent bunch of sunny numbers showing consumer confidence returning and purchasing managers reporting increasing activity across manufacturing, services and construction. But how real is this sense of recovery? Could construction really be on the mend?

Certainly, in the housing market optimism abounds. Boosted by the government’s Help to Buy initiative, the housing market is buoyant, with house prices rising at their fastest pace for seven years and average prices beating their 2008 peak. Yet there is scant evidence that the increase in activity is translating to a big increase in supply, with fears rife that the government’s lending incentives are merely creating a new house price bubble. Although total housing output rose 8.7% in Q2 2013 compared with Q1 2013 and 8.6% compared with Q2 2012, if you compare the first half of 2013 with the first half of 2012, the rise is less than 1%. The latest official housing statistics showed the number of housing starts in England rose 6% in the second quarter of this year compared to the first quarter, and 7% on Q2 2012 - an improvement, but hardly a massive leap. Over the 12 months to June 2013, housing starts rose 7% to 110,530 compared with the year before - still well short of the 250,000 homes a year needed to keep up with demand. Noble Francis, Construction Products Association (CPA) economics director, says the signs of recovery in housing are cause for optimism, but cautions that the recovery is from a historically low base and its importance can be overstated: “Housing is not the biggest sector in construction and while it tends to dominate the headlines, it is not a real driver of construction recovery.”

Nevertheless, the CPA marginally revised up its construction growth forecasts this month, on the back of the nascent housing recovery (see chart, below). The CPA now forecasts that construction output will grow 2.2% in 2014, rather than 1.9% - after contracting 1.5% this year, rather than 2.1%, with 4.5% growth in 2015. Experian has also revised up its forecasts, although its expectations are more bearish than the CPA’s, with output expected to contract by 2.3% this year, rather than its earlier estimate of 2.6%, and to grow by 1% next year, rather than 0.8%. However, Experian cut its 2015 forecast from 3% to 2.5% as a result of increasing uncertainty around the timing of the start of work on new nuclear projects. 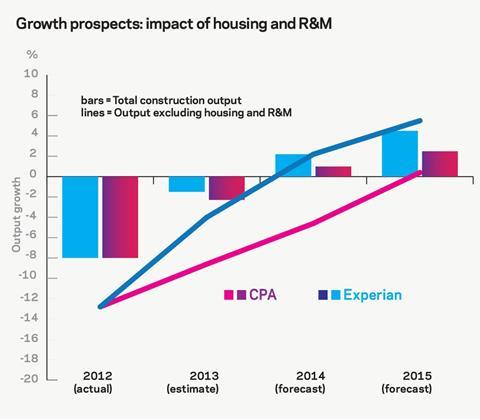 The revisions come amid other encouraging signs over the summer: construction buyers reported a continuing rebound in activity in July, with higher levels of business activity across all main areas of the industry; specialist contractors reported increases in enquiries and improved optimism about future workloads; and SMEs reported rising workloads over the second quarter of the year for the first time since the final quarter of 2007. “Cautious optimism” is the sentiment, says James Hastings, head of construction futures at Experian. “We’ve been there before and it’s been a false dawn, but the general environment is more upbeat now than six months ago. The industry is over the worst but we’re yet to see the more buoyant sentiment transfer into work on the ground.”

Looking behind the headline figures, it’s clear the industry remains fragile. If you strip out housing from the Q2 construction output figures, the picture looks less rosy: construction output, excluding new housing and repairs and maintenance, actually contracted 1.7% between the Q1 and Q2 of this year, rather than rising 1.4% (see graph, right). This is particularly sobering when one considers that total inflation adjusted construction output was at its lowest in 12 years in Q1. Comparing Q2 with the same period last year, non-residential output, excluding repairs and maintenance, fell 4.9% rather than the 1% fall when housing is included.

For their part contractors remain resolutely sober when talk turns to recovery. Nick Pollard, Balfour Beatty’s UK construction boss, says it’s premature to talk of real recovery in the industry. “I’m mildly encouraged by the market,” is the most enthusiastic he gets. “There is a gently rising tide of activity and we’re seeing that in our order books for the regional business, but it’s still very early days.” John Morgan, Morgan Sindall chief executive, is similarly circumspect. He says the overall construction market is “just a little bit better than it was six months ago”. “We’re seeing a little bit of light at the end of the tunnel, there’s a little more work around - but let’s not get too carried away,” he adds.

Simon Rawlinson, head of strategic research & insight at EC Harris, says there will need to be concerted growth in the commercial sector - and not just in London - and strong growth in infrastructure alongside the housing growth before the recovery can gather strength. He says the energy sector holds potential for the industry as the government will need to grasp the nettle of the looming energy shortfall, which would prompt a jump in activity. “But the point where that happens keeps getting delayed. If energy has not got going by this time next year, then you have to wonder what is going to be behind the recovery, other than housing, which is being supported by temporary measures and seems unsustainable,” he says.

Yet of the main non-residential sectors both the CPA and Experian forecast that only the infrastructure and industrial sectors (which taken together are still smaller than the total value of the commercial sector and around 15% of total industry output, including repairs and maintenance) will return to growth before 2015 - and then only single digit growth. The public and commercial sectors are forecast to continue to fall over that period (see overleaf). Experian says its forecast growth will see construction output rise to £99.2bn in 2015, in 2005 prices, which is still more than 13% below its 2007 peak, with recovery to be more protracted than after previous recessions and the industry not returning to its peak until the 2020s. All of which is to confirm that any talk of real recovery is premature. Below, Building analyses the prospects for key individual sectors, but having survived the storm, it seems overall the industry remains in the doldrums - and it will take more than a housing recovery to put a wind into its sails.

Infrastructure contracted by 13% last year, but Experian and the CPA expect the sector to return to growth this year and continue to grow to 2015. Although, with output at historically high levels already, growth is not expected to go beyond double digits. The CPA expects rail to be one of the fastest growing sectors, with work expected to rise 41% through to 2017, as work accelerates on Crossrail. Roads construction, which fell 44% in 2012, is expected also to grow again, albeit from a low base. However, the CPA warns that a lack of clarity over energy policy has led to investment uncertainty in energy infrastructure.

The lack of a deal with EDF over its £10bn Hinkley nuclear new build project is also holding back growth. This has led Experian to downgrade its growth forecast for the sector, as it now assumes there will be no work coming through on nuclear new build until after 2015. However, it says if Hinkley does come online, then output in 2015 will be better than the estimated 4% growth. Experian expects rapid growth in roads, gas and electricity market, and a peak in rail, to offset static to declining water, sewerage and air work. 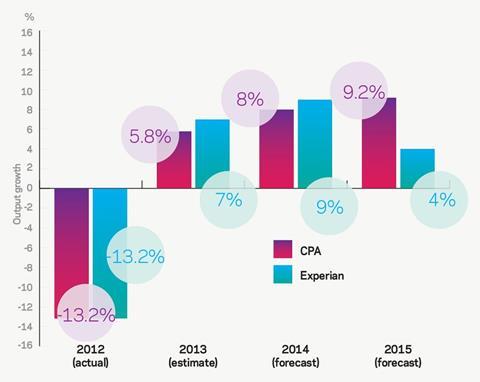 The industrial sector is a bright note, but worth just 3% of total 2012 construction output it is the smallest of all the main industry sectors and is not going to be major a driver of growth. Still, the CPA estimates growth of 3% this year, with an increase in factories offsetting declining work in warehouses.

Next year this is expected to grow more rapidly, as factory construction grows 15% this year and 6% a year thereafter - albeit from a base 61% lower than the pre-recession peak. Experian, which is more bullish in its forecasts, cautions that activity in the sector is largely being driven by a small number of relatively large factory projects, primarily in the automotive sector, such as Jaguar Land Rover’s new plants in the Midlands. 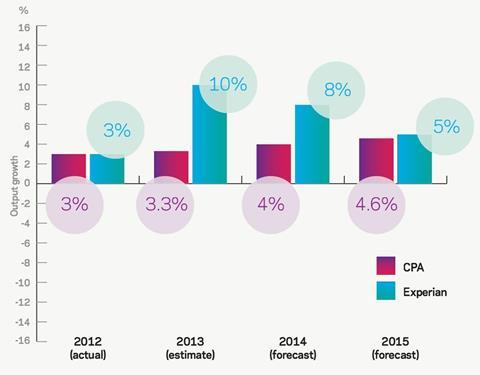 Output across the sector, which covers education, health and sporting facilities, has been falling since 2012, with output last year 27% lower than two years earlier. This decline is expected to continue as cuts to government capital spending kick in, with output expected to fall 13% this year and 2% next year.

Publicly funded education work fell 25% in 2012 and is expected to fall a further 16% this a year, as the final schools to be built through the cancelled Building Schools for the Future £55bn programme fall out of the market and are not replaced at the same rate through its successor, the £2bn Priority School Building Programme. Publicly-funded health construction has fallen by over a third since 2012.

New hospital work is likely to be procured through PF2 but to date the government has not brought forward a significant pipeline of work in this area.
Overall, the public non-housing sector is not expected to stabilise until 2015, with the CPA forecasting growth of 1.9% in 2016 and 2017. 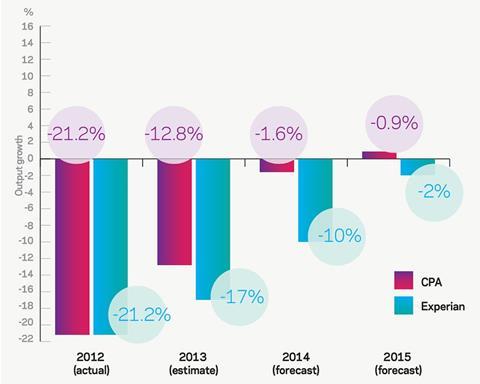 Construction’s largest market, the commercial sector, worth £32bn at its 2008 peak, remains sluggish. Output in the sector, which includes offices and retail as well as leisure, entertainment and privately-funded health and education, was 32% lower last year than the 2008 peak. Offices have been badly hit by falls in investment, with output in the offices market falling 25% over the past five years, while new orders fell 9% last year.  There are some signs of optimism, with major office projects coming online in London, but given the long gestation period for office schemes and the fact that work outside of London has all but dried up, the CPA says the offices sector is likely to continue to fall until 2015.

In the retail sector, the CPA says growth should begin to return next year on the back of a recovery in consumer confidence - although the retail sector will be growing from a base 46% lower than its pre-recession peak. The CPA forecasts that growth will return to the overall commercial sector in the second half of 2014, with output rising by 16% between 2015 and 2017. Experian expects the sector to continue to contract through to 2015, when it will stabilise but at 40% below its 2008 peak in real terms.

It says retail will continue to decline through to 2015 as retailers cope with low consumer spending, the continued expansion of online shopping and substantial vacancy rates on the high street. It says the outlook for leisure is not much better, with only hotels likely to provide a bright spot. 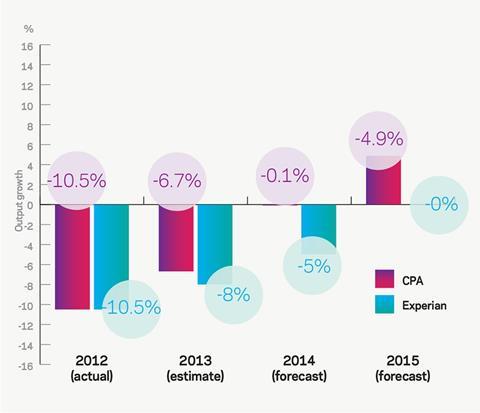