In business with Frank Elkins: on guard at Travis Perkins 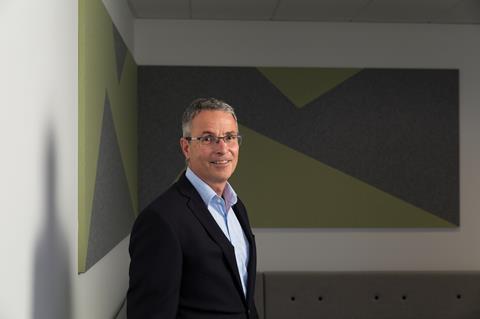 “I never went to school going, ‘You know what? What I really want to do is go into construction.’ In fact, I went to university to go and become a farmer and ended up in construction.”

Frank Elkins is not done yet. “I never thought about it as a career. We’ve got to get to a place where young people look at the construction industry as a really exciting place to come to work and a place where you can build brilliant careers.”

Now 55 and the chief operating officer of the country’s biggest builders merchants, Travis Perkins, Elkins has spent 30 years in it, the past 11 at TP, as he often calls it.

Notwithstanding the impact of inflation, he says there has never been a more exciting time to be in the industry. “I’m seeing a huge amount of change,” he enthuses.

“Digital, legislation through decarbonisation will drive significant change; labour and skills shortages mean we have to build things in a different way from what we’ve always done.”

2003-10 Main board director and managing director at BSS Industrial

While the industry is getting to grips with these issues, Elkins thinks tangible progress is being made elsewhere. “Regarding diversity and inclusion, I think the industry has woken up to that actually. Having a more diverse workforce means we can think differently, do things differently. It has been dominated by white males for too long.”

The son of a vicar and a swimming instructor mother, Elkins grew up in the New Forest, near Christchurch in Dorset, where school holidays were spent working on farms, sparking his ambitions of becoming a farmer.

“I was interested in farming and land management and how you could produce stuff off the land and manage the land. But I went to [Aberystwyth] university and suddenly realised the gestation period of pigs, sheep and cows wasn’t that interesting.” 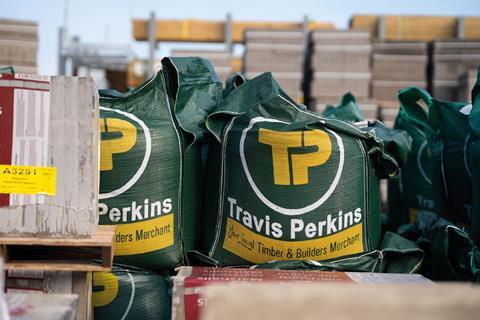 Availability of product shows no sign of being hampered by the rises in fuel, energy and transport costs, but Elkins says there are longer lead-in times on some

A university rugby injury (see panel overleaf) saw him spend six weeks lying flat on an Aberystwyth hospital bed with nothing for company but textbooks and the 1985 World Snooker Championships – culminating with the famous black ball final between Dennis Taylor and Steve Davis that saw over 18 million viewers tune in one Sunday midnight. It inadvertently helped steer him into a career in construction.

He swapped the rugby field for the hockey pitch, bumped into someone who suggested working for electrical wholesaler Newey & Eyre, where he spent a dozen years, then switched to pipes and heating distributor BSS before the firm was snapped up by Travis Perkins for £553m at the end of 2010.

A little over three years ago, Elkins was appointed chief operating officer of the firm, which has 20,000 staff, more than 700 branches and last year posted revenue of £4.6bn and a pre-tax profit of £306m.

The pandemic led to it cutting 165 branches and around 2,500 staff, with the restructuring seeing it shell out close to £30m on redundancy payments and £46m on property costs.

“It [the pandemic] accelerated some strategic decisions that we wanted to make,” Elkins says.

The firm was forced to furlough 15,000 staff at the height of the pandemic, which for Travis Perkins was in the first weeks of lockdown. The firm later became one of the first to say it would pay the furlough money back, and in late 2020 it settled a £100m VAT bill, deferred because of the pandemic.

“Our performance was good enough to justify that,” says Elkins. He’s careful not to stoke the row about whether firms should pay back government support before paying dividends but says: “You’ve got to be mindful of where we need support and where we don’t. I’m not going to judge other people in the marketplace, and we made the decisions we made.”

Pre Ukraine, we thought the inflationary bar would be pretty stable. We weren’t expecting to see massive inflation. Ukraine came along and that has caused input costs to go up again

While grappling with the pandemic is still fresh in the memory, the current overriding issue is inflation.

“This is very different to covid,” he says. “[Covid] was unknown, we were learning very quickly to be agile, make quick decisions. This isn’t about keeping people safe, it’s about making sure we are prepared for whatever happens from inflation.”

He admits this round of inflation is unlike anything he has seen. “I’ve been in the industry 30 years, and the level and the consistency of it over the last two years is unprecedented. I don’t think we have seen anything like this previously.” 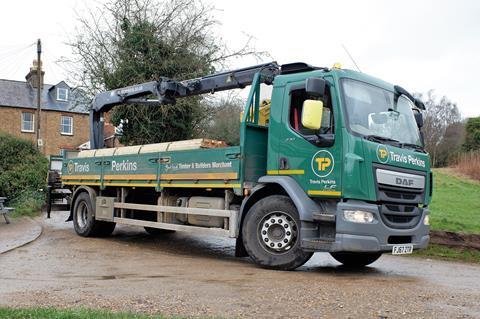 Travis Perkins has some 1,700 HGVs and 800 LGVs. It is trialling hydro-treated vegetable oil as fuel for its HGVs

At the start of this year, Travis Perkins had been predicting a rise in inflation of 2% or 3%. “Pre Ukraine, we thought the inflationary bar would be pretty stable. We weren’t expecting to see massive inflation. It felt a much more stable environment. Ukraine came along and without doubt that has caused input costs to go up again.”

He won’t say what he thinks the number will be this year but adds: “We are still going to be in quite a significant inflationary market. I don’t think it’s going to be in the twos and threes.”

Elkins says that the pipeline of its major customers, tier 1 contractors like Balfour Beatty and Skanska, remains healthy. Housebuilders, too, are still strong.

But despite an encouraging survey of its repair, maintenance and improvement (RMI) tradespeople earlier this month, with 48% of 1,500 respondents saying they expect workloads to increase, the squeeze on household budgets is keeping Elkins on guard. “We are very mindful of the cost of living crisis and what that means,” he says. “Main contractors, subcontractors and housebuilders – the outlook is strong. There have been some commercial projects getting pushed to the right, but domestic RMI is the area that would affect us if there was a downturn, the people deciding against doing an extension to their home.”

Availability of product shows no sign of being hampered by the rises in fuel, energy and transport costs, but Elkins says there are longer lead-in times on bricks and blocks and on roofing tiles. And he admits the firm has “seen some significant price increases in different product areas. We will challenge [the rises], and we do challenge.”

The firm is responding by driving efficiencies among its customers as well as within its own business. It is, for example, now prefabricating wooden staircases and floors, rather than seeing them assembled on site and the offcuts chucked into a skip. With its civils contractors, Elkins says rather than dropping off product to a compound on a highways job and the contractor then moving it into position, the firm is doing this itself.

It is making it easier for trades to get product from its yards via an app which has had 500,000 downloads and is cutting out time-consuming form-filling at depots which frustrates tradesmen and clog up nearby roads and the yards’ set-down areas. 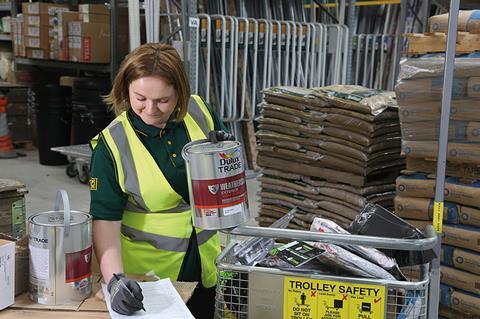 The Travis Perkins app for trades to get products from its yards has had 500,000 downloads

Its BSS business has created a system to allow it to scan its boiler rooms and tag every item in them, creating a digital twin so that commercial clients, such as those for schools, prisons and hospitals, now have an idea what plant might need fixing or upgrading. “It provides a real added value to customers,” Elkins says.

Closer to home, it is experimenting with how to fuel its vehicles. Travis Perkins has around 1,700 HGVs and a further 800 LGVs. It is trialling hydro-treated vegetable oil which can cut CO2 emissions by as much as 90%. “If you look at our carbon footprint, then our fleet is the highest contributing factor.”

The firm has a fleet of forklifts at its yards which run on electricity, although Elkins says the technology is “not there yet” for the firm to switch to electric vehicles for its HGVs.

He is speaking on the day the latest official figures showed construction in March this year reached its highest ever monthly output since records began in January 2010. In a trading update last month, Travis Perkins said revenue in the first quarter to the end of March was up 13.6% on the same period last year.

All seems well but Elkins remains wary. “In reality, the market is holding up reasonably well. But we are very mindful of the macroeconomic conditions right now.”

Taking it lying down

Going to Aberystwyth University was the making – and in one sense breaking – of Frank Elkins.

There he met his wife, Sue, who was studying economics and politics. He had arrived on the Welsh coast from a small New Forest village called Bransgore committed to a career in farming. Rugby union was his passion and scrum half his position. One evening he misjudged a tackle on an oncoming prop forward and broke his neck. It was spring 1985 and he was nineteen.

“It was a poor tackle; I got it all wrong,” he recalls. The next thing he remembers is being taken into the local hospital on a stretcher with a neck brace on. He was told he had a compound facture that would require him to lie perfectly flat on a bed for the next six weeks.

“It was the saving of me,” he adds. “I was probably having too good a time at university and hadn’t done an awful lot of studying, and the fact that I was strapped to a bed for a month and a half meant that I did the reading I should have done.” He was wearing prism glasses, the kind snooker player Dennis Taylor was swearing by on the hospital television, to help him win that year’s world title. 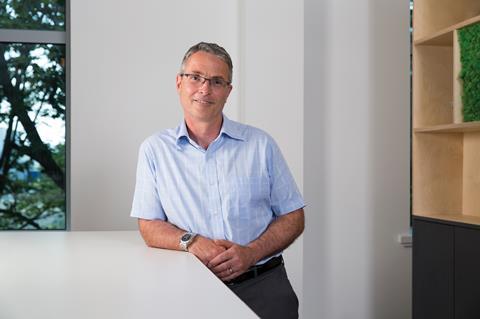 In a scene simply unimaginable now, he decided not to tell his mum and dad about his ordeal. “A week before, my mum’s dad had come off his bike and he was in a coma. I’d been told I was going to be fine, so I thought: what is the point of telling them? I didn’t want to worry them further; they had more than enough on their plate. After hospital, I went home and said: ‘I’ve got something to tell you.’ Apparently, when I called them on the hospital phone I sounded quite normal.”

He got used to it and the obvious complications of being stuck in the same spot for the best part of two months. He had one more go at rugby but decided to call it quits. “At 19, you think you’re invincible, but I did sort of look at myself and go, ‘Frank, what the bloody hell are you doing?’ I stopped playing rugby and started playing hockey.”

He tacked business law onto his land management degree because he was falling out of love with the idea of becoming a farmer. And it was at one hockey match that he met the man who would introduce him to Newey & Eyre which, eventually, led to Travis Perkins. He lives in Warwickshire, has a bit of land on which he pootles about on his tractor, rekindling his love of farming. His daughters, Anna and Laura, are at or about to go to university. He still loves rugby so it’s handy Travis Perkins sponsors Northampton, the longest-running deal of the rugby Premiership. Just a shame, then, he supports Bath …