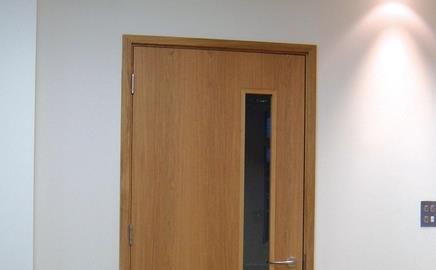 Meet James Johnson & Co, a joinery company from east London that has built and fitted everything from glass toilet doors to silky service accesses in the capital’s offices.

James Johnson Joinery is a fit-out specialist based in Plaistow, east London. The firm specialises in bespoke new build and refurbishment joinery, concentrating mainly on the lucrative commercial office fit-out market in the City. The firm is subcontracted mainly to larger contractors like Mitie, Bovis and Overbury and employs about 30 people in its fabrication works, with the same number again on site. Project contracts range from £150,000-2m, and the company turnover last year was about £8m. Mike Craven, the managing director, talks about building up his joinery firm from scratch.

I came out of a carpentry and joinery background and have been working in this industry all my life. The firm started out small, with a turnover for the first few years of about £300,000. Our first jobs really came out of contacts we had made through working at other companies. The work came in slowly at first, but one of our partners at the time, James Johnson, had worked previously with Deloitte and Touche. They took us on for some of their projects, and we gradually managed to build up a good client base. Twelve years later and with a turnover of £600,000 passing through it every month, we're planning on expanding to a larger factory.

Our relationship with architectural firms seems to have altered a lot over the years. The nature of contracts has changed, and in our line of business, there’s a lot more design-and-build projects out there than there used to be. There’s more emphasis on design intent drawings and performance specified work and getting out quickly than there was under traditional contracts, when you’d hang around waiting for the architects to design a door detail that simply didn’t work and was unbuildable. I prefer it the way it is now really. We have our own in-house drawing office, and meet the design requirements with detailing that we know will work. Under the design-and-build contract, though, there’s a lot more responsibility on us to get door specifications right.

With door joinery, everything is driven by fire regulations, the Disability Discrimination Act and of course, cost.

Every job we do always has a very tight programme, and when it’s like that, issues always arise on site. We recently worked on a £1.1m contract as part of Coleman and Partners’ £14m refurbishment and fit-out for the developer D2 Private in Saint James’s Square in Piccadilly, west London, where all the doors were high spec with bespoke detailing on both the new and traditional ones. We had to make sure the glass toilet doors were code-compliant, and work out with the architects on how to detail the frames so that they wouldn’t be prone to breakage when in daily use. There were also problems with the detailing of service access fire doors which were masked by special silk-covered lift-off panels, effectively doubling up on the number.

Because we come in at the end of the project, everyone has to hit the ground running, and it can make jobs really demanding. We worked on a £1.3m contract for the Bank of America that ran five months late for us. We could only move in when the wet trades had gone, and the client ended up having to swallow the additional costs. Sometimes, the programme demands don’t let you sort these things at the outset. Maybe more time should be spent at the beginning sorting out the design to avoid the penalties further down the line.

The world according to ...

Anything that prioritises quality over budget. We worked on a job for a client where we were installing internal doors in his private home along with library shelving and panelling to the tune of £480,000 – a crazy budget, but a great project.

Our best recent innovation is ...

CNC drawing to CNC interfacing. We’ve done a number of curved projects, and these cutters make all the difference to the project. At the Deloitte Academy we were having to design curved veneered walls and doors. You do the CAD drawing, put it through the CNC software, and the machine cuts the timber as you watch. They do come with a hefty price tag though – the really good machines can cost £500,000.

The worst piece of red tape was ...

Converting toilet blocks in a government building to provide additional disabled access in a place that was being knocked down in three months’ time.