5
Nothing to it: hollow concrete piling
Focus

Nothing to it: hollow concrete piling 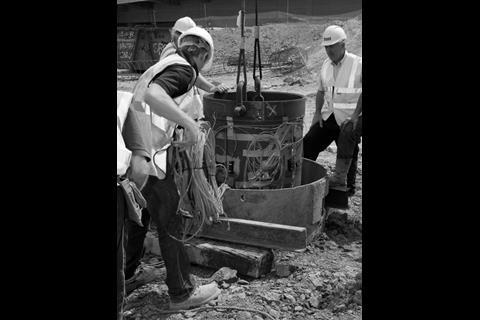 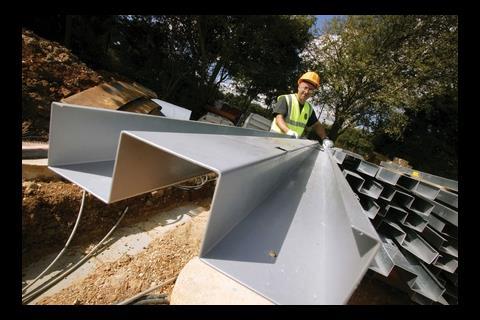 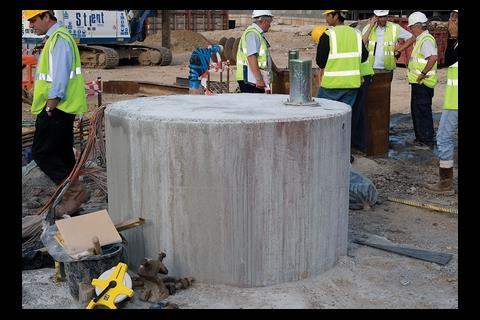 When engineering contractor Stent wanted to improve the sustainability of its concrete pile foundations, it came up with a surprisingly simple solution. Make them hollow.

Buried deep in the ground on a site in north-west London, two almost identical pile foundations have been put to the test. They’re both made out of concrete, have the same lengths and diameters, and are designed to support the same loads. But one uses almost half the concrete of the other and, if all goes to plan, could provide a massive leap forward in the battle to slash the embedded energy of any building’s structure.

Foundations might often be overlooked by designers in the pursuit of sustainability, but for engineering contractor Stent, the opportunity hadn’t escaped them. Viv Troughton, the firm’s engineering director, says the trials came out of a broader sustainability initiative within the company: “We began looking at the carbon content of the materials we use in the various pile products we produce. As a result, it was pretty evident that what dominates the equation is the concrete.”

The focus for Stent became how to reduce the massive quantities of concrete it was using. The contractor approached its long-term collaborator, City University, which had the idea of the City Sure Pile – a hollow concrete pile. The concept is simple: the size and shape of the pile remains the same, but the central section is hollow.

According to Troughton, if it worked, it would provide a way of substantially reducing the amount of concrete required, but there could be other advantages, too. By having a void, it would allow the pile to be inspected, which would open up the opportunity to reuse it if the site was ever redeveloped. “You would be able to look down into the void and inspect the pile, maybe drill through the side and inspect the surrounding ground or even carry out some enhancements,” says Troughton.

There was another angle – the void could be adapted for other uses, such as rainwater storage or to create some form of energy pile connected to a ground source heat pump.

How does a hollow pile perform?

Stent thought the idea was feasible and spoke to clients who showed interest in the sustainability benefits. But there were technical questions that needed answering. How would it perform structurally, would it be buildable and how durable would it be?

To test the concept, the contractor set up a trial where two piles, both 1,200mm in diameter and 27m long with a design load rating of 4,500kN, were installed in the clay ground next to one another. The only difference between them was that one had an 800mm-diameter void running its entire length.

For Stent, this was the first attempt it had made at constructing a hollow pile. The process starts out in the same way as a solid pile with a temporary casing sunk through the upper layers of unstable ground into the clay below. The hole is then drilled out to the necessary depth. It is at this point that extra work is needed. First, a steel tube is dropped down into the hole to create the void at the centre of the pile and a 1m-deep plug of concrete placed at the foot to provide the pile’s end-bearing capacity. Concrete is then carefully placed in the void between the steel tube and the surrounding earth using a specially fabricated steel tremmie – a technique whereby a high-flow concrete mix is pumped into the bottom of the hole through a pipe and allowed to rise. This approach was used to overcome fears that the concrete wouldn’t fully fill the narrow void.

We need to speak to clients, to make sure the cost of the installation is reasonable in terms of the benefits it offers

As Troughton explains: “Because it is such a confined space, you could get arching of the concrete – where the concrete jams between the steel tube and the surrounding ground – resulting in a pile with lower shaft friction.”

Currently, the inner steel tube stays in place once the concrete has set, becoming an integral part of the pile and contributing to its structural performance. However, says Troughton, for future developments, one of the areas they will be looking at is the possibility of using a removable former instead. “When we have the full data back on the test piles, we’ll be making note of how much the tube is contributing to the structural performance. It may be that if we use a removable former, we have to increase the reinforcement in the pile instead.”

Another area earmarked to be looked at is the design of the pile cap. While this is the same size and shape as the one used on the solid pile, it has been designed to transfer the loads into the hollow section. “What would be ideal for the follow-on contractor would be if you could build the column straight off that cap, making it an even more attractive proposition,” says Troughton.

So how did the hollow core pile actually perform? Results back from the trial are promising. Under the design load the settlement of the solid pile was 3.9mm, compared to 4.3mm for the hollow pile. This is well within tolerances, which usually specify a maximum settlement equal to 1% of the pile diameter, or in this case 12mm.

The exact reason for its superior performance isn’t yet fully understood and will only be known when the test data is analysed in the coming months. Troughton hazards a guess that it might be a result of the concrete plug that was used to create the end-bearing capacity for the pile. “Putting that in place soon after you have dug the hole may influence the degree of softening of the clay at the bottom of the hole; the softer it gets the worse the pile performs,” he says. Another factor might be the contribution of the steel tube to the piles’ structural performance. Ultimately, though, it means the hollow piles could carry greater loads.

At this stage, figures for the carbon saving haven’t been calculated, but the hollow piles use 44% less concrete compared to the solid piles of identical diameter. On top of that, there are lower emissions from the transportation.

For Stent’s Troughton, the findings are encouraging. “The results I’ve seen so far show that the concept works,” he says. The next step is to look at the data from the trials to get a full understanding of how the loads are transferred through the pile and how the design might be refined.

“First of all, we need to look at how the installation process might be improved,” says Troughton. ”Then we need to speak to clients, to make sure the cost of the installation is reasonable in terms of the benefits it offers them.” Early signs, however, look promising.

Another way to save embedded energy

Designed as an alternative to strip and deep trench foundations, it comprises prefabricated galvanised steel beams (pictured) spanning concrete pile caps. Pre-cut high-density polystyrene slabs in metal supports then sit on the beams, onto which is cast a concrete screed to create a lightweight and highly insulated floor slab.

Roger Bullivant is claiming dramatic savings in carbon emissions, water consumption and raw materials. It says that compared to traditional trench-fill foundations for a house with an 80m2 footprint, CO2 emissions are reduced from a typical 73 tonnes to just 13 tonnes. Water use is reduced by almost 90%, from 36,000 litres to just under 4,300 litres. On top of these figures, the company also cites a 75% reduction in construction time on a traditional house foundation construction with consequent cost savings.