Now the party’s over…

Aside from rhetoric, what did we get from the party conferences? Building looks at the prospects for action on key funding areas 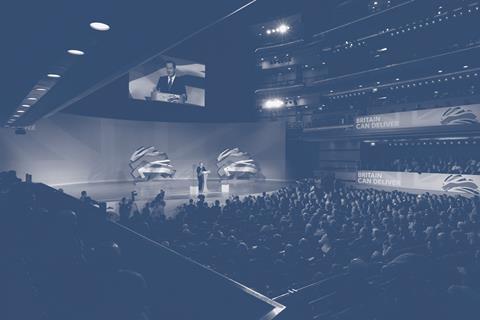 Party political conferences are often more about grandstanding than the unveiling of detailed policy and so it proved with this year’s season.

As Building predicted in its pre-conference issue a month ago, “grand promises and empty rhetoric” were largely the order of the day at the annual Lib Dem conference in Brighton, the Labour gathering in Manchester and the Tory get-together in Birmingham.

The lack of concrete action announced is worrying, given the ailing state of the industry - which is set to lose an eye-watering £8.5bn worth of activity over 2012 and 2013, according to the Construction Products Association. But it would be wrong to conclude that the party conferences were a damp squib.

In fact, representatives and lobbyists from many industry sectors have returned home positively buoyant for the simple reason that Olympic year 2012 looks like being the year that the politicians finally got it.

“We really didn’t get anything out of the party conferences,” says Richard Threlfall, KPMG’s head of infrastructure, building and construction. “But it’s very encouraging that all three parties were saying at their conferences this year that infrastructure is a vital plank of the competitiveness of this country and key to reversing this country’s economic difficulties.”

As Threlfall suggests, infrastructure, along with housing, were dominant themes at all three conferences with politicians of red, yellow and blue lining up - in keynote addresses as well as fringe events - to discuss how stimulating these areas will be critical to economic growth.

There is also a perception out there that the coalition may be about to relax its deficit-reduction programme given that the timetables have already slipped.

As Noble Francis, economics director at the Construction Products Association, says: “There seems to have been a sea change because we are not going to meet the 2015 deficit target. That opens up the possibility for capital investment in housing and infrastructure.”

So what has the conference season led us to hope and expect from the government in terms of turning words into action?

Will chancellor George Osborne’s misleadingly named Autumn Statement, due on 5 December, fulfill construction’s expectations and crucially, what are the prospects that the coalition - desperate to pull the country out of a double-dip recession - will dilute its programme of austerity with a bout of direct spending on capital projects?

The Lib Dem conference was notable for launching an infrastructure forum to drive implementation of the country’s National Infrastructure Plan. The forum aims to foster closer links between the government and industry to help deliver the plan. The newly formed Infrastructure Alliance was also busy lobbying Lib Dems and Tories.

expectation …
Only one infrastructure project has so far benefitted from the £40bn UK Guarantees scheme - the £1bn Crossrail train contract. Many expect Osborne to give details of more conventional schemes to be included, boosting confidence in the scheme.

… and hope
Given that spending on infrastructure is set to fall 13% this year compared with 2011, many would like to see the government opting to spend directly on this part of the economy, and setting out how the workforce will be upskilled to deliver infrastructure.

Observers would like to see the government release further details of how the energy market will underpin the construction of a new generation of nuclear power stations. There have also been calls for the coalition to reintroduce the Industrial Buildings Allowance, a tax incentive for big capital projects phased out by former chancellor Gordon Brown.

The government is looking at repairs and maintenance work as the sector’s best short-term means of growth. Although he made no spending commitments, Danny Alexander, Lib Dem minister and chief secretary to the Treasury, said the government would examine the idea of relocating savings from other departments or bringing forward spending from later in parliament to boost this area.

expectation …
There is a strong expectation that Osborne will set out further details of how the government intends to divert spending from other areas into repairs, maintenance and minor works without triggering any overall increase in spending.

… and hope
Because repairs and maintenance is largely controlled by council frameworks, it is seen as being both shovel-ready and beneficial for local communities. Many hope that the government will choose this area - rather than new-build housing or infrastructure - as the target for any additional spending announced in the Autumn Statement.

A call for more spending in this area was made by Judy Lowe, CITB-ConstructionSkills deputy chair, at the Tory conference.

Housebuilding was the issue of the moment at all three conferences, with numerous fringe events devoted to it and prime minister David Cameron claiming that its importance went far beyond its status as a “vital engine of the economy” and acknowledging that “we need to build a lot more houses in Britain”.

expectation …
Given the consensus on housing as a catalyst for growth, the chancellor is likely to set out further details of how schemes such as FirstBuy and NewBuy and the £10bn loan guarantee scheme for the homes for rent sector are being implemented.

… and hope
Some would like to see more direct funding for projects handled by the Homes & Communities Agency, which is currently running the £570m Get Britain Building campaign to “unlock” up to 16,000 new stalled homes. The great hope, though, is that the government will tackle what is widely seen as the primary barrier to increasing housing supply: mortgage availability.

Discussion of PFI or its replacement was sorely lacking at all three conferences - perhaps an indication of just how unpopular that acronym at least has become.
Chief secretary to the Treasury Danny Alexander announced before the conference season began that the government would announce its plans for the future of PFI in
the “autumn”.

Following its long-running review of PFI, the government is very close to announcing a rebranded form of
the procurement method and is expected to set out the details in advance of the chancellor’s Autumn Statement.

Should this happen, Osborne could in theory use his statement in December to set out details of how this new public/private arrangement would finance the construction of a whole raft
of public projects, with the Priority School Building Programme a key part of this.

What would the opposition do?

The construction industry featured prominently in the Labour Party’s vision of a “one nation” Britain, set out at its party conference in Manchester, writes Iain Withers.

But - unsurprisingly for an opposition party conference - there was little detail on policies that would tangibly benefit the construction sector come an election in 2015.

The one budgeted yet still theoretical proposal was a promise by shadow chancellor Ed Balls to spend the £3bn proceeds of a government auction of the 4G spectrum to mobile operators in 2013 on the building of 100,000 affordable homes and the introduction of a stamp-duty holiday for all homes under £250,000.

The prominence of construction and housebuilding at the Labour Party conference has been given a cautious welcome by the industry. Roger Humber, strategic policy adviser to the House Builders Association, says: “There seems to be a broad political consensus that we need to build more housing,” but he adds that Labour needs to be clearer on how it would tackle “immediate problems with bank lending and over-regulation”.

On the fringes of the conference, shadow housing minister Jack Dromey revealed that Labour would launch a “network of innovation” among local authorities looking to increase their housebuilding output in the next two months.

Dromey said the network would bring together councils that used their own resources to build homes to share ideas on how to unlock developments. The network will be launched at a “major housing event” this autumn.

Another development of interest was Labour’s bid to portray itself as the party of vocational training and apprenticeships.

Labour leader Ed Miliband said in his keynote speech that, if elected, his government would focus on the “forgotten 50%” of children that did not go to university, with the introduction of a “technical baccalaureate” including vocational training between 16-18.

He added that all firms working on government contracts would have to employ apprentices. In return, businesses would be given control of designing and running vocational training courses.

Nick Gooderson, head of education and training for CITB-ConstructionSkills, says such announcements on vocational training will be “welcomed by industry”.

On infrastructure, Labour announced that Olympic Delivery Authority chair Sir John Armitt would run a commission to build cross-party consensus on major infrastructure projects.
Balls mocked the government for putting off “major decisions” on infrastructure and said a new approach was needed to meet the country’s long-term infrastructure needs.

The Armitt commission will consider if “we can have a commission or body independent of government that can assess and make proposals on the long-term infrastructure needs of the country over a 25 to 40 year horizon”. Armitt will report to Balls in summer 2013.

The Labour Party also carried a motion condemning the use of blacklisting in construction. The motion does not automatically become policy, but informs the creation of policy for Labour’s next manifesto.